Cleaning up the frontyard

Cleaning up the frontyard 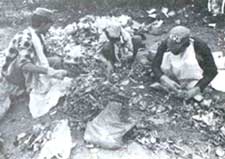 EVEN New Delhi's misty winter cannot obscure the city's muck. Mounds of garbage appear at almost every twist and turn of Delhi's sidelanes because the Municipal Corporation of Delhi's (MCD) antiquated trucks and wayward workforce cannot cope. Concerned at the deteriorating situation, some neighbourhoods in south Delhi have picked up brooms themselves.A report by Srishti, an environmental NGO, says that 1,500 tonnes of garbage are left uncleared every day. The MCD's attempts to eliminate garbage have been a non-starter. A Danish incinerator installed at Timarpur in north Delhi to generate 3.5 MW of electricity failed because of the garbage's low calorific value. A semi-mechanised system of composting being tried out at Okhla was also no good because of frequent breakdowns at the plant, blamed on the garbage being too wet.

Says K J Alphonse, the Delhi Development Authority's land commissioner, whose organisation Jana Shakti attempts to increase public consciousness about the garbage problem, "For government civic services to function, there has to be public accountability. This can only be ensured by people. If the mcd doesn't pick up your garbage, harass them till they do it."

But rather than relying on the elusive MCD truck, some Delhiites are themselves taking the initiative to dispose of the garbage.At the affluent Asiad Village in south Delhi, Srishti provided expertise to the local residents' association to do this: 150 of the 846 families living in the Village backed the cleanup programme which began last August. Attempts are on to convert Asiad Village into Delhi's first zero-garbage colony.

Srishti held classes on garbage handling hazards, different types of waste, and composting methods. Today, 650 houses have joined the movement. Garbage clearance costs the association Rs 4,770 per month. This includes the cost of uniforms for the cleaning staff, trolleys and superphosphate for composting. The garbage contractor is paid a salary of Rs 1,000 and is allowed to sell off the recyclable constituents -- plastic, paper, glass and metal. Since 1994, biodegradable waste is being composed after being sorted out.

Srishti director Iqbal Malik says that, ideally, waste must be disposed of in separate packets -- biodegradable, nonbiodegradable and toxic. However, malba (rubbish) is dumped off surreptitiously by residents at night, against the association's directives. Malik says that the only solution is to legalise malba dumping in an allotted space.

In Greater Kailash I Enclave, a posh south Delhi colony, the residents' association got fed up with rising mounds of garbage, and in mid-September 1994 hired 25 trucks over a period of 2 months to remove accumulated garbage to the mcd's landfill site at Shahadara in east Delhi. It cost the association Rs 6,400. They plan to raise Rs 3 lakh and their own truck.

Contends association president P L Sharma, "Since garbage disposal has become virtually privatised, why should we pay a scavenging tax to the MCD?" There has been a perceptible improvement and the garbage collection cost has fallen to Rs 1,500 every month.

In the low-income Ashok staff quarters situated behind the Samrat Ashok hotel and which houses about 300 families, Srishti provided steel garbage bins on each floor. The garbage collector is paid Rs 500 per month by the Ashok hotel management.

But sanitation is a problem in the building. The flush system of the community toilets collapsed 3 years ago and has still not been repaired. Human waste is dumped into the MCD bin outside.

Srishti has recommended MCD landfills to be located within the reach of the residential areas to enable easy composting. And a landfill need not be an eyesore: it can be designed as a park. The MCD clearly needs to rethink its strategies to reach out to the citizens.