Sadanand Tandel’s house is the dream of every tourist. A terrific sea view, waving coconut fronds and in a few dozen steps one can walk into the sea waves. Through Tandel’s eyes, however, the view is somber.

Till 1991, 30 of his coconut trees stood where the sea is now. The distance between the waves and the walls of his house is narrowing every year—not slowly and sur ely any longer, but at a terrifying clip. Tandel’s predicament is not very different from that of other residents of villages along the Konkan coast. Studies by a group of scientists from Pune indicate that the sea level along the west coast of Maharashtra has gone up by five-six cm in the past 20 years, making the tide move steadily inwards and the water level in the creeks to rise alarmingly. The reasons, they say, are global warming and disturbance from construction along the sea coast.

Sea level on the rise

Shrikant Karlekar, who heads the geography department at SP College in Pune and specializes in coastal geography, has been monitoring geomorphological changes along the Konkan coast from Dahanu, close to Mumbai, to Vengurle in south Sindhudurg for the past 20 years, along with faculty members and students. Their studies reveal the sea level rise has been mostly gradu al, with periodic episodes of a sudden ri se. The most recent episode was on the full moon night of December 29, 2009, when the high tide rose by 4 cm near Rat nagiri town. “The previous year on the same day the rise was 2 cm,” sa id Karle kar, who has written several pa pers on the phenomenon. “In recent years the sea level has risen at a much fast er pace than in the early years of our study.”

The five-six cm rise translates into the salt water intruding up to one kilometre inland, damaging mangroves, eroding beaches and filling creeks with sand and grit from erosion. The impact is more along the flatlands than in areas where the coast is rocky. Sindhudurg district with flatlands is the worst affected, while Raigad and Ratnagiri districts, which have rocky coastlines, have had relatively less impact, Karlekar said.

Tandel remembers the sea waves first entered his village Deobagh in Malwan tehsil of Sindhudurg during the 1978 monsoon. Since then the village has lost about 32 hectares (ha), mostly valuable coconut groves, to erosion because of two reasons. One, the rising tides and two, the rising level of the Karli creek. The village is a strip of land extending into the sea, with the creek to its south and the sea to its north and west. 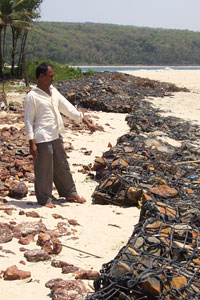 Tandel’s house now stands on the very tip of the land. He is one of the 70 residents of the village who have lost land to the sea. “In the 1980s the sea was more than 300 metres from my house and some 1,000 saru (Casuarina equisetifolia) trees were planted to protect the coast between my grove and the sea,” he said. Today the sea is 40 m from his house. In village Tondawali, some 20 km north of Deobagh, the hamlet of Talasheel is reduced to a thin strip, 300 m to 500 m wide and seven km long, between the Kalawal creek and the sea.

For a 300 m stretch the width is just 100 m. “One strong monsoon tide could wash away this stretch,” said former sarpanch Jayhari Kochrekar. In the past 15 years, the village has lost around 40 ha, inform residents. This includes about 500 coconut trees, saru and nirgudi (Vitex negundo) plantations and space for drying fish. Lakshmi Kochrekar had to rebuild her house twice in five years because of the rising level of the creek. “I have no more land to move to now,” said she. Many residents are finding the monsoon tide reaching their homes.

Moving up along the coast, in the Deogad port city, fishers and fish driers say the sea has been swallowing land used for beaching boats and drying fish for over a decade. “It has swallowed more than 25 m up to the hill, which separates the port from the town,” said fisherman Milind Borkar.

Erosion by the rising tide has turned the Deogad cove shallow, hitting small fishermen. “We do not have big boats that can go into the open sea,” said Mohan Keluskar. “And hardly any fish is left in the cove.” Village Wadatar along the Deogad creek has lost its paddy land and groves of Alphonso mangoes, said elderly resident Shridhar Wadekar.

Villages, like Achra and Tarkarli in Malwan, with rocky coastlines have not felt the impact of the rising sea level yet, but villagers report slow submergence of distant rocks in the sea. According to the state Harbour Engineering Department, 45 km of the 120 km Sindhudurg coastline is prone to erosion.

Sea does not return land anymore

Village elders say the very behaviour of the sea is changing. Patterns of erosion and deposition, and tides are not the same. While tides are eroding more rapidly, deposition of the eroded material is not happening like before. “We have a saying that the sea brings back whatever it takes,” said Wadekar. “But for the past two decades I have been waiting for it to bring back my rice farm.”

Elderly citizens at Talasheel agree. Matriarch Sunanda Kochrekar said erosion by the sea has long been accepted as inevitable. “During the monsoon every year the tide would erode part of the beach,” she said. “But after Diwali deposition would restore the coastline to mo re or less the same position.” For two decades the deposition is not happening. Vaishali Sawant of Deobagh even has a measurement for the sea’s erosion pattern. “It was said in our childhood that every year the sea advances by the length of one bamboo stick during the monsoon and recedes after Diwali,” she said. But in recent years the sea has only been advancing with no signs of receding, she added, looking at the lapping waves barely 30 m from her backdoor. 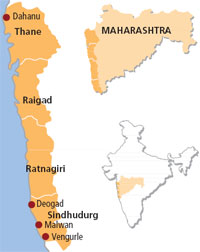 The pattern of tides has also become irregular, residents have noticed. Jaihari Kochrekar and others in Talasheel say the tidal cycle, which was earlier guided strictly by the course of the moon, is not following the rules any longer. “Earlier, we had high tides at full and new moon, but nowadays we have sudden very high tides in the middle of the fortnight as well,” said Jaihari. In Achra, elderly resident Arun Sarang said the daily tidal cycle is also changing. “In my youth about 30 years ago, we used to set our watches by the noon high tide, which would come at 12 sharp. But nowadays the noon tide timings are changing from day to day by 20 minutes to an hour,” he said.

Karlekar, whose studies have relied heavily on people’s observations, said such observations are crucial but rued that no proper tidal pattern data is available to verify them. “In the West people are involved closely in monitoring tidal patterns with tidal gauges and measuring rods installed along coasts, resulting in an excellent data base,” he said. “On the Maharash tra coast, however, despite the fact that tidal gauges are installed, the Harbour Engineering Department neither maintains proper data of its own nor involves people in its collection and analysis.”

Karlekar said global warming cannot be ruled out as a reason behind the change in sea level because the scale is too large to be attributed to local reasons alone. People in the coastal region say ever since the Coastal Management Regulatory Board was set up over 10 years ago more ports and jetties have been built, bridges constructed across creeks and the ambitious coastal highway project has been launched.

In Talasheel, the water level rise in the creek at high tide has increased in the past few months since the construction of a jetty began downstream. “The jetty is blocking half the width of the creek, so that the water that enters it at high tide does not recede fast enough,” said Raghunath Tandel, whose backyard is fast becoming part of the creek. At Deogad work on a fishing harbour, which involved filling up nearly half the Deogad cove, was stalled months after it began. The residents of Anandwadi, a fishing hamlet on the other side of the cove, got a court to stay the work. “As soon as they started filling the cove the tide at our end started rising alarmingly, reaching houses,” said Dinesh Posam.

While people see siltation from construction as a serious problem, they do not oppose construction, especially of roads and bridges, because it implies better income and easy commuting.

The people demand two measu res: desiltation of the creeks and construction of bunds along the sea coast to hold the tide back. Common complaints are that the officials have ignored desiltation and bunds are of poor quality.

At Talasheel, which receives evacuation notices from the district collector every year in May, people complain they have not been given any land for relocating and that the bunds are being constructed very slowly and in wrong places. In Deobagh, a section of bund built by the Harbour Engineer ing Department in 2009, after nearly 15 years of chasing officials, came undone the same year during the monsoon. The crumbling stone bund is all that stands between the sea and Tandel’s house.

No government agency has studied the causes of the rising sea level and the extent or intensity of the problem. The response of the civic and government auth orities has been to ignore the problem for as long as possible and then bui - ld expensive bunds—costing Rs 60,000 per metre—in bits and pieces. Till date, about 10 km of anti-erosion bunds have been constructed in Sindhudurg, said the Harbour Engineering Department.

Officials rarely react unless the situation is serious. Malwan tehsildar Vinod Khirolkar said rising tides are affecting only Deobagh and Talasheel, ignoring that Bhogve, Rewandi, Dandi, Tondaw - ali, Sarjekot and other villages have also reported small amounts of land loss in recent years. Deogadh tehsildar Chand - rakant Mohite asked Down To Earth if there were reports of such problems in his tehsil since he had not heard of any. Karlekar said bunds and desiltation, both expensive options, are at best short-term solutions. “Bunds are being bre ached every year. They are at the most four metres high, and could be rendered useless in two or three years,” he pointed out. “Desiltation is important but unless construction work is checked more silt will accumulate in a very short time.”

What is needed, said Karlekar, is a comprehensive and large-scale study, assessing the rate of sea level rise along the Maharashtra coast. “What’s more, areas with rocky coastline need to be included in such a study before problems start arising there,” he said. Any long-term solution must address the causes of the destruction, rather than just remedial measures like the bund that gave only false sense of security to Tandel for a brief period. 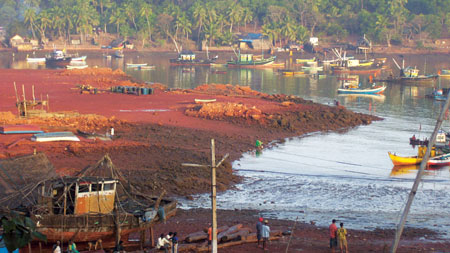