It only gets hotter

It only gets hotter 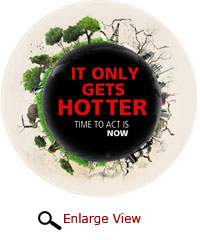 The Fifth Assessment Report of the Intergovernmental Panel on Climate Change (IPCC), released on September 27, paints a grim picture. Unabated greenhouse gas emissions, the report says, will push the planet beyond reversible changes. Scientists are more than ever sure that emissions from man-made inventions and interventions are responsible for the rise in global temperature. Unless we act fast, a full-fledged catastrophe is imminent by the turn of the century.

2°C Barrier Not Far Away

Two degrees Celsius is the threshold,Ã”Ã‡Ãªa rise beyond which could spell disaster. Each of the last three decades has been successively warmer than any preceding decade since 1850. In the Northern Hemisphere, 1983-2012 was likely the warmest 30-year-period of the last 1,400 years. In the last century it is believed that temperatures may have risen by 0.9°C. At this rate, the 2°C limit could be breached in the next 30 years and by the end of the 21st century temperatures could rise by 4.8°C, depending on how much we emit. IPCC says there is a 90 per cent likelihood that number of warm days and nights per year has increased.

There is more carbon dioxide, methane and nitrous oxide in the atmosphere now than in the last 800,000 years. Most of this has come from fossil fuel combustion, production of cement and land-use change. Fossil fuel combustion alone contributed about 40 per cent increase in CO2 concentrations since the industrial revolution. There is very little proof of solar, cosmic rays and volcanic activity playing a part in this warming. Scientist say 90 per cent of the heat trapped by greenhouse gasses has probably been absorbed in the oceans. The oceans have already absorbed about 30 per cent of the man-made CO2 resulting in ocean acidification.

Between 1901 and 2010, sea levels rose by 19 cm or, an average of about 1.7 mm per year. The rate of annual rise has almost doubled since 1993, to 3.2 mm. Sea levels could rise further by 26-82 cm by 2100. The rise may not be uniform everywhere, but most coastlines worldwide could see a 62 cm rise in worst-case scenarios. Thermal expansion and melting ice from the Arctic and Greenland would contribute the most to this rise. By September 2050, the Arctic could be completely ice-free while the glaciers around the world could lose 35-85 per cent of their volume by 2100. The world will see more frequent and intense weather events. Wet regions will experience increased rainfall. The intensity of tropical cyclones has already seen an increase since the 1970s.

The world will have to move away very quickly from fossil fuels if it wants to restrict temperatures from rising more than 2°C. Emissions cannot exceed 1,000 gigatonnes by 2100. However, by 2011, we had already consumed more than half of this budget.