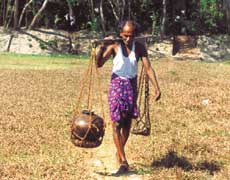 The 1930s-40s: The Indian National Congress (inc) calls upon Keralites to abstain from drinking toddy. The argument is two pronged: social and economic. Toddy tapping is projected as a debased profession that wastes the resources of the coconut tree.

Year 2001: Coconut prices drop drastically. Coconut growers, wearing garlands of coconuts, jump into the Arabian Sea as a mark of their anguish.

Year 2002: Priests, intellectuals, farmers, women and children in Kerala are all engaged in a defiant exhibition of toddy drinking on television screens: an attempt to reposition toddy as a 'family health drink'!

Toddy has traditionally served several functions in the agrarian Kerala society: helped gather workers for a harvest, and provided relaxation after a hard day's work. Toddy also strengthened the interaction and interdependence of castes, and created spaces for questioning power equations. Consumed in moderation, toddy was not considered an intoxicant. It continues to be a popular fermenting agent in Malayalee cooking. Even strong arrack, locally distilled from toddy, contains no chemicals.

Toddy, however, failed to ensure any semblance of respectability for the people and castes that tapped toddy. In pre-Independence days, the Thiyyas and Ezhavas were the primary toddy tapper communities. The repressive laws of the time forced many toddy tappers to go underground, or flee to Colombo. Toddy tappers were treated almost at par with 'untouchables', and their work was considered unclean. They were scared to even walk the streets. To add to this, they worked in conditions of extreme exploitation. Of the few annas that toddy shops would pay tappers, they were expected to pay rent to the coconut grower, buy tools and meet the expenses incurred in preparing the palm for tapping. Even households where two members were engaged in toddy tapping would often sleep on half-full stomachs.

Sixty-four-year-old M C Kuttan, a toddy tapper, believes, "This pathetic life of the Ezhavas forced Sri Narayana Guru, the social and spiritual reformer, to call upon Ezhavas not to tap, sell or drink toddy." Kuttan loves his job, taps his quota of eight palms twice daily, reads a lot and leads a simple life. He is usually attired simply in typical Gandhian attire. "The Guru also exhorted the community to organise themselves," he points out.

It was in these circumstances that the Chethu Thozhilali Union (ctu) emerged. Around this time, communism was also beginning to gain ground in Kerala. The persistent struggle of trade unions and the ctu eventually led to a vast improvement in the condition of the struggling community. Toddy tapping in Kerala was taken away from private contractors, and handed over to cooperative societies.

Today, toddy tappers get their wages on time, have an organised leave system along the lines of corporate set-ups, and a host of other benefits. There is provision for proportionate dearness allowance, an allowance for preparing the palm for tapping, 23 days' casual leave, 12 days' sick leave, double wages for working on off-days, carrying charges for bringing toddy to the collection point, equipment and tool allowance, annual bonus, accident compensation and treatment allowance.

The stigma attached to toddy tapping has also come down by a long way. In spite of this, toddy tapping as a profession does not find many takers among the youth. People like Unniraja, who holds a post-graduate degree and a part-time teaching job, and also works part-time as a toddy tapper, are the exception rather than the rule. Says Kuttan, "Young people do not take to toddy tapping now; but that is largely due to a general aversion to manual labour rather than fear of social stigma."

Toddy tappers, however, fight new demons today. The government's excise policy is pushing the delicate balance of the tappers' trade to the limits of endurance. Researcher T G Jacob explains, "The excise policy is utterly perverse. The maximum output of toddy in a range is around 1,000 litres a day, which will yield an income of Rs 35,000. The expenses including the kisth (contract fee) money to the government comes to about Rs four lakh a day. The disparity is enormous; this is why spurious toddy has flooded the state." Kuttan points out, "To run the shops without loss, the Anthikkad range in Thrissur needs a daily sale of toddy worth Rs three lakh. But production levels are not commensurate with this."

Private contractors have added a number of things -- from spirit, chloral hydrate, white paste, extract of cannabis roots to even diazepam tablets -- to toddy, in order to earn that extra bit. While pure toddy should have six to eight per cent alcohol content, the alternative today contains close to 40 per cent alcohol -- not quite what one would call a 'family health drink'. "If you add 0.44 mg of chloral hydrate to one lakh litres of toddy, you can sell more than five lakh litres of spurious toddy. In other procedures, like mixing white paste with water or pure spirit, toddy is altogether dispensed with," says Jacob.

Cooperative societies are reeling under pressure from a bankrupt state that is bent on sapping the industry dry. Most of the benefits that toddy tappers struggled long and hard to gain are as good as lost again. Dissatisfaction with cooperative societies is also palpable among toddy tappers across Kerala. It seems the only thing holding them back is a hangover of the halcyon days of trade unionism. "Those who condemn the 'society system' and demand the return of the 'contractor raj ' have only self-interest in mind," criticises Sankaran, a Centre of Indian Trade Unions (citu) leader in Thrissur.

Since the 1940s, the pace of life in Kerala has been rapidly changing. The move from the collective, festive drinking of toddy to individualised drinking of stronger brew -- first arrack and, after its ban, Indian Made Foreign Liquor ( imfl), has fanned the growth of individualism and consumerism in the state. imfl now meets the Malayalees' increasing thirst for liquor.

The rise and fall of the toddy trade has been simultaneous with the rise of a new class of small farmers, interested in the production and spread of coconut as a cash crop, aided by the temporarily high market price for coconut and coconut oil. Traditional farmers would rent out their palms for toddy tapping every alternate year (thus earning from the yield of nuts as well as toddy). The new generation of farmers is only interested in the cash crop potential. This is one of the greatest threats that toddy tappers face today. Toddy is, therefore, being projected as a viable money-making alternative.

Former chief development officer of the Coconut Development Board (cdb ) P K Thampan explains the unviability of the new model, "A recent study had shown that the total annual income from tapping the toddy of some 1,500 palms in 10 ha stood at Rs 60,75,000, with a net income of Rs 37,12,500. The net income per ha came to Rs 2,36,250, which was seven-eight times more than that obtained from coconut production."

"We do not want toddy production to replace coconut plucking," say Farmer's Relief Forum (frf) based in Wayanad activists. The organisation has mooted a new set of production structures at the local level -- organic cooperatives involving the growers, toddy tappers, consumers and government. "The developing struggle for the restoration of the rights over the principal tree of the land can grow into a larger struggle for recapturing the self-respect of the people through creating their own economic and political space," argues A C Varkey, frf chairperson.

This is where the toddy trade in Kerala is stuck now: between choosing the contractors' methods for value addition and searching for viable alternatives. Toddy tappers have come a long way from their days of shame and ignominy to a life of respect and dignity of labour. But there is no rest yet. With the government thinking of reverting to the private contract system, toddy tappers are a worried and insecure lot today.