Coimbatore attempts to save waterbodies

Coimbatore attempts to save waterbodies 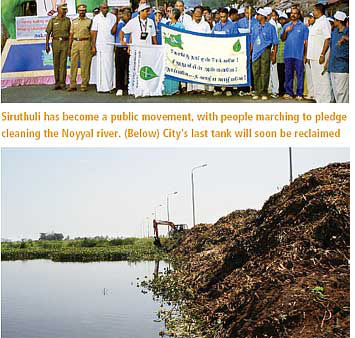 In times of crisis there are two things one can do: crib and cry or do something about it. When the groundwater in the industrial city of Coimbatore plunged to 300 m at some places four years ago, its corporate houses and residents opted for the second way out: they took matters into their hands.

All the eight natural water tanks in Coimbatore were silted and clogged with garbage following large-scale construction activity since 1998. The dried riverbed of the Noyyal, running alongside the city, was encroached upon and channels leading to it clogged. Low rainfall aggravated the problem. According to the Coimbatore municipal corporation's Citizens' Charter, the city's daily water supply shrunk a fifth. Agriculture, the main activity of the people in the suburbs, was affected.

"Water shortage was really acute; we decided to do something about it," says Vanitha Mohan, executive director of Premier Instruments & Controls Ltd. This was when Siruthuli--meaning a small drop in Tamil--was formed. A clutch of corporate houses came together to desilt the water tanks and the channels to the river; they pooled Rs 25 lakh each and asked people to chip in more.

It worked. Starting with Krishnampathy, seven tanks have been desilted and store 6,485 million litres of water. This means adding 17 million litres per day (mld) to the city's supply, which was 25 mld against the requirement of 120 mld.

The silt collected was used to strengthen the bunds of the tanks and to expand roads. Alongside restoring the tanks, Siruthuli began roadside water harvesting. With the help of the corporation, it constructed 150 deep bore wells with recharge pits and filter chambers to harvest the rainwater from roads and open spaces. Today the water table has improved. "The groundwater level in my farmhouse has gone up by 50 feet in the past three years," says Radha Srinivas, a resident of Bharathi Nagar. "Our bore-well was submerged and I had to bring the motor up by 30 feet," says Kasturi Giri, another resident.

According to the Central Ground Water Board, Chennai, the groundwater level in Coimbatore has come up by 30-50 feet in the past three-four years. "I would not say that the water level has come up only because of an ngo's work. There has been good rainfall in the past few years and all 23 tanks in the district have filled up. But certainly, Siruthuli has contributed positively in generating concern about water," says Neeraj Mittal, the district collector.

Once people saw the results of conservation efforts, Siruthuli became a public movement. The attention shifted to the Noyyal. On October 2, 2005, over a lakh people walked 30 km along the river to pledge its restoration.

With the help of the district administration and the Public Works Department, Siruthuli has started removing the encroachments on the riverbed and building demarcation bunds from Solaipadugai where the Noyyal originates.

It is an expensive task--the entire project will cost about Rs 25 crore. The District Rural Development Agency has sanctioned Rs 10 lakh and a scheme was launched in 2005 to collect Rs 100 from every citizen of Coimbatore. One can find Siruthuli drop-boxes at shops and campaigns see a huge turnout of schoolchildren, farmers and professionals.

Raising funds is not the only challenge. Of the 25,000 families in Coimbatore's slums, over half are on the dried water bodies. "The slum dwellers are not there because they want to be there but because they have no other option," says Mittal. Rehabilitating them is no doubt difficult. But by now the citizens have learnt that nothing is impossible, provided they are ready to act.