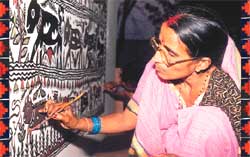 few realise that behind the colourful contemporary folk art of Mithila paintings is a powerful message of conservation and an indication of the region's rich biodiversity. Traditionally done in the Madhubani region of north Bihar, the paintings were originally made by women as 'aripan', used to decorate the floors and walls of their homes. Today, this art form has found its way into the cities as wall hangings, cushion covers, bed linen and even saris.

However, the paintings continue to depict a variety of flora and fauna and their benefits, thus acting as a rich repository of the local biodiversity. Even the natural colours used, which are extracted from both plants and animals, act as an authentic directory of the region. Moreover, the themes used in these paintings, which are extensively made during various religious functions and marriages, speak of the deep links between the people with the plant and animal world.

And it is this link that Sewa Mithila, an ngo working with the local artists, is propagating. Essentially set up to organise the painters and to provide a market outlet for their art form, the ngo found this message of conservation and biodiversity to be the paintings' usp (ultimate selling point).

According to a survey conducted by V Jha and P K Basak, two botanists from C M Science College, Lalit Narayan Mithila University, Darbhanga, as many as 14 plants have been identified, symbolising fertility, potency, good omen and reverence to deities. The natural colours used in this art form are extracted from some 40 plants and some animal products while around 10 plants are used as fixatives to the colours, the survey says.

Sewa Mithila began by setting up an 'ashram' of local artists, including poor widows and people from the lower economic rung. It soon found the paintings to be a vibrant medium to convey the message of environmental conservation, both among the local people and also the urban crowd. The ngo , which is working in the area of women's issues and mass education, also finds these paintings to be a useful tool for its campaigns.

As Gauri Mishra of Sewa Mithila puts it, "We have plans to protect the paintings as well as the biodiversity of the region." And the organisation has, to an extent, succeeded in this aim by creating a market for the paintings. Mithila art, says Mishra, is facing a threat due to growing pace of modernisation and non-availability of plants used to make the paints.

On the other hand, the ngo is also spreading the message of environmental conservation by explaining to the urban customers all about the paintings, the different plants and animals drawn in them and the various environmental themes depicted.

Some of the popular themes of Mithila paintings are the importance of trees, their medicinal values and other benefits, and the power of nature. Marriage of trees for their propagation is a popular painting. Of late, even environmental movements such as the Chipko have found a place in these paintings.

Since the late 1960s, this art form was transported to the medium of eco-friendly hand made paper. Once the paintings descended from walls to scrolls, they became more candid in expression. Many women started availing this opportunity to explore their individual artistic expression and experimentation provided by the availability of paper. From paper the transition was to cloth and different sizes of wall hangings, pillow covers, bed sheets and even saris are seen today embellished with this art form.
Another indication in the Mithila paintings is about the extinction of certain plant and animal species. V Jha found in his survey that tea (Camellia sinensis), saffron (Crocus sativus ), indigo (Indigofera tinctoria) and raktachandan (Pterocarpus santalinus) are not cultivated in the region yet used and obtained from outside. "It is clear from the traditional practice that the plants were earlier cultivated in the region. We also have evidence of cultivating indigo in north Bihar. Indigo cultivators have secured a place in the history of Indian freedom struggle under the leadership of Mahatma Gandhi," he says.

But now non-availability of some of the plants in the region and high cost of its extraction from plants have also restricted its use and people have started using other chemicals for the paintings. Preeti Agarwal of Kalakriti, a manufacturer and supplier of Madhubani paintings at Bela Garden in Darbhanga says, "Due to high cost and problem in procuring different plants in all the seasons and storing them for long has forced us to look for alternatives among chemicals."