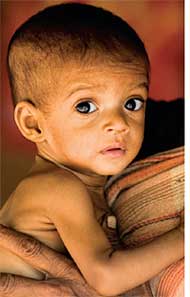 Over 40 children below five years of age died of malnutrition and related complications in Nandurbar--a tribal district in Maharashtra--between April 2007 and March 2008. Another 900 children are suffering from malnutrition. A local ngo, Lok Sangharsh Morcha, has revealed these startling data after a year-long survey of 22 villages in Nand-urbar's Akkalkuwa block.

The state government is contesting the findings. According to the Integrated Child Development Services (icds), of the 32 child deaths registered in the block in the last one year, only a 21-day-old child died of malnutrition. In March 2008, 16 children were found to be in the third and fourth grade of malnutrition (the worst-form of undernourishment) in these villages, say officials.They blame the disparity in figures on different weighing machines used during the survey.

The survey members, however, say they had followed all icds methodologies to ensure uniformity in data. "icds often understates the problem and hides almost 90 per cent of the malnutrition data since the district administration doesn't want to be blacklisted. There is mounting pressure on district collectors to play down the figures," says Pratibha Shinde, a member of the ngo survey team. "The government never admits deaths due to malnutrition and links it to pneumonia, diarrhoea, lack of breast milk and other ailments." 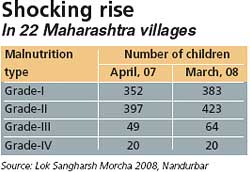 Generations of malnourished children are born in Nandurbar. The government claims it has been pumping money into various icds programmes to improve the scenario. But field realities do not support the claims. Check these official data Of 4,910 births in Akkalkuwa block in the year 2007-2008, 189 children died as newborns, 130 died between one and three years and another 63 died before reaching six years. The survey findings also show an increase in the scale of malnutrition in the last one year (see table Shocking rise) and raises a pertinent question why the icds programme is failing in Nandurbar?


Nandurbar is a hilly terrain and villages are far flung and inaccessible. In many villages, anganwadi workers don't visit remote hamlets, nor do children below three years of age come to the care centre as the mothers don't have time to drop and fetch them. "Most children in this age group thus remain out of icds' reach," says Aatish Jagtap, another member of the survey team. Even if an anganwadi worker realises that a child is suffering from malnutrition she can at best refer the child to the nearby primary health centre (phc). But going to phcs itself is difficult, owing to the lack of transport facilities. Besides, for already overworked doctors at these phcs, tackling malnutrition does not come high on agenda.

But this does not seem to be a priority for the government that has recently started a Bal Sudhar Kendra (child rehabilitation centre) in Khapar village. Parents have to leave their malnourished child at the centre for 10 days, during which the child is looked after and fed at least eight times a day.

ngos have already termed this a failure. "First, parents are not ready to leave their children for 10 days. Second, these children are born to malnourished mothers and hence have an under-developed digestive system. They cannot digest food even if they are fed 10 times a day," says Jagtap.

Experts working in the region link the chronic malnourishment to the socio-economic condition of the poor tribals and lack of access to forests, which used to be a source of affordable nutrition. Essentially constituting landless or small tenants, most families are food-deficit in these villages. Work under employment guarantee scheme is rare. Unemployment is so severe that most families migrate to Gujarat in search of work. Many children die during migration. Those who stay back do not have money to even buy subsidized ration.

It's time that the government looks at the issue beyond the singular health aspect of malnutrition.