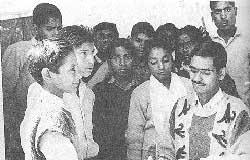 DAY after day last February, scores of students in an Uttar Pradesh village spent hours outside their classrooms. They were not playing truant -- they were in the fields collecting leaves and plants for a biodiversity competition.

The contest at the secondary school in Gangagarh village in Bulandshahr district was the third in a series begun last year. The previous competitions were held in Gangagarh and Vastrapur village in Gujarat.

The students were asked to gather as many species as they could and there was a special emphasis on medicinal plants. The collected specimens were evaluated on four counts: classification, appearance, habitat and use.

"The basis of sustainable development is a strong foundation of the knowledge of biodiversity. It is best to encourage its spread," says Pramod Jain, an alumnus of the Indian Institute of Management (IIM) in Ahmedabad, who, along with the Alok Charitable Trust (ACT) which runs the school, was instrumental in organising the contest.

"There was a lot of excitement among the students," says G P Gupta, ACT chairperson. They started collecting leaves days in advance of the February 25 contest. Says Manoj Kumar, 14, who came first in both competitions, "I collected 215 specimens, going right upto Rasoolgarh village, about three km away."

Says Rahul Gangal, a class 8 student, "I wanted to come first this time, so I started collecting my samples many days ago."


"I had gone to neighbouring villages and fields with my friends to pick specimens," says 12-year-old Sheelendra, son of the village headman. Adds Satyabir, who came second, "I asked my father to tell me about many of these plants."

Most of the students are aware of the uses of many plants. "This is not too surprising, as they are in constant contact with these plants," says Gupta. However, there were also those who learnt of new plants. "I didn't know there was a plant named Laila Majnu or that Mayurpankhi is used to cure cavities in cattle," said 14-year-old Savitri.

The specimens collected by the children "will be taken to IIM Ahmedabad or Delhi University to be analysed and classified according to their Latin names," explained Jain. With the information gathered, ACT plans to build a database.

However, Jain pointed out, "The real banks of knowledge are the children who don't go to school and who spend all their time in the fields." Jain and ACT plan to hold a competition for these children as well as a district-level contest for farmers. "Competitions like these will help spread knowledge," says Gupta.

Gupta is optimistic about the programmes: "The villagers know what is good for them. We let them decide what they want. This formula is bound to succeed."