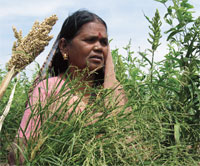 Millets, suddenly, are a focus area for the Union Ministry of Agriculture. Waking up to the nutritional benefits of these long-neglected cereals, Krishi Bhavan, the Delhi headquarters of the ministry, has in the past year been doing its best to help the small, marginal and tribal farmers who cultivate these hardy crops. But here lies the rub: its best is turning out to be a double-edged sword. By promoting the standard formula of modern farming techniques, traditional millet cultivation is being undermined and could jeopardise the future of its farmers, according to the millet lobby.

The ministry’s Initiative for Nutritional Security through Intensive Millets Promotion or INSIMP is a seemingly well-meaning scheme. With a `300-crore outlay in 2011-12, it covered 772,857 hectares (ha) (against a target of 671,300 ha) in 16 states and is demonstrating improved production and post-harvest techniques along with ways of adding value to the crops. Underpinning the programme is a cluster approach to ensure that the benefits of extension services reach the farmers in an integrated manner. So, compact areas have been chosen to maximise benefits: 1,000 ha per unit for sorghum (jowar) and pearl millet (bajra), 500 ha for finger millet (ragi) and 200 ha for small millets. The last consists of an assortment that comprises five other millets, from foxtail to barnyard, little, proso and kodo (see box).

These are highly variable and hardy, small-seeded cereal crops that have been traditionally used as foodgrain by farmers in the semi-arid regions of India where rainfall is minimal. According to official figures, they account for 47 percent of the total coarse cereals grown in the country—this includes maize and barley— but just eight per cent of the total cereal production (rice and wheat). INSIMP is a response to a nationwide campaign to bring millets back into the diet and in the public distribution system (PDS) by a federation of farmers, nutritionists and food activists known as the Millet Network of India (MINI). The network is campaigning to end the steep slide in the area under millets which has declined from 38.83 million ha in 1949-50 to about 18 million ha in 2010-11.

INSIMP was formulated at a brainstorming session held in November 2010 and the project was kicked off in kharif 2011 under the Rashtriya Krishi Vikas Yojana (RKVY) which funds state projects. And states appear to have taken enthusiastically to the millet initiative. As a result, an additional Rs 175 crore has been allocated for the current year to cover an additional area of 723,000 ha. Clearly, Krishi Bhavan is not stinting funds for the millets programme. 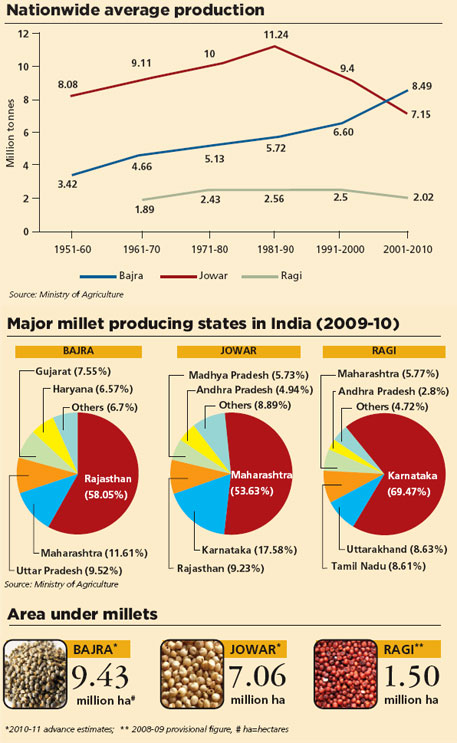 But controversy is also brewing. While INSIMP has some commendable features, it is also being viewed as a threat to the traditional cultivation of millets which has so far been free of chemicals—and dependence on the market for external inputs. But with farmers being weaned on chemical fertilisers and pesticides whose prices are galloping, there is justified concern that the millet initiative might led to indebtedness among the small and marginal farmers. The reason is the kit mentality of agriculture mandarins. Kits have become the hallmark of Krishi Bhavan schemes to increase production and productivity of all crops from maize to rice. Under INSIMP, states supply beneficiary farmers with free kits that include fertilisers, bio-fertilisers, micro-nutrients, seed treatment and plant protection chemicals worth up to Rs 3,000 per ha. In addition, there is an incentive of Rs 3,000 per quintal for hybrid seed production of pearl millet and Rs 1,000 per quintal (1 quintal=100 kg) for high-yielding varieties of other millets. The bulk (75 per cent) of this incentive goes to the farmer.

All these are reasons for disquiet, says MINI convener P V Satheesh, who heads Deccan Development Society, a non-profit that works with several thousand millet farmers in Andhra Pradesh’s Medak district. Satheesh warns the “only safe, inexpensive and farmer-controlled system will turn into an expensive and externally controlled system” (see ‘INSIMP will deepen agrarian crisis’,). But a spokesperson of the ministry told Down To Earth that “the contents of the kits are only illustrative. States in consultation with their agriculture universities or Indian Council of Agricultural Research (ICAR) institute are free to modify the contents of the kits as per local situation.” Andhra Pradesh and Rajasthan are doing so and Odisha, too, is following suit.

Rajasthan agriculture officer (plant protection) Mukesh Sharma says the state does not include weedicides as there is no problem of weeds in sorghum and pearl millet, and pesticides are being distributed on need basis. However, the continuing spike in fertiliser prices has made the kits extremely expensive, and Sharma says “it’s going to be tough to keep to the budget now”. This may have prompted Odisha to allow non-profit Living Farms to undertake INSIMP without the chemical component in the three districts of Koraput, Malkangiri and Rayagada. It is following the example of Deccan Development Society which is working in tandem with the Andhra Pradesh agriculture department to prove that millet farming can be done without any chemical inputs.

Some scientists endorse this approach. M V Channabyre Gowda, project coordinator (small millets), ICAR, says, “The use of pesticides and weedicides in small millets is negligible as these crops attract less pest and disease load. However, cultural (traditional) methods of weed control are practiced extensively. In fact, some of the high-yielding varieties are resistant to important diseases and hence use of chemicals for disease control is not warranted.” The main reason is that the less intensive agriculture practised by poor farmers in rainfed, tribal and hill areas makes the use of chemicals non-remunerative.

Similarly, C Tara Satyavathi, principal scientist, Indian Agriculture Research Institute (IARI), who specialises in pearl millet breeding, points out that insect pests are relatively less of a problem in most of the pearl millet growing areas in India because the cultural (traditional) control measures have been worked well to minimise the insect damage. “In some of our research experiments we spray pre-emergence herbicides to save labour and protect the crop from weeds and competition in early growth stages. Otherwise, there is no usage of herbicides or pesticides in general.” In which case, do farmers need pesticides and weedicides for growing pearl millet? Satyavathi’s answer is unequivocal. “They don’t need any pesticides at present. Weedicides also may not be required,” she declares.

J V Patil, director, Directorate of Sorghum Research, Hyderabad, say under the current subsistence farming conditions productivity levels are badly affected due to pest infestation, particularly during the kharif season. According to Patil, over 150 species of insects infest the sorghum crop at different stages of growth in the semi-arid tropics and cause an estimated loss of $1 billion annually, but he conceded that “in India just 32 per cent of the actual sorghum produce is lost due to insect pests. During rabi season it is much lower.”

But with the government setting out higher production and yields as the goal, the scientists’ views may well converge on the need for synthetic fertilisers and chemical pesticides.

For instance, Gowda, who is working at the University of Agricultural Sciences, Bengaluru, thinks that inorganic fertilisers may not be a critical need but a good dose of chemical weedicides may be necessary since yield losses from weeds could be as high as 35 to 55 per cent. “The cultural practice of weed control is labour-intensive and is increasingly difficult to practice,” says Gowda who believes that “where wet conditions prevail, weed control through chemicals may be a better alternative since it is less time consuming and less expensive.”

While INSIMP is bringing much-needed acreage under millets, it could also be setting the stage for a new farm crisis.