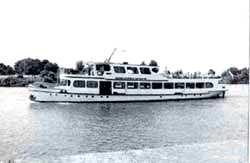 Friends of the Earth (FOE) Netherlands organised a Greenhouse Tour from September 3 to December 11. They travelled by boat through the many canals and rivers in the Netherlands, visiting 42 municipalities that have signed the Climate Alliance, a declaration in which municipalities have pledged to do all they can do to cut CO2 emission by half in their communities by AD 2010. The boat crew distributed information on the impact of the greenhouse effect and urged the municipalities they visited to make sure that their goal of reducing CO2 emission is achieved.
One of the main objectives of the Greenhouse Tour was the Greenhouse Debate. The debate was organised to support the municipalities to realise their goal, a difficult task in a society based on consumption and growth.

The main issue in the Greenhouse Debate was to discover or create ways to achieve the reduction, a tough job but technically possible and ecologically imperative. But it can be achieved on a permanent basis only through adequate political will. On 6 different evenings, representatives from municipalities, churches, trade unions, business and commercial interests, consumers, economists and members of parliament were asked to throw up ideas on how to reach the objective.

In fact, it would be strange if Warners did not believe this; besides being a legislator, he is also the chairperson of the Dutch branch of the Climate Alliance, a declaration jointly made by European municipalities in Germany, Austria and the Netherlands, and the Coica Indians of the Amazon in Brazil, to curb the greenhouse effect. The Coica Indians, on their part, pledged to strongly defend the rainforest. As the result of a campaign by FOE Netherlands, 127 out of the 660 Dutch municipalities (more than 1/3rd of the entire Dutch population) have signed the Climate Alliance over the past 2 years.

But it's easy to sign a declaration. Making drastic cutbacks in energy use, however, is a formidable task. Many municipalities were rather sombre after they had signed the Alliance. The measures and initiatives directed towards reducing energy use in the communities were slow in coming from the local legislatures. FOE Netherlands organised the Greenhouse Debate to stimulate the signatories. In municipal town halls, usually more a symbol of boring meetings than lively debates, local legislators thrashed it out with activists and experts.

It was apparent in the first meeting that the opportunities for communities to save energy are limitless. Warners effortlessly listed ideas, following which his municipalities had achieved positive results: energy-saving bulbs used in public lighting; using the surplus heat produced by local industries; monitoring energy use in the municipality; and forming "energy-saving teams" that help insulate houses.

The first debate also revealed the limited capability of local governments. The 50 per cent reduction in CO2 emission cannot be achieved by municipalities alone. They must have the full participation of business and industry, consumer organisations, trade unions, churches, scientists and the national government. From the national government, especially, a great deal is expected. Even though the political spectrum, from Social Democrats to the Left and liberal conservatives, cries itself hoarse on sustainable development, the first acts of the newly-elected Kok administration in the Netherlands has hardly been encouraging.


Says Warners, "Although Premier Kok is a party colleague (the Social Democrat party), but when I look at government policy, I can find little inspiration." The postponement of the ecotax, a tax on energy that the previous cabinet (which included the Social Democrats) had already placed on the agenda for this year, disappointed the partners of the Climate Alliance. The government has now promised to institute the tax by 1996, even if it is not adopted in the broader European policy.

The national government's plans to cut back on subsidies for research on renewable energy sources which could lead to the scrapping of half the ongoing research projects, is also viewed with apprehension by the Alliance partners. Municipalities and social organisations have already voiced their displeasure about these plans.

For Warners and others in the municipalities of the Climate Alliance, the situation is obvious. It is admittedly difficult to explain to voters the connection between driving less and setting the thermostat a degree lower, on the one hand, and the greenhouse effect and the store of raw materials, on the other. But "having the conviction that it really is possible" makes all the difference.