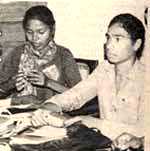 A GROUP of adivasis in Chattisgarh, Madhya Pradesh, are confident that they will no longer be cheated by the patwari. Shedding centuries of mathematical ignorance, the tribals have grasped the concepts of the weights and measures, with the help of origami -- traditionally associated with creating beautiful figures by folding paper.

Ravindra Keskar, an electronics engineer, has been using this novel tool in educationally-backward areas to help schoolchildren struggling with mathematics. "Origami is the embodiment of the essence of mathematics, which is discipline, creation and beauty," he says. "Paper-folding shows that mathematics has physical presence and excitement."

Keskar demonstrates the creation of circles, triangles, squares and cones from single sheets of paper that are not cut or glued. These models are used to explain concepts of volume and area. Complicated problems are taken up through origami for a more advanced class. The relationship between variables can also be explained through origami. Says Keskar, "By showing the relationship between variables such as land, water, forests and population, the concept of resource conservation can be explained."

Keskar realised the educative potential of the art in 1985, while working to psychologically rehabilitate child victims of the Bhopal gas disaster. Their eagerness persuaded him to carry the technique to schools all over the country. A scholarship from the National Council of Science and Technology Communication (NCSTC) in 1992 helped 46-year-old Keskar, who teaches electronics at the St Xavier Institute of Engineering, Bombay, to travel extensively. He has already held over 60 workshops on origami and trained about 2,000 people.

Keskar feels indebted to Sunder Rao, on whose book Mathematical Exercises in Paper Folding his knowledge is grounded. However, it was Keskar who transformed Rao's mathematical models into a practical, educational experience. At workshops organised in Raipur, Madhya Pradesh, by Disha -- a trust devoted to spreading education among tribals, backward classes and women -- participants were "made to understand the concept of measurement". Sixty-four year old Ahilyabai of Bharda village said that she learnt to measure the land that she has spent a lifetime tilling; Phekanbai of Maraud village and Sushila of Navagaon declared that they finally understood the difference between litres and kilograms.

Keskar, who was recently awarded NCSTC's 1994 national award for science popularisation, looks forward to setting up an institute to study ways of using origami productively.