In the barren wildness of the savannahs in Colombia, a visionary establishes an extraordinary community 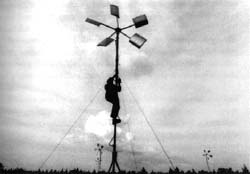 following the Arab oil embargo in 1973, when queues for petrol lengthened at petrol pumps all over usa and Europe, the Wall Street Journal carried a front-page feature on a South American community that had "solved" the energy crisis by devising equipments powered by renewable energy sources. The report was on Gaviotas, a village in Colombia.

Surrounded by lush pines, chirping birds, happy children, clean air, sparkling water and a well-fed, healthy community, Gaviotas is a model "to reinvent the world." Not merely because it represents thoughtful development and appropriate technology, but also because the present-day Gaviotas has been built on Colombia's barren and rain-leached savannahs.Paolo Lugari, the person whose endeavours gave a new lease of life to Gaviotas, calls it a topia , a Greek word meaning 'a place' as against utopia which implies a landscape that only exists in the imagination.

Piqued by media reports, a delegation from the United Nations Development Programme ( undp ) visited Gaviotas to study the technology that had been used to create the wonder. The work in Gaviotas had been carried out under the supervision of Jorge Zapp, the head of engineering in Bogota's Universidad de Los Andes. Lugari had been able to lure Zapp to Gaviotas along with a number of engineering students. The arrangement was that they would be taught their courses here and would be allowed to exercise their faculties to find technological solutions to the myriad problems of Gaviotas.

The marvels they had built included turbines that converted mild tropical breezes into energy, solar collectors that worked in the rain and highly efficient pumps that pulled water from deep aquifers. These pumps were hooked to children's see-saws: they pumped water out with the movement of children's play. Efficient, non-polluting, cheap engineering solutions. Later, Zapp was to work for more than a decade with the United Nations ( un ) under its programmes of designing technology for the developing nations.
The paradise everybody was raving about in the 1990s was a horrid, wet desert only 25 years ago. Lugari's inspiration and relentless zeal brought unprecedented prosperity and development in the region.

Born in 1944 and brought up in Popayan, a serene colonial city near the snowy Purace Volcano in southwestern Colombia, Lugari was schooled at home by his father, an Italian attorney, engineer and geographer. Lugari's father had visited Colombia as a young man and had found the tropics so beautiful and irresistible that he married a great-great-granddaughter of a 19th century Colombian President and settled down. His was an illustrious family, and the dinner guests included government ministers, intellectuals and church leaders. From an early age, Lugari's father used to encourage him to listen to the dinner table talk between the ministers, intellectuals and church leaders.

Brought up in an environment populated by extraordinary men and fed on original ideas, Lugari passed his university exams without attending classes. He won oratory competitions at the university and got a scholarship from the un Food and Agricultural Organisation to study development in the Far East.

Lugari returned home to Bogota in Colombia in 1965. It was the time of La Violencia. The country was engulfed in a deadly struggle between Leftist guerrillas and the establishment. People from cities were abandoning their homes to take refuge in far away places. Lugari, meanwhile, had begun to visit the sprawling llanos , a region inhabited by the Guahibo Indian community and several times bigger than a small sized European country. The Indians lived there in wretched conditions with only two bad choices: either live near the streams and endure the menace of malarial mosquitoes, or reside on the barren savannahs where the soil was useless and water had to be carried over long distances. Chronic malnutrition and parasitic infection had reduced their vitality. No doctor ever came their way, and there was no school for miles, the only one being several hours away run by nuns who frightened these people. Worse still, llanos was so far away from the main cities that it was beyond the government's reach. It was here that Gaviotas had to be built (see map: Green project).

By 1971, Lugari's persistent efforts and determination brought all kinds of soil scientists, technicians, engineers, musicians, artists and sundry kindred souls to the forsaken wildness. Together they set about creating paradise on earth. Instead of uprooting the Indians, the group of visionaries endeavoured to develop llanos .

But there were a number of hurdles posed by the rough terrain and unconventional lifestyle of the region. One comfort was free housing and food. But still too some lost heart. More so because there were no schools to educate their children. However, this was remedied and a school established for children from both the Gaviotan and Guahibo Indian families.

Homeless urchins from the streets of Bogota were also brought to Gaviotas and given education to change their lives and make them responsible citizens. Eventually they became part of the Gaviotas community. Thus, the seeds of a multi-racial, multicultural society was sown in Gaviotas.

In the initial years, a persistent headache was the complete incapability of the soil to produce cereals, vegetables and fruits. One day, Lugari was pleasantly surprised to find several kinds of fresh vegetables on the table in Gaviotas, a place which was sometimes described as "in the middle of nowhere." On enquiry he learnt that the vegetables were brought from a neighbouring farm run by missionaries. A team was immediately sent to investigate and learn the farming technology.

It came to light that the missionaries had been doing soil-less farming. They put nutrients in water and grew the vegetables in that water. This method of farming is called hydroponic farming. Gaviotans were quick to learn and use the technology with profit. A time came when Gaviotans began to sell their forest produce and technical gadgetry to outsiders. They began to run a big office at Bogota in Colombia which was some kind of an embassy, trade and cultural commissioners office rolled into one.


Within a decade or so of the visionary settlers' coming to the savannahs, "one of the most brutal environments imaginable" had become known as a model village worldwide. The savannah region was selected for Gaviotas precisely because it was one of the most unproductive lands anywhere on earth. Hundreds of crops were tested by the visitors but none of them survived in the highly acidic, leached tropical soils whose natural level of aluminium bordered on toxicity.

Then one day, a Venezuelan agronomist seated next to Lugari at a conference in Carcas told him to try pine seedings from Honduras, which Paolo did. The pine took to the soil and grew quickly into a lush green forest, maturing 10 years before botany textbooks said. This led to another remarkable development: under the cover of millions of Caribbean pines an ancient native rainforest was regenerated. The Gaviotans were against felling trees, but to keep the forest healthy, periodic thinning was essential. Now the question was what to do with the felled trees? Well, quite a lot of things. In fact, it had the potential to become an important part of the Gaviotan economy.

Until the Gaviotans introduced a forest produce industry, Colombia had been importing millions of dollars' worth of resins annually for paint, varnishes, turpentine, cosmetics, perfume, medicines and rosins for violin bows. Gaviotas was not only to step into this area but start a complete musical instrument factory of its own. Over a period of time, the ruined ecology of the rainforest was also revived. With all technology developed along non-polluting lines, environment was restored and protected rather than exploited. The Indian community was greatly benefitted by the new farming techniques, clean water and education and they emerged from their insecure lifestyle to live comfortably. The extraordinary development in Gaviotas by Lugari and his team was perhaps best appreciated by Aurelio Peccei, founder of the Club of Rome, who had remarked on his visit to Gaviotas in 1984: "This is what the world needs."

Written by Zeyaul Haque / The story is based on Alan Weisman's book GAVIOTAS: A VILLAGE TO REINVENT THE WORLD. Published by: Chelsea Green Publishing Company, England. Price: US$ 14.95.227pp