A conference for the common good the mainstream media ignored 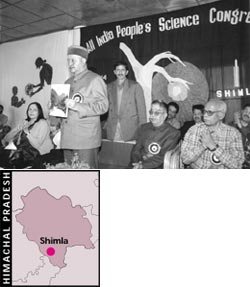 a piece of inspiring information was in store for the 1,000 delegates who assembled in Shimla during the second week of October 2003 to be a part of the latest biennial conference of the All India People's Science Network (aipsn). They came to know that a recent conclave of the sangh parivar had termed this umbrella organisation of 40-odd people's science movements (psms) from across the country as an emerging threat. The psms were happy to hear this. "It shows we are moving ahead in the right direction," said a prominent aipsn activist.

Constituted about 16 years ago as a loose confederation of like-minded institutes, aipsn has been at the forefront of harnessing the power of science and technology for common good. Its three lakh volunteers (including scientists, teachers, writers, farmers and students) have brought about a remarkable difference in as many as 300 districts of the country. Their most notable nationwide accomplishment was the crusade against illiteracy, which led to a 16 per cent increase in the literacy rate during the last decade.

As a precursor to the conference, a month-long campaign was organised on the key themes of peace, unity and sovereignty. It included programmes by over 40 kala jatha troupes that travelled across the country for over three weeks and addressed more than five million people. The Shimla meet, officially called the 10th All India People's Science Congress, was a platform to take stock of the work done by psms in the last two years and plan the future. Participatory governance experiments in different parts of the country, and the formation of a large number of new self help groups (shgs), were said to be the main outcomes of the work done by psms. Two good example of new shgs are: malar, a women's organisation which emerged as a role model for economic empowerment of women in Kanyakumari district of Tamil Nadu; and an unique tank irrigation association that helped fight ingression of seawater into farms in Pondicherry.

In his inaugural address to the Congress, Virbhadra Singh, chief minister of Himachal Pradesh, stressed on the need to inculcate a scientific temper among people and fight obscurantist values. Rajaraman, an internationally reputed nuclear physicist, called for the immediate cessation of further production and testing of nuclear weapons to 'denuclearise' the world.

The conference, largely ignored by the mainstream media, focussed on six broad themes: science and reason, globalisation and self-reliance, natural resource management, women empowerment, peace and security and social security (health and education). Plenary sessions were held on each issue. Every session was divided into two sub-congresses, which were further subdivided into 10 workshops held every day.

Apart from the plenary sessions, there were about 30 parallel workshops on different sub-themes such as the agrarian crisis, alternative rural technology models, post-harvest technologies, right to food and impact of violence on women. A number of case studies were presented. For instance, D B Sarojini of the Pune-based Medicos Friends Circle (mfc) narrated two incidents to show how well-meant policies could be gender insensitive. mfc's studies in Madhya Pradesh documented how an otherwise harmless norm (the not 'more' than 'two' children mandate) included in the Panchayati Raj act has become a bane for women. For instance, a gram sarpanch disowned his wife on charges of adultery when she conceived for the third time; in another case, a woman sarpanch was removed from her post after she delivered her third child. When the child died three months later, people with vested interests accused her of killing the infant in order to come back to power.

The attendees also deliberated on several other issues, including the distinctive effect of globalisation on the livelihood of people, particularly farmers. It was noted that the greatest threats to peace and security arise from "unilateral military adventures", such as the one that the us-uk nexus recently undertook in Iraq. The breakdown of the Cancun meet, it was felt, gave the opportunity to further unite people against the predatory attacks of the rich nations. It was also observed that 'health for all' is still a distant dream. Moreover, mere reliance on 'high technology' would not satisfy the needs of all. Some of the participants urged for the development of self-reliant technological alternatives appropriate to Indian conditions. In the end, the Congress called upon all its units to actively participate in the forthcoming World Social Forum, which has a unique slogan -- "another world is possible".