Cry of a river

A little known river in UP is struggling for survival. Untreated effluent, delayed action to blame

Cry of a river 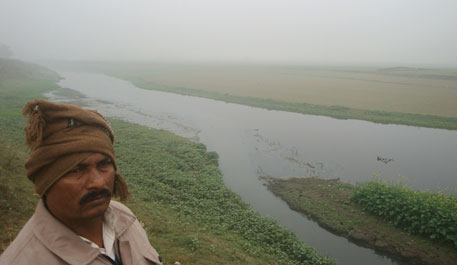 Indra Pal Singh fondly recalls drinking sweet water of the river Ami as a child. Elders of the village where Pal Singh grew up say the river gets it name from aam (mango) or amrit (nectar). Today, Pal Singh, pradhan of Adilapar village in Uttar Pradesh’s Gorakhpur district, says the 136 km river has become a nuisance. A drain that carries untreated industrial effluent from the Gorakhpur Industrial Development Area (GIDA) has reduced it to a filthy water body. Residents of more than 100 habitations downstream of the drain often complain of colds, mystery fevers, nausea and high blood pressure. They find it hard to breathe at night as the stench from the drain rises with the increase in the volume of the wastewater. The residents say the effluent level rises by half a metre at sunset.

Built on the lines of NOIDA in the late 1980s, GIDA was set up by the then chief minister Veer Bahadur Singh. It comprises 158 units, including paper mills and textile manufacturers, which discharge some 45 million litres of untreated effluent into the drain every day. GIDA was formed with the commitment that a common effluent treatment plant (CETP) will be set up by 1989 but it has not happened. A committee was constituted in 2009 to look into the matter; it has met just once. Officials insist that work on the facility is in progress.

Untreated municipal waste from two nearby towns is also discharged into the river. It is said that the towns’ sewage is harming the river’s health. “The towns account for seven million litres of sewage each day and this pollution load is within the assimilating capacity of the Ami,” says Govind Pandey, professor at Madan Mohan engineering college in Gorakhpur, blaming industry for the river’s health.

A campaign is born

Before GIDA was set up, thousands of people living in the 522 sq km catchment area of the river, mostly fishermen and farmers, were reaping the benefits of the Ami. Rice is the major crop of the region, while wheat and barley are also sown. But due to the pollution the productivity has reduced by a third. Freshwater fish like boi and rohu, which once used to be bountiful, are no longer found. The negligence on the part of the authorities has affected the residents. “Several thousand fishermen are now either doing wage labour in urban areas or selling liquor. Some have even resorted to crime,” says Pal Singh.

The residents started observing changes in the river water quality in the early 1990s. A pradhan of a village downstream organised a meet on World Environment Day in 1994, and the movement to save the Ami kicked off.

“I told the residents that GIDA was discharging untreated sewage into the Ami and it did not have a CETP,” says Pandey. In 1994, Pandey asked the CEO of GIDA, his senior from college, to conduct an environment impact assessment in the area and chalk out an environmental management plan. “He agreed. But due to lack of funds the plan did not materialise. It has been more than 15 years,” says Pandey.

Pandey gave impetus to the movement in 2009 when he called all those living on the banks to symbolically throw a fistful of alum, a coagulant, and bleaching powder into the river on Maker Sakranti, an annual Hindu festival, in January. The event made the front page of local dailies.

Vishwa Vijay Singh, former student union leader of a Gorakhpur college, was appointed to take the campaign forward. “Vijay Singh has been very active in organising rallies. He even undertook a padyatra for almost the entire course of the river,” says Pandey. When Congress general secretary Digvijay Singh visited Gorakhpur in 2010, Vijay requested him for help. The then environment minister Jairam Ramesh, when apprised of the matter, sent a letter to Chief Minister Mayawati and directed the Central Pollution Control Board (CPCB) to probe the matter in April 2011.

Impressed by his work on their first meeting in July 2011, All India Congress Committee general secretary Rahul Gandhi picked Vijay Singh as the party candidate to fight the polls from Sahjanwa constituency in Gorakhpur.

An incident involving officials of the Uttar Pradesh State Pollution Control Board (UPPCB) and the residents also grabbed headlines. The people are aware that the industries are not complying with the conditions mentioned in the no-objection certificate. So in April when three UPPCB officers were testing the river water, the residents blackened officers’ faces and made them wear saris and paraded them through the villages. They were let off only when the district magistrate intervened.

UPPCB says shutting down units is not the permanent solution. It issued a show-cause notice to the units. The units continued to operate.

In April 2011, a three-member CPCB team was deputed to monitor the quality of the river and the drain. Six polluting industries were to be inspected.

CPCB conducted the first test of the river water near a village that lies near a point where no mixing of effluents takes place. According to CPCB’s report, the water at the point is of the best water quality classification (Class A). The coliform count, however, indicates some sewage discharge. The next sample was tested before the effluent-carrying drain falls in the river. It was found to be unsuitable for bathing (Class D) as industries near the towns were discharging untreated waste. CPCB also tested at a point downstream of the drain. The water quality at that point is below even the worst classification (Class E), according to the report submitted to the environment ministry in June 2011 (see infographic: ‘Water quality at various points of river Ami’). 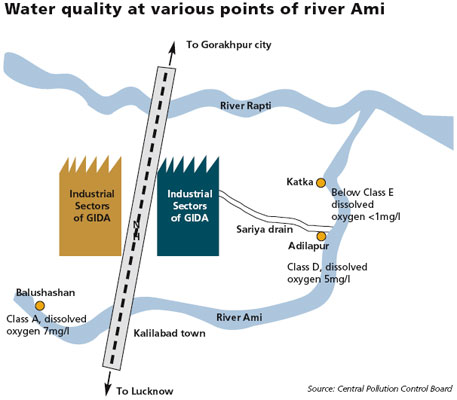 The quality of the drain was, however, found to be within the pollution parameters. The catch is: during sampling the major polluting industries were not operating. “We told CPCB not to inform the industries about the inspection,” says Vijay Singh. But while inspection was on, the units conveniently suspended their operations for some time, he adds. One plant was shut due to maintenance, another for want of electrical connection, two reported labour problems and two other cited lack of raw material. Yet, CPCB found some discharge, suggesting that work at a paper mill was halted recently. CPCB found this effluent to be well above the permissible limits. The board ordered a unit to dismantle its 1,400-metre-long illegal underground drain. The unit is yet to follow the direction.

Gorakhpur mayor Anju Choudrey says the river today is more a problem than an asset. “The development authority gives permission without checking whether the industry has followed the rules,” she adds.

In the first quarter of the new year, Jayanthi Natarajan, the present environment minister, is expected to visit the area. All hopes are pinned on her.