Chandrababu Naidu ia known more for his obsession with technology and computers. Little is known about his watershed mission 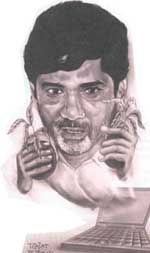 Chandrababu Naidu ia known more for his obsession with technology and computers. Little is known about his watershed mission Dream politician. Going by common sense, that seems like a contra- diction in terms. But recently, N Chandrababu Naidu, chief minister (CM) of Andhra Pradesh, has been dubbed just that: a near-perfect model of one such "dream politician". The World Link magazine, published from Davos in Switzerland by the World Economic Forum, recently included him in its "dream cabinet" of political leaders.

Naidu, with 48 Andhra summers behind him, is better known for his efficiency in management and not his rural development programmes. "The CM has systematically planned his programmes and the success of his ideas are gradually reflecting in people's increasing participation in the development process," says Randeep Sudan, special secretary to CM.

Extremely techno-savvy and most comfortable clicking away at his laptop computer, he keeps a tab on the latest developments in the state. Naidu's obsession with technology and efficiency has earned him the moniker of Andhra Pradesh's CEO, He has been pushing hard to make the state capital Hyderabad India's answer to USA's Silicon Valley, meeting Bill Gates, CEO, Microsoft Inc, and persuading him to set up a research and development facility.

M S Shankar, a senior journalist and political analyst in Hyderabad, says, "Naidu has gradually shifted focus from urban development to rural uplift after an internal party survey of the Telegu Desam Party (TDP). The survey results showed that the party would get only 50-60 seats out of 294 in the coming assembly elections if it continues with its urban-oriented policy. The main vote bank for TDP is in rural areas. However, Sudan denies this, stressing that Naidu has been focusing on rural development ever since he became the CM.

At present, some of the CM's central concerns are rural development and environment protection. "Its our responsibility to give our future generations a better environment," he says. Kallol Biswas, district forest officer, Anantapur, says: "I have not known a chief minister who takes so much interest in forest conservation activities. He himself reviews the forest activities and holds regular meetings with forest officials."

That is Naidu today. A quarter of a century ago, Naidu completed his post-graduation n economics from the Sri Venkateswara University, Tirupati, Andhra Pradesh, and became politically active. In 1978, he was elected to the Andhra Pradesh Legislative Assembly from Chandragiri constituency in Chittoor district. As the general secretary of the TDP in 1985, Naidu was instrumental in strengthening the party's organisation from the grassroots level, where the TDP has its base. In 1989 and 1994, Naidu was elected to the state legislature from the Kuppam constituency of Chittoor district. On September 1, 1995, he was elected as the state's chief minister. After coming to power, he introduced several developmental programmes, including the Janmabhoomi programme and other projects such as Joint Forest Management and watershed development. "I want to empower people and give them better governance," the cm explains. However, some people express dissatisfaction with the implementation of the programmes. "Naidu is corrupting the very idea of participatory watershed development programmes. Politicians and bureaucrats have formed NGOs just to grab the projects with an aim to mint money. Transparency in most of the watershed projects is missing," says P V Satheesh, director, Deccan Development Society, Hyderabad. Further, D L Ravindra, Congress MLA and former minister, says that the way Naidu is launching programmes, it is not possible to fulfill their objectives. Most of Naidu's programmes have not taken off due to a fund crunch, he says.

BASIS OF RATING: There is more to Chandrababu Naidu, the "CEO" of Andhra Pradesh Inc, than just information technology, say readers. Among the 335 respondents, he was the choice of 21 percent. But only half of the environmentalists felt he was working towards sustainable development Two-thirds of the respondents felt he had promoted the civil society. They gave examples of the Janmabhoomi, Joint Formt Management and watershed management programmes to justify this

"My vision of Andhra Pradesh is one where poverty is totally eradicated; where every man, woman and child has access to not just the basic minimum needs but to all the opportunities for leading a happy and fulfilling life; a knowledgeable and learning society built on the values of hard work," says Chandrababu Naidu, the chief minister (CM) of Andhra Pradesh. To make good this vision, people have to be involved in the development process. "My biggest priority is rural development," he says.

He launched the Janmabhoomi, watershed management and Joint Forest Management (JFM) programmes to bring about sustainable development in the state. He has also initiated several self-help groups such as the Water Users' Association to involve farmers in the management of irrigation systems, Development of Women and Children in Rural Areas (DWCRA) groups, and village education and health committees. The Janmabhoomi, JFM and DWCRA programmes have been successful. According to Randeep Sudan, special secretary to CM, "Environment is one of the focal points for the government's programmes. The state government in the Vision 2020 has identified environment as a priority."


The Janmabhoomi programme was launched in May 1997. In this, people identify their problems in gram sabhas, which are conducted by the nodal officers of the particular region, and send project proposals to the government. Gram sabhas are conducted in areas with a population of more than 200 people.

The five core areas of Janmabhoomi are community work, primary education, primary health, family welfare and environmental protection. Work is under two categories: earth work and non-earth work. The former includes building of roads, canals and drains. The government and the public contribute equally for every project. Non-earth work includes plantation of trees, meeting educational, health, fodder and drinking water needs. Here, the public pays 30 per cent of the cost of the project in the form of shramdan (voluntary labour) and the government pays the rest. All the projects are executed within a stipulated time period.

In 1997-98, the government planted nearly 46 million trees under the Clean and Green Campaign, which is a part of the Janmabhoomi programme. It has sanctioned 66,883 proposals for community development, valued at about Rs 941.17 crore. On the education front, 631,000 children have been enrolled in schools. In the same period, nearly 811,000 children were immunised and 2,472,000 patients treated in 91,648 special health camps. "The confidence levels of people have risen and their attitude towards government-run development programmes has changed," says Murali Dhardu, professor at the department of rural development, S K University, Anantapur. The CM closely monitors day-to-day affairs of the Janmabhoomi programme. Yet people in rural areas have complaints. "We are so disillusioned with the implementation of the Janmabhoomi programme that we have decided not to allow any nodal officer to come to our village," says H Annapurnama, a villager from Hottebetta in Anantapur. Some of the projects which were identified in the eighth round of the programme have not been taken up till today, she says.


Watershed programmes are not new to villages of Andhra Pradesh. But the Naidu government's plan to focus extensively on watershed development has given many drought-prone districts such as Mehboobnagar and Anantapur the much-needed boost to work towards meeting water requirements.

The state government has made a four-year (1995-96 to 1998-99) watershed development plan. It has already invested more than Rs 3,000 crore in 4,239 watershed projects covering 2.1 million hectares (ha) of land. Naidu has sought help from Anna Hazare, the person behind Ralegan Siddhi's success. "Some of the watershed projects based on Anna's methods have helped farmers cultivate two crops a year," says R Rajamani, a former bureaucrat.

Groundwater levels in several villages have also gone up. "Earlier, water was available only at a depth of 18-20 metres. Now, we get it at six metres," says Harinath Reddy of village Vanjuvanka in Anantapur. Naidu has sorted out financial problems. Money is directly given to watershed committees.


The joint Forest Management programme was launched in Andhra Pradesh nearly five years ago. In 1995, when Naidu took over as chief minister, there were merely 200 vana samrakshana sarnithis (VSS). Today, the number has gone up to 6,271 with a total of 1.4 million hectares (ha) of forest land under the programme.

Government has entrusted the villagers with the task of regenerating and protecting the forests. The entire timber and bamboo produce is given to VSS members. According to P Raghuveer, deputy conservator of forests, Andhra Pradesh Forestry Project, Hyderabad, "The government has allocated Its 360 crore for the VSS in the current financial year."

vss programmes in the districts of Anantapur, Visakhapatnam, Chittoor and Mehboobnagar have shown remarkable results. In Anantapur, there are 95 VSS, managing 22,319 ha of forest area. Within two years of adopting the programme, the availability of fuel and fodder has also increased and has provided employment to many poor people.

"Villagers feel responsible for protecting the forest," says Kallol Biswas, Anantapur forest officer. This could be because "for the first time, we have got a chance to get 100 per cent profits from protecting the forests", says Dase Goud from Hottebetta, Anantapur, who has been instrumental in the formation of a VSS in his village.