If no action is taken soon, a major ecological disaster is waiting to strike Panipat 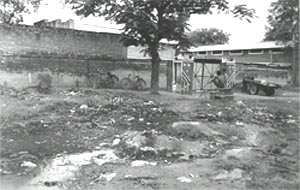 even as you enter Panipat, a small industrial town in Haryana, you are struck by a feeling that something is terribly wrong. Then, as you look around, the sight that meets your eyes is all too familiar. On the very outskirts of the city, along national highway No 1, flows an open drain carrying black, foul-smelling wastewater. Similar drains can be found all over the town. Most of the polluting wastewater is from the 500-odd dyeing and processing units that have mushroomed in the city. It is no wonder that the incidence of diseases like tuberculosis and gastrointestinal problems has risen alarmingly over the years. Today, the town with a population of around 500,000 is at grave risk (see box : Waiting for disaster ).

Pollution in Panipat has risen to such levels that the state government has finally decided to relocate dyeing and processing units, which comprise the most polluting industries of the town. On the basis of a preliminary survey conducted by the Haryana Pollution Control Board's ( hpcb ) regional office at Panipat, a report has been prepared and forwarded to the head office at Chandigarh. The report will be sent to the ministry of environment and forest. A hpcb official said that a high-level meeting to decide the future course of action is to be held soon.

Official sources said the relocation project will be undertaken with soft loans provided by the Japanese government. But first, a survey will be conducted to identify the polluting units, especially small units operating in residential areas. A specific area will then be identified for relocation. The government will provide land at subsidised rates and set up a common effluent treatment plant ( cetp ). "The main purpose of relocation is to shift such units from small colonies to a site where effluents can be treated," says O P Dahiya, hpcb' s regional officer.

However, others have expressed doubts about the relocation plan. G S Bajaj, general secretary, Industrial Area Manufacturers Association, Panipat says: "The government just makes false claims and does nothing. Many such proposals have not worked in the past."

Some of the areas, where around 90 per cent of the polluting dyeing and processing units are located, include Tehsail camp, Subhash nagar, Ram nagar, Sunoli road, Jattal road, Sector 29, Sector 25 and the old industrial area. In the Tehsail camp area there are many unauthorised residential colonies from where these units operate. The problem stems from the limited scale of operations, which make it impossible for these units to install effluent treatment plants ( etp s).

"Much of the effluents from these units either flow into open drains or on to vacant land," says B S Malik, a journalist with The Hindustan Times . Dahiya claims that since many of the dyeing and processing units are located in bylanes and have high walls, it is not easy to check on their activities. "The wastewater never reaches the end of the drains. The water percolates into the ground much before that," says Malik.

In late 1999, there were moves to install a cetp to reduce water pollution in Sector 29. Part of the funds for setting up the equipment were to come from a government grant, while the remaining cost was to be shared by the industrialists. "But due to a lack of interest and initiative from both sides, the plan did not get off the ground," says Malik.

Despite the profusion of dyeing and processing units in Panipat, only 60-70 etps have been installed so far and no cetp s. Contrary to this Dahiya claims that of the total effluents discharged in Panipat, around 90 per cent is treated. Malik counters this saying: "Almost all the effluents in Panipat go out untreated or with very little treatment."

The owners have no fear of surprise raids. "Whenever there is to be a raid by the vigilance department, the local pollution board official informs us a day in advance," says another industrialist who wished to remain anonymous. Those who have an etp operate it and those who don't just shut down the factory for a day, he adds.

Most industrialists let the effluents flow into sewers without any treatment. "Sewage pipes provided by the government are only 10 cm in diameter, so they get choked. As a result most of the effluents flow on to the road or into vacant areas," says Bajaj.

Many industrialists pointed out that some hpcb officials are corrupt and the board's rules only encouraged malpractices. "The hpcb has approved of a number of companies dealing in etp s. If we buy etp s from any other source the hpcb officials find fault with it and reject it -- even if it is a better product," says an industrialist. Also if the samples are tested by laboratories not approved by hpcb, then the results of such tests are rejected, he adds. hpcb officials also provide fake results for tests conducted by them, he adds.

On the other hand, hpcb officials claim that they monitor pollution closely. "We do regular testing and monitoring. During the last two years or so, we have closed down around 10-12 units for not conforming to the pcb norms and not installing etp s," says Dahiya. He claims that sewage treatment plants ( stp s) can treat most of the chemical wastes from these units, while the rest is treated naturally through biological processes. "This is not the case. Most stp s and cetp s in India consist of biological treatment processes which mainly reduce the biological oxygen demand, chemical oxygen demand and suspended solids. Small amounts of the chemical wastes are also removed but not all of them," says Chandrabhushan Singh, coordinator, Green Rating Project at the Centre for Science and Environment, New Delhi. Dahiya says that even if they find mercury there is nothing they can do about it as it cannot be treated. "This is incorrect and reveals the ignorance of the hpcb official. Mercury is being recycled for use the worldover. If it can't be removed then it is converted into sludge and kept in secured landfills," says Singh.

Most experts say that the relocation of industries may not solve all the problems related to pollution? " cetp s are not equipped to treat the chemical effluents from dyeing units. Therefore, even relocation and installation of cetp s cannot address the problem," says Singh. So what needs to be done? The hpcb should think in terms of process modification which can lead to a reduction in chemical effluents. If it cannot be done, these industries should be closed down, he adds.