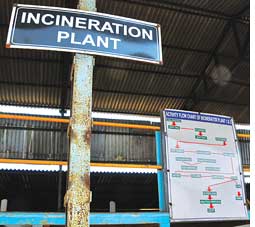 Disposal facilities are not the final solution, but are good business as long as subsidized

India generates 8.14 million tonnes of hazardous industrial waste in a year, according to cpcb. Of this, at least 350,000 tonnes have to be incinerated. However, the capacity of the tsdfs in the country to incinerate waste is much less 126,900 tonnes a year.

According to the Hazardous Waste Management Rules, 1989, it is mandatory that industries send their hazardous waste to a treatment facility. India has 25 operating tsdfs and not all of them have incinerators.

Emerging waste management companies see big business opportunity in this gap, especially since the Union Environment and Forests Ministry initiated a scheme in March 2007 to provide financial assistance of up to Rs 2 crore (equal to the state grant of Rs 2 crore) for setting up a tsdf through public-private partnership. This is besides the grants by industry associations and subsidized land by the states. Work on nine tsdfs has begun since 2007.

The potential size of the hazardous waste management business is between Rs 900 crore and Rs 2,300 crore a year (see Expensive treatment).

gepil runs tsdfs in Surat, Haryana, Dadra and Nagar Haveli and Alang, and is a division of textile giant Luthra Group. "We are the first in India to have a common incinerator, in 2001," said Priyesh Bhatti, chief executive officer of gepil. The group is definitely eager to invest in waste management. It is constructing an incinerator at its proposed hub of textile industries in Palsana, Gujarat Eco-textile Park, which has got a Rs 40-crore grant from the Union commerce ministry, though the park is not supposed to generate hazardous waste.

"They have got a no-objection certificate (from gpcb) for setting up only non-polluting industries, so where is the need for an incinerator? I have filed a case in the National Environment Appellate Authority against this," said M S H Sheikh, president of Brackish Water Research Centre, a non-profit in Surat.

Bhatti said, "I can set up an incinerator anywhere and it can receive waste from anywhere in the state. This incinerator will be novel in the sense it will recover heat to generate power. I will supply power to textile industries."

upl Environmental Engineers Ltd, with a turnover of Rs 100 crore, is the environmental services subsidiary of the United Phosphorus Ltd. It has two tsdfs beil in Ankleshwar and one in Ernakulam in Kerala.

"I haven't heard of any tsdf operator incurring losses. They decide the rates for disposal on their own and many times factories that send waste to their tsdf are shareholders," said Shyam R Asolekar, head of the Centre for Environmental Science and Engineering at iit Bombay.

According to an industry insider tsdf prices have at least a 15 per cent profit margin. Maintenance is the biggest operating (22 per cent) cost.

Environmentalists say waste disposal, if properly done, is very expensive. "In industrialized countries incineration costs at least three times of what they are charging in India because they use costly pollution control equipment. This is also the reason most northern countries have gotten rid of their polluting industries by outsourcing it to poorer countries," said Nityanand Jayaraman of sipcot Area Community Environmental Monitors, a Chennai-based organization.


Lack of fear of the law is evident in the manner tsdfs operate in India. gepil's landfill in Surat is located within metres of a creek, which receives a lot of water during high tide, leading to run-off from the landfill. "About 25 buffaloes died eight months ago after drinking water from Gabheni creek," said Rameshwar Vistar of Gabheni village, where the tsdf is located. "In March last year we woke up to noxious emissions in the middle of the night. We were forced to run out of our homes. We lodged a complaint with the police but they still burn waste between 2 am and 5 am."

This is how the company replied to a gpcb notice in 2007 on noxious fumes "For most people, the process of smelling gives little information concerning the ingredients of a substance. It only offers information related to the emotional impact."

"They get waste from industries at a very high price (Rs 12,000 per tonne), which they either dump in the creek or sell to brick manufacturers as cheap fuel," alleged Hasmukhbhai, sarpanch of Gabheni.

gpcb served the facility a notice in June 2007, which said that barrels storing incinerable waste were found leaking, while "strong pesticide odour with hazy climate was experienced" in one of the godowns. The notice also mentioned a report by cpcb saying, "The secondary chamber (of the incinerator) was not found in operation. Though there was no feeding of liquid waste and fuel in the secondary chamber, the sensor was showing false temperature values...Operators were observed to be writing wrong values, particularly temperature, at the secondary chamber, though it was not in operation."

A gpcb official asking not to be named said these things had been reported to the head office, but to no avail.

In Pithampur in Dhar district of Madhya Pradesh, where Ramky runs a tsdf called MP Waste Management Project, the situation is no different. In June last year, 40 tonnes of hazardous waste from the Union Carbide factory in Bhopal was dumped there. "The transportation was done in the middle of the night without the knowledge of villagers there. There is no mention of what was done with the sludge resulting from treating the waste with lime," said Rachna Dhingra of the International Campaign for Justice in Bhopal. The sludge has to be treated in an effluent treatment plant.

As per the documents obtained under rti by Dhingra, the transporter who carried the waste from Bhopal to Pithampur was from Ankleshwar. The transporter was not authorized under the hazardous waste rules, but was still granted permission by the Madhya Pradesh pollution control board to transport waste at Rs 42 lakh for three trucks for a distance of just 300 km.

According to cpcb, the incinerator at the Pithampur site will take another six months to become operational, but the facility is already buying incinerable waste from industries and stocking it in Pithampur and Udaipur in Rajasthan. The Udaipur facility does not have an incinerator either. "The Pithampur facility is within 500 metres of village Tarapur, which goes against the criteria for a landfill site. Through an rti, we found that their piezometer, used for measuring impurities in groundwater, was not working," said Ajay Dubey, founder and secretary of Prayatan Environment Action Group in Bhopal.

Mumbai Waste Management Ltd in Taloja industrial area of Maharashtra, also run by Ramky, boasts the largest hazardous waste incinerator in India built at a cost of Rs 18 crore. It has 2,516 industries as members. But big is not necessarily better. sipcot Area Community Environmental Monitors collected air samples 50 metres from the facility in 2005 and found two chemicals above limits set by the US Environment Protection Agency; one, Methylene Chloride, is a known carcinogen. This when Ramky was leased 40 hectares, worth over Rs 2 crore, at Rs 4 lakh for setting up the tsdf, and charges Rs 12,000-22,000 per tonne of incinerable waste.

In Delhi's Najafgarh zone, a tsdf was cancelled after people filed a petition in the Supreme Court. "The proposed site was less than 500 metres from our village and the Najafgarh drain. A cattle shed is just next to the land. Any industry of Delhi is at least 40 km away," said Dayachand, a retired school teacher in Ghumen Hera village.

In Gummidipoondi village of Tamil Nadu's Thiruvallur district, Ramky has been operating a tsdf for six months despite protests. "The panchayat and industries association passed a resolution that they do not want the facility. But they used police force and now we are made to suffer the bad odour day and night," said T Sudhakar, a resident of nearby Papankuppam village.

"We even filed a case in the Supreme Court in April 2007 as part of the ongoing hazardous waste case, but before it came up for hearing, they had constructed the facility," said Jayaraman.

Some industry associations run their own tsdfs for which land is usually given at subsidized rates, like in Vatva industrial area in Ahmedabad and Nandesari in Vadodara. The Green Environment Services Cooperative Society Ltd in Vatva runs both the common effluent treatment plant (cetp) and the tsdf for the area. Despite the infrastructure, the effluent goes into the Sabarmati river via a stream near the cetp. "Industries do not complain because if they ask for compliance they will be forced to pay more for proper treatment," said a former industry association president of Vatva.

Landfills at Taloja, Vatva, Gabheni and Ankleshwar have come up in the middle of agricultural fields. These will be rendered useless once they are filled.

People don't want tsdfs in their backyard. They are expensive. And they are not a complete solution to waste disposal. According to a presentation by cpcb, "On the one hand, the energy content of the hazardous waste is wasted, and on the other, extra energy is required for incineration. Volume reduction is generally not 100 per cent and the ash generated is again hazardous waste and requires secured landfill for disposal."

"Even with all the subsidies and political support, the fact remains that managing a landfill and an incinerator is dirty and dangerous work," said Ramesh Suri, regional geocycle project head of Holcim Services (South Asia) Ltd, which is incinerating hazardous waste in its cement kilns on a trial basis. "How long can the government go on giving subsidy?"