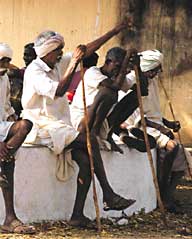 unable to identify the culprit (S litura) that appears only at night, ap farmers resorted to all kinds of pesticides in quantities that astound even the pesticide dealers, who reaped a rich harvest with sales spiralling through the roof. Little did the farmers realise that the pest had developed complete resistance to these and most other pesticides used in the region.

Methomyl is a highly-poisonous pesticide and dealers sold 20,000 litres of it in Warangal. The quality of the pesticide available to the farmers can be assessed by the story of Komala Mallaiah, a farmer from village Pedda-pur, who survived after drinking it. There are as many as 13,000 retailers in district Warangal itself, selling pesticides manufactured by some 93 com-panies. "We do not recommend these pesticides as they are highly toxic. Moreover, they are not required most of the time.But farmers do not listen to us," says Jalapati Rao, agricultural scientist working at the Agriculture Research Station in Warangal.

The pesticide lobby is very strong in the state and one the chief promoters of the switch from sustainable, low-yielding traditional cultivars to cash crops like cotton, which are susceptible to a host of pests and rely highly on pesticides. When confronted with the question of spurious and sub-standard pesticides, Ventakeswarlu, a pesticide dealer in Warangal, is quick to defend the industry, laying the blame squarely on the farmers. "We do not sell anything spurious. The farmers do not follow the instructions and mix the chemicals, destroying the chemical structure of the formulation and rendering them ineffective," he says. "The farmers here think they are the greatest scientists. They start with synthetic pyrethroid, when the mildest of pesticides can do the trick," he adds. "Only illiterate farmers are facing damage. Progressive farmers are getting good yields," says Venkateswar Reddy, a sales officer of Newchemi, a pesticides company.

The New Delhi-based Pesticide Association of India (pai) also washes its hands off quality control and the sale of spurious pesticides. "The problem of the quality of pesticides rests with the state governments. It is for them to implement their regulations," says F C Mathur, executive director, pai. Clearly, the government has failed to educate the farmers about appro-priate application of pesticides, nor has it been able to check the sale of spurious pesticides.


ap is the producer of Suvin - one of the finest cotton varieties. Before 1970, the state produced only 200,000 bales of cotton each year. The Nagarjunasagar dam project in the 1970s changed all that. Area under cotton cultivation and production shot up. Cotton is cultivated in the districts of Guntur, Adilabad, Kurnool and Prakasam, spreading to Warangal and Nellore in the last few years.

Farmers have shifted from self-sufficient paddy-pulses-vegetable crop rotation to the more profitable cotton cultivation under government patronage, starting a pesticide treadmill. On an average, a farmer cultivating cotton gains Rs 2,835-4,050 per hectare (ha) - impossible with other crops. In Warangal district, for instance, village after village shifted over to cotton, but soon began to face pest attacks. "In Warangal, S litura is like a voracious army, eating just any crop it can find, even plants of coriander," says Tewari.

Supported by good rains and favourable weather, harvests have been plentiful for the last several years, but not without warning signals. Severe pest attacks occurred in 1987 and 1994. Several farmers had committed suicide, unable to clear their debts. In the urge to reap higher yields and to make up for accumulated debts, more land was brought under cotton and more money was borrowed to increase the inputs.

But in 1996-97, the monsoon failed. Nearly 70 per cent of the cotton area in ap is rainfed. In Warangal, the worst-affected district, only 942 mm of average rainfall was recorded. In the 1997-98 monsoon, this came down to 771.8 mm. The normal annual rainfall is 1048.1 mm. The rains failed to arrive in the June-August period, when intensive irrigation is required. Moreover, there were excessive rains in October-December, the harvesting season, when it is least required. Excess moisture or poor drainage is not suitable for cotton.

The cotton crop was not expected to be very good this season. Enter S litura and H armigera in numbers never seen or heard of in this region. S litura is a nocturnal insect that eats away the entire cotton plant.

Although farmers burn the insects by basketfuls, the female can lay up to 4,000 eggs, ensuring that populations keep rising. In district Warangal, yields have fallen from 1500 kg/ha to 300 kg/ha due to the pest. The attack has been worse in rainfed areas. The American bollworm attacks the fruit of the cotton plant, which then starts to fall off.

"The fields should be called insectories rather than cotton fields," says Tewari. Entire stretches of standing crop were eaten away overnight. According to I V Subba Rao, vice chancellor, Acharya N G Ranga Agricultural University (angrau), Hyderabad, who visited the affected areas: "All the pests known to scientists were there to see on all the crops; something I have never noticed in my 50 years of experience," he says. In an effort to rescue the situation, farmers bought large amounts of pesticides on loan. About 200,000 kilolitres were sprayed in district Warangal itself, a new record for ap , the state that accounts for 33.6 per cent of the pesticides used in the country. Nearly 50 per cent of pesticides used in India are applied on cotton, an indication of just how vulnerable cotton is to pest attacks. About 130 species of insects and mites have been recorded under Asian conditions. In the Indian subcontinent, five sap feeders and four bollworms are commonly found, say Raheja and Tewari in The Environment Friendly Way in Crop Pest Management , a publication of the icar.