Death of a Tigress

A hit-and-run case in Bandhavgarh. Who did it?

Death of a Tigress

MAY 19: Bandhavgarh National Park, Umaria district, Madhya Pradesh 5.30 AM: Safaris enter park 5.55-6.15 AM: A tourist guide spots a tigress by a reservoir. The tigress, Jhurjuria, lives with her three cubs in the Tala Range in the park.

Blood was oozing from her mouth and nose, and she was limping in the left leg, said Yakub Fazal, a tourist. More vehicles gather at the site. The tigress, half submerged in water, gets out and climbs, clumsily, a steep embankment.

Growling, she charges towards the vehicles, which retreat. A guide informs a forest official about the tiger. 6.45 AM: The assistant conservator of forests arrives at the site. The tigress was limping, unable to drink water. Something seemed stuck in her throat. She entered the reservoir and disappeared. 9.20 AM: Mahouts find her in the Jhurjura dam area. She was dead.

SPECULATION: A hit-andrun case
—A minister’s son, with foreign tourists, entered the park in a SUV at midnight, local tourist operators and wildlife officials told Shehla Masood, who runs the nonprofit Udai in Bhopal. Masood’s sources later backtracked, she said. 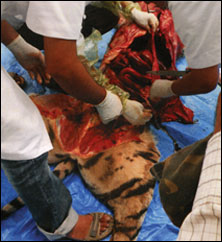 POST MORTEM: May 20
—Jhurjuria died between 9.15 am and 9.30 am. A hard object hit her five hours before she died. It injured her left shoulder and thigh, and caused haemorrhage. Post-mortem done in the presence of wildlife photographers and special visitors INQUIRY: Report on June 1 (by Rajesh Gopal, member secretary of National Tiger Conservation Authority)

—Three vehicles entered the national park in late afternoon on May 18. One vehicle returned on May 18, around 9.30 pm, through the main gate. Two other vehicles stayed in the park. The people travelling included Akshay Kumar Singh, the CEO of Zila Panchayat, Umaria, a relative of his and three children, Lalit Pandey, a range officer, K K Pandey, assistant veterinary surgeon of Tala and two drivers. They visited Baheraha in Magdhi Range, which is not open to tourists. The range is located in the south of the Tala range. Then they went to Tala, and returned via the Bhadrashila barrier, instead of the main gate. The barrier is a kilometre from the main gate.

—Strong indication that one of the vehicles hit the tigress —K K Pandey who owns the Tiger Heaven lodge has considerable influence in the area. He was present during the post-mortem and volunteered to bring the report from Jabalpur.

UNANSWERED STILL: —The report does not mention the extent of the damage. “Was it a speeding vehicle that hit the tiger?” Masood asked.

—No forensic examination of the vehicles. The vehicle that hit the fully grown tigress could have some signs of damage or evidence such as blood or hair, said Masood.

—How could K K Pandey drive one of the suspect vehicles to Jabalpur?