Developing countries are dumpyards for e-waste

A recent study in the US shows that by 2004, over 315 million computers will become obsolete. By 2005, for every single computer an American buys, one will be discarded

Developing countries are dumpyards for e-waste 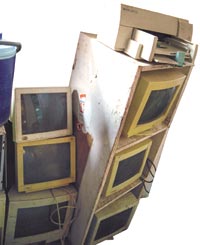 Exactly what is the new millenium all about? Some call it the time of the information technology (it) revolution. Some say it is globalisation turning mature. But, as one looks for ways to name the present, there pops up a phrase with a murky neologism in it: the new millenium is also the era of e-waste.

A recent study in the us shows that by 2004, over 315 million computers will become obsolete. By 2005, for every single computer an American buys, one will be discarded. California alone discards more than 6,000 computers daily. In Europe the volume of e-waste is increasing by 3-5 per cent per annum, almost three times faster than the growth in municipal solid waste.

So should we panic? The standard answer is: the problem of e-waste is limited to the industrialised world, so India and other developing countries needn't worry. But reality dictates we need to worry, for two reasons. Firstly, India is a major presence in the it world. In 1995-2000, the Indian it industry recorded a compounded annual growth rate of more than 42.4 per cent. Indians use at present about 12 million pcs, 13 million mobile phones and 70 million televisions. Soon, these goods will enter the waste stream. Already, close to 1.38 million pcs become obsolete in India annually, and manufacturers and assemblers alone are creating about 1,050 tonnes of electronic scrap every year.

Secondly, most pcs trashed in the industrialised world find their way into our backyards, as 'recycling' or 'donation'. Hence, we face a double burden: managing home-grown e-waste, and 'recycling' someone else's junk! Reports such as Exporting Harm: The High-Tech Trashing of Asia by the Basel Action Network (ban) clearly show how the illegal export trade in e-waste considers India, Pakistan and China the all time favourite destination.

e-waste is a problem both at the manufacturer's end, and at the user level. Computers are not designed per se for recycling. For instance, the new pcs have most operations in-built, which means the hard disk cannot be upgraded. Points out a 2003 report by Toxics Link, Scraping the Hi-Tech Myth, Computer Waste in India, 'the it sector moves according to Moore's law, whereby the chip processing power doubles every 18 months. Due to this rapid advancement, the average computer life span has shrunk to less than two years'. As new technologically improved models hit the market, more e-waste is generated.

Manufacturers also fail to take responsibility for their product. Once the product is sold, disposal becomes the consumer/user's headache. In some industrialised countries, manufacturers run recycling programmes, but of dubious efficacy. Points out the ban report: 'around 80 per cent of what is diverted to recycling (in the us) is actually exported to Asia'. The us government has no idea how much e-waste is exported from their territory or where it goes, adds the report.

e-waste management is poor. While most of it is 'recycled', the rest ends up in landfills, where it becomes a 'conglomeration of plastic and steel casings, circuit boards, glass tubes, wires, resistors, capacitors, and other assorted parts'. The ban report says about 70 per cent of heavy metals found in landfills come from electronic discards, which contaminate the groundwater. e-waste is also incinerated, leading to hazardous emissions. For instance, copper commonly found in e-waste acts as a catalyst for dioxin formation.

But the chief means of managing e-waste is export to poor nations for 'recycling' because the labour cost there is low, and environmental and occupational regulations weak. A pilot project conducted by the United States Environmental Protection Agency (usepa) estimated it was 10 times cheaper to ship crt monitors to China than it was to recycle them in the us. Guiya, in the greater Guangdong Province of China, is an infamous e-waste recycling spot. ban carried out a survey of this area, and reported the soil and water there were heavily contaminated.

Similar surveys were carried out in New Delhi (Mandoli, Sadar Bazar, Kanti Nagar Extension, Old Sealampur and Turkmangate). It was found that Indian e-waste dealers make bids on sea-going containers at the inland depot situated at Okhla, New Delhi. The material is then taken out, sorted and distributed between various recyclers. Some components (such as ic chips) are sent for re-use. Others that cannot be re-used are sent for open burning, to extract metals like copper. pvc-coated cables are openly burnt. Nitric acid is also used to remove gold and platinum. Both open burning and acid-baths lead to occupational exposure to pollutants, and jeopardise the health of nearby communities. Very often children are employed to carry out these operations. Exposure to pollutants from e-waste has been linked with various health problems -- silicosis, respiratory irritation and pulmonary oedema.

There are regulations on e-waste trade, but toothless ones. On a larger scale, there is The Basel Convention on the Control of Transboundary Movements of Hazardous Wastes and their Disposal, which was adopted in March 1989, to check trade in hazardous waste. As of June 2003, only 37 countries have ratified the convention, but for it to come into force at least 62 ratifications are required. Some of the big generators of e-waste, like the us, have not ratified the convention. So they can freely export their waste. In India, we have the Hazardous Waste (Management and Handling) Rules, 1989. But schedule-i of this law does not cover e-waste.

Some countries are putting in stricter regulations to check trade in e-waste. Says D B Boralkar, additional secretary with the Central Pollution Control Board, "In Australia, a permit is required for all export and import of waste electrical and electronic assemblies or scrap (unless they are free from hazardous constituents). Switzerland has introduced an ordinance on the return, take back and disposal of electrical and electronic appliances. The European Union also introduced a directive in January 2003 on the restriction of the use of certain hazardous substances in electronic goods." Interestingly, the us refuses to put in place such regulations. For instance, circuit boards destined for recycling are considered scrap metal and therefore exempt from regulation under their Resource Recovery and Conservation Act. A senior official of the Union ministry of environment and forests explains the problem, "We can define something as hazardous and ban its trade, but what can we do if the largest generator of e-waste (read: us) refuses to label it as hazardous and continues its export?"

The solution remains making products eco-friendly. Many companies are now manufacturing electronic goods sans hazardous elements. The eu is also restricting use of such hazardous components in pcs. The challenge for India is to learn from these experiments.