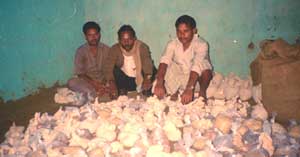 The legend in Bastar is that there was a clash between dhan (rice) and human beings. The winner would feed on the loser. First, they compared varieties, and discovered that there were as many varieties of rice as there were human beings. However, all these varieties were of one form. Humans, on the other hand, differed in form and appearance. Humans won, and fed on rice ever since.

The tribal-dominated region of Bastar, an interior district in Chhattisgarh, has achieved tremendous success with their bold rice varieties conservation programme. Dharohar Samiti, the non-governmental organisation (ngo) based in Golavand village, is spearheading the programme. The samiti has set up a seed bank that works towards conserving traditional rice varieties (Bastar, it is believed, has over 1,000 varieties), as also ensuring that seeds are readily available to farmers.

The main tribes of Bastar -- Halba, Muriya, Bhatra, Gond and Ghanda -- are primarily engaged in agriculture. Even before their interaction with the Dharohar Samiti, the farmers of Bastar were conserving traditional rice varieties in their own way. Farmers would, for example, cultivate varieties that their neighbours were not. The Dharohar Samiti succeeded in organising these individual efforts into a concerted community effort.

Chandra Kishore Samarth, known as Chokhy, left a secure government job to set up the Dharohar Samiti. Samarth, who had worked on tribal welfare measures for a number of years, realised that agriculture would be the best way of reaching out to the people of Bastar.

He got a land on lease at Golavand and grew Ghoda Chavar, a traditional rice variety. He harvested 20 khandis (one khandi equals 36 kg) in the first year, and gave it out to farmers on request. However, Samarth suffered a loss when the farmers were unable to return the seeds on harvesting. He then came up with the idea of group farming. He bought land and encouraged farmers to cultivate it on the condition that he would be returned five khandis of rice or Rs 500 for every 20 khandis harvested. In 1994, he was joined in his efforts by Shivnath Yadav, now treasurer of the samiti, and Hitendra Shrivas, now secretary.

The main inspiration behind the samiti's conservation work was Muneer Alavi of the Mumbai-based ngo Rural Communes. The group farming idea, in fact, was largely Alavi's. The experiment did not work in Golavand, though it was successful in Bade-doongar, where women took over the initiative. Samarth attributes the failure to the unwillingness of people from different communities to work together. Muneer then suggested that the samiti collect traditional varieties of rice. By 2000, the samiti had collected about 341 varieties of rice.

But Samarth and his colleagues were not satisfied. "Seed varieties were stored and cultivated, but this did not serve our purpose. Diversity must be maintained at the field level, with the involvement of farmers." he says. This led to the establishment of the seed bank at Golavand. The seed bank works on the principle that for every khandi of rice taken away by the farmer, 1.5 khandis must be returned to the bank. Sukhdar, a farmer from Golavand, says, "I grow traditional varieties, like Assamchudi, Gadhakhota, Jhondhra and Barangi, in my fields. Sarkari dhan (high yielding varieties (hyvs), rice supplied by the government) does not have the taste of these varieties." Farmers here have continued with their traditional methods.

The concept of seed banks is spreading to other villages as well. "Earlier, villagers had to bribe sahukars with liquor bottles in order to get their seeds on time. We now get seeds on time from the seed bank at Golavand," says Harchand from the neighbouring Hira Mandla village.

Dharohar Samiti has also started the conservation of minor millets and vegetables in the region. However, constraints in the form of language, different names for identical varieties, lack of land and finance, and the presence of Naxalites makes their work, as Samarth puts it, 'challenging'.