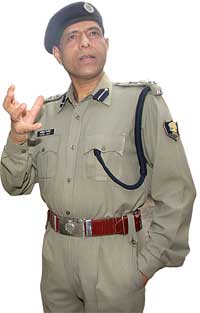 Got a complaint? Ring the bell

The plaque at the rusted iron gate announces Tirhut Range Police Residence, Chakkar Maidan, Muzaffarpur. Under it is a palm-size icon of a bell, which looks more like a quaint advertisement. A careful look shows an electric bell in the middle of the icon. Whoever presses it would have the deputy inspector general (dig) of police at his or her service, listening to grievances.

This is Jehangiri bell, dig Arvind Pandey's way of ushering responsible policing and changing the image of the Bihar police. When a petitioner rings the bell, Pandey ensures two actions one for the welfare of the complainant and one against the officer-in-charge who could not resolve her or his grievance. The dig believes it is easy to spread a message through traditional means, so he decided to take a leaf out of history books to become more accessible to the people."Emperor Jehangir's style of justice through his bell is well known and people can relate to it," said Pandey, 48.

Is the idea working? Tirhut range police records show that since the installation of the bell in August last year crime rate in the area has come down 30 per cent and prosecution rate has increased three times.

The first person to ring the Jehangiri bell was Archana Devi, whose eight-year-old son was murdered in August 2008. She complained a notorious criminal in the area had killed her son. "The officer-in-charge of the Bocha police station had not lodged the fir. I took up the matter and gave him a week to arrest the accused. In four days Vishwanath Chowdhary was arrested," Pandey said.

Archana Devi refused to talk about the case but she showered the dig with praise. "For the first time I met a police officer who is humane. Pandey listened to me and consoled me. He put the killers of my son behind bars," she said.

The dig's office and residence are open to complainants even on Sundays and festivals. He meets 100 to 150 people in a day. "Since August I have received about 10,000 complaints. And for each complaint I have either taken action against the erring police officer or counselled the officers to improve their working style. Crime has to be brought under control and we senior officers have to go the extra mile for it," said Pandey, who will soon move to Patna for his next assignment as dig, Gover-nment Railway Police.

Before he installed the Jehangiri bell, Pandey had launched the Bihar Bhakti Sabha movement in 2006 as part of his anti-litigation policy to ease pressure on the police. The sabha constitutes complainants, defendants, police officers and local leaders who sit together to resolve a dispute. "The majority of land disputes are associated with ego and fight for honour. These cases can turn violent any time. Moreover, lengthy trials in court make it difficult for us to control crimes arising out of land or property disputes. We try to solve these cases amicably," said Pandey. About 500 land disputes have been resolved through such sabhas, said the dig.

Laxman Ram of Muzaffarpur had been fighting for a hectare of agricultural land his younger brother Sanjay Ram had forcibly taken from him 40 years ago in Ambikaganj village. In February, he took the case to the Bhakti Sabha. "Laxman Ram had legal papers of land ownership. We held a meeting and the accused vacated the land in police presence," said Jitendra Singh, officer in charge of Muzaffarpur Police Station.

In his effort to ring in changes in policing Pandey has had to take on his officers. In June last year he suspended some officers, mostly for dereliction of duty. But suspended officers preferred to enjoy the suspension, so the dig issued orders that suspended officers will have to work.

Pandey has deployed not only traditional wisdom but also cutting-edge technology to reach out to the people. He has made his Orkut address public. Anyone seeking justice can send him a message or e-mail through the online networking site. "I remember one Sweta Singh, a resident of Muzaffarpur who was working in Hyderabad. She complained her parents were being harassed by a neighbour. We immediately sent an officer to her home town," he said. The next day Pandey had another message from Shweta saying thank you.