Niyamgiri gears up for India’s first environment referendum. Odisha limits number of villages that can have a say 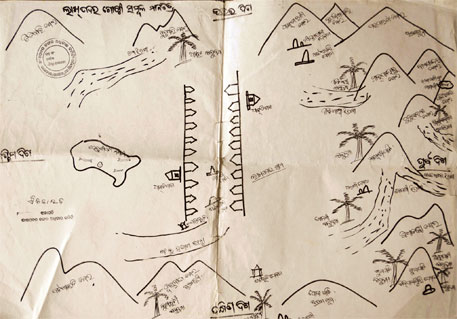 A reclusive hill tribe in western Odisha has forced the state and the Centre along with the judiciary to come to its doorstep. Beginning July 18, the Dongria Kondh, designated as “primitive” tribal group, along with other tribal and non-tribal forest dwellers will decide whether bauxite mining in the Niyamgiri hill range will impinge on their cultural and religious rights. District judges, nominated by the Odisha High Court will ride, walk and climb uphill for long hours this monsoon to reach villages cocooned inside the dense tropical forest of Niyamgiri—to record the decision of the palli sabha, as gram sabha is known in Odisha.

The landmark event—India’s first environment referendum—will follow the Supreme Court judgement delivered on April 18 this year, while deliberating upon a case brought by the Orissa Mining Corporation Ltd (OMCL) against the Union Ministry of Environment and Forests (MoEF).

In 2010, MoEF had rejected environment clearance to a joint venture of OMCL and Sterlite Industries, the Indian arm of the London Stock Exchange-listed Vedanta, to mine the Niyamgiri hills for bauxite to feed Vedanta’s alumina refinery in adjacent Lanjigarh. MoEF’s grounds for rejection were violation of the Forest Rights Act (FRA), Environment Protection Act and the Forest Conservation Act. OMCL challenged MoEF’s decision in the Supreme Court in 2011.

The apex court stressed on the role of gram sabha to decide on the forest dwellers’ claims to forest resources and on their religious and cultural rights. It asked the state government and the Union Ministry of Tribal Affairs (MoTA) to assist gram sabhas in the process.

If the gram sabha takes place “independently and uninfluenced” by project proponents and the state and the Centre, as ordered by the apex court, it will be the first time communities will decide the fate of a mining project.

Are voices being suppressed?

At least 162 villages depend on or live in the Niyamgiri hills spread across Rayagada and Kalahandi districts, says Lingaraj Azad, an organiser of resistance group Niyamgiri Suraksha Samiti. As per the state government’s Dongria Kondh Development Agency (DKDA), there are 102 Dongria Kondh villages in Rayagada. But in May, the state government drew up a list of only 12 hill slope villages where palli sabhas will be held.

The arbitrary list received flak from the Union tribal affairs ministry. “The list of villages where rights of forest dwellers are guaranteed under the FRA or where cultural and religious rights are likely to be affected cannot be arbitrarily decided by the state government. It is to be decided by the people, i.e. palli sabha, where claims would be filed through a transparent manner so that no... gram sabha who has a legitimate claim is left out of the process,” wrote Vibha Puri Das, MoTA secretary in a June 7 letter to the state government.

Two weeks later, Union tribal affairs minister Kishore Chandra Deo wrote a letter to Governor S C Jamir, saying: “It is unfortunate that the directions of the Supreme Court are being treated with scant respect by the state government... convening of gram sabha should not be limited to only 12 villages but should cover all affected villages in the region.”

Yet, holding onto its list of 12, the state government notified dates of palli sabha on July 5. It says the list has been vetted by the law department and the state Advocate General. Palli sabhas will be held on 12 separate days, one for each village, between July 18 and August 19.

Anger and distrust are palpable among the forest dwellers. On June 17, when the state government organised an orientation workshop in Trilochanpur village in Kalahandi to inform the process of filing claims, the residents locked up the officials for an entire day. They refused to sign on attendance sheets or to be video graphed during the workshop, suspecting these would be misused by the government. Azad says tribal leaders plan to organise palli sabhas in all affected villages under the Orissa Gram Panchayat Act.

Why Niyamgiri is sacred

The proposed mining in 660 ha will wipe out much of the 721 ha of forests spanning the Niyamgiri—a rich and diverse ecology. There are between 650 to 754 trees in every hectare of the forest, notes a paper published in scientific journal The Indian Forester in 2009. Meaning, if mining is allowed, no less than 429,000 trees will be chopped; over 8,000 Dongria Kondhs and other traditional forest dwellers will lose their abode or source of sustenance, or both.

A visit to the forests reveals that fruit trees such as jackfruit and mango are ample during summer and monsoon months. The hill slopes are lined with pineapple, turmeric and ginger in patches. With the onset of monsoon there is a buzz of activity—the tribals are felling small patches of forests, as part of traditional slash-and-burn cultivation, on dongar (hill slopes) where they would grow a mix of native millets, pulses and oil seeds. According to Living Farms, a non-profit working on indigenous food sovereignty in the region, the forest dwellers grow 53 varieties of crops without any chemical inputs. Alongside, the forest sustains 273 varieties of uncultivated food, including roots, tubers, mushrooms and insects. These meet 40 per cent of their food requirement.

Major rivers, the Vansadhara and the Nagaveli, and over 100 streams originate from the Niyamgiri. Its gorges, mountain peaks and plateaus are home to leopards, barking deer, sloth bear, pangolin and golden gecko, among others. Lado Sikaka, Dongria Kondh leader, is proud of this inheritance. “We can survive a drought year on wild tubers and roots. Everything we need is on this hill, which is the abode of Niyam Raja. We will not give it away,” he says.

The forest people of Niyamgiri worship the hills as the precursor to their lives; the forest-based ecology is their religion. The Supreme Court recognised this. “If the bauxite mining project, in any way, affects their religious rights, especially their right to worship their deity, known as Niyam Raja, in the hills top of the Niyamgiri range of hills, that right has to be preserved and protected,” it pronounced in the judgement.

The state government, however, had argued in the Supreme Court that Niyam Dongar is not where the tribals worship Niyam Raja. Instead it came up with another location, Hundijali, 10 km from the proposed mining site. “The Dongria Kondh and other tribals do not have a temple like Balaji or Tirupati where they go to worship their god. They worship the hill range as a whole,” says Sanjay Parikh, Supreme Court advocate and counsel in the case, adding, “the court made it clear that locals will have the final word on this.”

For the mostly illiterate forest dwellers preparing claims for their rights to dongar, what they collect from forest and grazing lands and delineating traditional boundaries of a village by drawing maps is a daunting task.

Susanta Kumar Dalai, a programme officer with Living Farms who has been helping the forest dwellers file community and individual claims under FRA since 2007, says, “People here only know of DKD sarkar (misspelt acronym for DKDA) and Vedanta. They do not understand laws, the Supreme Court rulings nor the drama around their lives ever since the word ‘mining’ reached them.” In 2010, Dalai helped 39 villages file community forest rights claims. Not a single claim has been settled yet. Filing claims to assert cultural and religious rights is further challenging. For this, forest dwellers need to produce ethnographic record of their rituals, places of worship, festivals and the spiritual and visceral connection of different clans with each other and the hills, says Dalai.