Parliament owes a good discussion on the bill 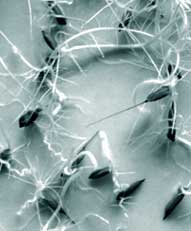 It is clear. In drafting the Seeds Bill 2004, the Union ministry of agriculture (moa) has failed the Indian farmer. All the consultations held by the ministry brought out only one thing: here was an opportunity for the seed industry to get back what it lost in the Protection of Plant Variety and Farmers' Rights Act (ppvfra). Now the matter has moved to Parliament. Members of the standing committee on agriculture have to remember this. They will have to undo what moa has done. They will have to read up ppvfra and the Biological Diversity Act and ensure that the bill recognises the prior legislations. Each clause of the bill has to set out its objective unambiguously, so that accountability is fixed and roles of each player in the seeds regulatory system defined.

Unfortunately, the Indian Parliament has ceased to be a forum for creative discussions. More often than not, political bombast ensures that important laws are passed without good discussions. Which is where social groups and media have to ensure the Seeds Bill discussion stays alive -- politicians take things seriously only when they suspect political fallout of their actions. Which is good in one way. Parliamentarians have more accountability than bureaucrats in a ministry. They have to face voters, and farmers comprise India's biggest vote bank.

When/if the Seeds Bill is discussed in Parliament, it will be the might of the farmers' vote pitted against the deep pockets of large seed companies. The upa government came to power on a rural vote from an India that wasn't shining. Can it address farmers' desperation?