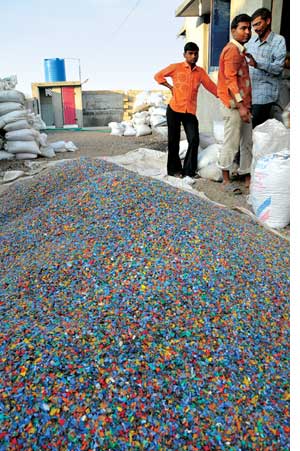 1) burn it with cement

Cement manufacturers like Lafarge and Holcim have undertaken trial of co-processing hazardous waste in cement kilns that operate at 1,400C and above. Holcim has completed trial runs for 14 hazardous materials and is using waste for co-processing in 25 of its plants in India. "Anything that can be destroyed at a temperature ranging from 200C to 2,100C can be put into a cement plant," said Ramesh Suri of Holcim Services (South Asia) Limited. Cement even binds with heavy metals, he added.

cpcb is drafting guidelines for co-processing hazardous waste in cement plants. It conducted four trials over 2005-06 in Gujarat, Karnataka, Tamil Nadu and Chhattisgarh.The monitoring results showed while dioxins and furans remained below the limits for a hazardous waste incinerator, there was an increase in particulate matter and nitrogen dioxide in some cases.

According to a presentation by Jurgen Porst of gtz, co-processing will lead to lower greenhouse gas emissions by saving fossil fuel used in incinerators and cement plants. The waste is both burnt in the kiln and used as fuel for the kiln. "A substitution by 50 per cent (of fossil fuel in a cement plant) in EU is equivalent to saving emissions from 10 million cars," it said. Besides, a cement kiln has much higher temperature compared to an incinerator, keeps waste for longer inside it and has more oxygen leading to complete combustion, according to the presentation.

But not all kinds of waste can be fed into a cement kiln. According to Porst, too much chlorine causes blockage, corrosion and emissions, and wastes containing mercury or thallium and too much heavy metals like electronic waste is not suitable. "Volatile compounds and chlorine can also destroy the cement's quality, so pre-processing of waste is critical," said Ravi Agarwal, director of ngo Toxics Link in Delhi.

Thermal power plants generate fly-ash in large volume though it is less toxic compared to incinerable waste like pesticides. Over the years, the use of fly-ash in clinker (solid nodules that are ground further to make cement) has gone up in India. Though an inert material itself, it binds well with calcium hydroxide used in making cement, thus making concrete stronger, less permeable to water and more resistant to corrosive chemicals like chloride and sulphates.

Cement plants in India use 20-25 per cent fly-ash in their clinker, though as per the Bureau of Indian Standards, 35 per cent of fly-ash can be blended in cement. "The demand for fly-ash based cement is so high that the cement industry is now starving for good quality fly-ash that is absolutely dry and with no carbon particles," said Naveen Sharma, general manager of Lakshmi Cement in charge of environment and safety.

The traditional method of handling fly-ash in thermal power plants in India was mixing it with water to avoid its dispersion in the air. "Conversion of wet to dry fly-ash is complicated and expensive. But plants that have come up after 1995 trap ash through electrostatic precipitators that is then transported using a pipe. If ash is collected directly from the precipitator and sent to us, it will be of good quality," said Sharma.

Plastic is increasingly being used as raw material for road construction. In Tamil Nadu, more than 1,500 km of road was laid with plastic mixed with bitumen. Though the first stretch was laid in 2002, these roads have not yet developed potholes. A 30-km stretch of road in Bangalore and a 1-km stretch in Delhi have also been laid with plastic mixed with bitumen.

According to cpcb, mixing bitumen with plastic doubles the strength of the road and increases its water resistance, thus making it potholes-free. It also curbs melting of tar in summer. Moreover, it does not involve extra machinery, so no extra cost. On the contrary, it brings down the cost by reducing the use of bitumen, says the board. The cost of bitumen is Rs 35,000 per tonne, whereas plastic costs Rs 5,000. According to the Central Road Research Institute in Delhi, plastic increases the adhesiveness of bitumen that binds granite stones. The Delhi Pollution Control Committee has ratified use of plastic in road as a way of managing plastic waste.

4) Feed it to earthworms

Vadodara-based biotechnologist Suneet V Dabke has devised a technology which uses earthworms to convert low-toxic sludge, like that produced by effluent treatment plants, into organic manure. Known as vermiculture biotechnology, the process is similar to vermicomposting of municipal waste but requires special species of earthworms. "Depending upon the characteristic of the waste, it is neutralized in one to three years with negligible amount of toxins left," said Dabke. But the technology is expensive it costs Rs 7,000-8,000 per tonne of waste in the first year; by the third year the cost is down to Rs 2,000 per tonne.