Half the toys tested have unsafe phthalate levels 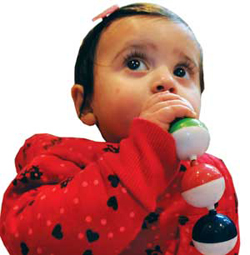 They lurk inside plastics, and from there migrate to air, food, human body and even unborn babies. Phthalates or phthalate esters are organic chemicals commonly used as plasticizers to make plastic supple. They are responsible for plastic products being cheap, easy to clean—and toxic.

Phthalates can damage the male reproductive system, impair the lungs and affect the duration of pregnancy. They also reach babies through breastfeeding. Animal studies have shown phthalates cross the placenta barrier. Children under three years are more likely to be exposed to phthalates because they tend to chew and suck on plastic toys. Since their metabolic, endocrine and reproductive systems are immature, they are more vulnerable.

Phthalates are produced by removing water molecules from petrochemicals.


They look like clear vegetable oil and are odourless. Till recently di-2-ethylhexyl phthalate (dehp) dominated the use of plasticizers in toys. After scientific studies showed dehp as toxic, di-isononyl phthalate (dinp) has become the most commonly used plasticizer. Studies show dinp is also harmful. The EU and the US strictly regulate the use of phthalates in toys but in India there are no checks on their use.

Eleven samples (46 per cent) had phthalates exceeding the EU limit of 0.1 per cent by mass of plasticized material. The threshold limit cannot be set lower than 0.1 per cent as phthalates can be found below this level as contaminants in the manufacturing process even if not used as plasticizers.

dehp was detected in 96 per cent of the toys but in concentrations below the EU limit, except in a teether and two toys: inflatable bop bag dinosaur (0.2 per cent, twice the EU limit) and bath duck (2.6 per cent). The baby teether ostensibly made of non-toxic, food-grade silicone rubber had dehp at a concentration three times the EU limit. It was made by a company in Taiwan.

dbp was found in soft and hard biters at levels two times the EU limit.

The majority of the toys, which contained high levels of phthalates, were made in China. Six squeeze toys from China contained phthalates two to 80 times above the EU limit. Four of these were made by Lovely Collection, which did not even bother to mention the address of the manufacturer and the date of manufacture on the package.