Drowning in its own rubbish

For Thiruvananthapuram, the only way to manage waste is by flouting rules

Drowning in its own rubbish 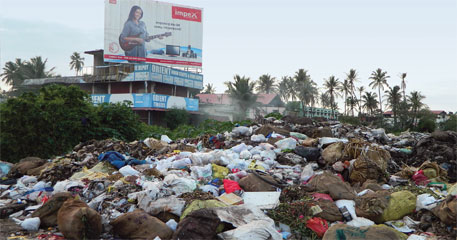 THESE days K Rajan gets sleepless nights thinking about where to dispose of garbage the next morning. Once he has identified the location, his next move is to go there with an earth mover, bury the waste and escape from the place as fast as possible fearing public protest. Rajan is one of the 26 health inspectors of Thiruvananth apuram Municipal Corp o ration in Kerala who say waste disposal has become a worry for them.

But burying and burning unsegregated garbage pollute soil, groundwater and air, flouting the Municipal Solid Waste Management and Handling Rule, 2000. City mayor Chandrika K admits the wrongdoing, but asks, “What else can we do?”

Thiruvananthapuram’s one million population produces about 300 tonnes of waste a day. For over 10 years the corporation sent the waste to its only solid waste treatment plant in Vilappil village panchayat, on the city outskirts. But since December 2011, the village residents are not allowing the corporation to dump garbage in their backyard.

They say the plant has made their lives hell by polluting the surroundings (see ‘Why Vilappil says no to waste’ on P11). Last year, while hearing the case between the corporation and Vilappil panchayat, the Kerala High Court allo - wed the corporation to take 90 tonnes of waste to the plant after equipping it with scientific faclities. “The residents do not even allow us to take machinery to the plant,” says Chandrika.

Unable to take garbage to its waste treatment plant, the corporation started popularising source-level waste management, which includes simple techniques of composting and biogas production and offered subsidies in the range of 75-90 per cent. But, according to Chandrika’s own admission, these take care of only one-third of the city’s waste. “We have to bury or burn the rest to keep the city clean. Almost all the land under the corporation has been exhausted and it has become difficult to find a new place for burying garbage.”

Even simple techniques failed
One of the simplest techniques is pipe composting, in which biodegradable waste is converted into compost naturally by putting it in two one-metrelong, 20-cm-wide PVC pipes with caps that remain fixed vertically on the ground. It is suitable for a family of four.

The state gives 90 per cent subsidy on its installation cost of Rs.893. A small biogas unit that produces gas suitable for cooking from organic waste costs Rs.8,500. A bio-bin that can degrade waste, except paper, plastic, coconut shells and diaper, into compost costs Rs.82,000. It is made of two fibre boxes filled with a bacterial solution that turns garbage into compost. It can cater to 40 apartments. The state offers 75 per cent subsidy on biogas plants and bio-bins.

Suchitwa Mission, the state government’s nodal agency for implementing sanitation programmes, gave Rs.5.7 crore to the corporation to meet the subsidy expenses. So far, the corporation has spent about Rs.4 crore on subsidies. On paper, a fifth of the 300,000 households in the city has pipe composting, 250 flats have biogas plants and 120 of the 150 apartment complexes have bio-bins.

But not many seem to be working. “Many families in our colony did not know how to use pipe composting and started throwing waste in a park within the colony,” says K Ranjini, secretary of the residents association of Kawadiar Gardens, a posh housing colony. “The problem is the corporation did not give proper instructions on how to use the pipes. There was no word of advice even for managing non-biodeg - radable waste.” Ranjini sought help from Thanal, a non-profit advocating zero waste. The residents’ association has collaborated with rag-pickers to pick non-biodegradable waste once a week. Kawadiar Gardens is one of the few residential areas in Thiruvananthapuram that has taken initiative to solve the garbage issue. Most residents continue to throw waste in the open or burn it. Even as the corporation itself flouts rules, it imposes fine on people for throwing waste in public places. In June this year, it earned Rs.28,780 from fines.

The corporation authorities say they had conducted biogas melas and people had shown enthusiasm because the price of cooking gas was on the rise. The initial interest died after they realised that those who have availed subsidies for composting will not be eligible for biogas subsidies.

Though the corporation had asked hotels to manage their garbage, most hotels give their waste to private agencies. Nobody monitors where these agencies dump the waste. The Kerala State Pollution Control Board (KSPCB) recently received complaints that garbage from Thiruvanathapuram ends up in bordering areas of Tamil Nadu, says K Sajeevan, chairperson of KSPCB.

He admits that the board has not taken steps to check this because waste management is local body’s responsibility.

Though its design violates the Central Pollution Control Board (CPCB) norms, KSPCB gave it a go-ahead for trial run.

Stalk height of the incinerator is 11 metres, whereas it should go beyond the breathing range of people and be more than 30 metres as per CPCB norms.

Sajeevan, however, says the only problem with the incinerator is high fuel consumption. It consumes about 135 litres of diesel per hour against the 40-50 litres claimed by the manufacturer. That means the expense on fuel per hour is around Rs.7,300. Accoding to M Dileep Kumar, director of the Suchitwa Mission, the state government wanted the corporation to bear 50 per cent of the expenses, but it refused.

“A local body cannot afford to spend such a huge sum for burning just 0.5 tonnes of waste,” says Chandrika.

The government also plans to build a waste-to-energy plant at the cost of Rs.60 crore though there is hardly any such plant in the country that can be described as a success. The plant will use integrated gasification technology in which waste will be burnt at high temperature to produce energy. It will be set up at Chalai market in the heart of the city. The project is a public-private partnership in which the government will provide land, the corporation will supply waste and a private company will build the plant and produce power.

“The plant is expected to generate 6 MW, of which 2 MW will be used by the company. It will sell the rest to the Kerala State Electricity Board for Rs.7.90 a unit on a contract for 25 years,” says Kumar. It will not produce any leachate and the discard will be as low as two per cent, he adds. KSPCB approved the project in July 2012 and the government has allocated one hectare for the plant, supposed to begin operating in December last year. The project got embroiled in controversy after media reports highlighted that Loro Enviro Power, which bagged contract for the plant, is a fictitious company.

Meanwhile, the land meant for the plant has turned into a dumpyard and a Vilappil-like situation is emerging there. Those living close to the dumping ground are poor and suffering from diseases. “It’s better to kill us than make us live in this hell,” says R Subaida one of the residents bursting into tears.

Exactly a year ago, while speaking to Down To Earth on the waste disposal crisis, Kerala’s Urban Development Minister Manjalamkuzhi Ali and the then director of Suchitwa Mission, George Chackcherry, had confidently said that the problem would be resolved within a year. But the crisis seems to have become more complex. While the authorities are yet to find a way out, the city’s health status is deteriorating.