With the deadline for converting its entire bus fleet to compressed natural gas drawing near, the Delhi Transport Corporation looks for excuses and more time to meet its target as it plays into the hands of the diesel lobby 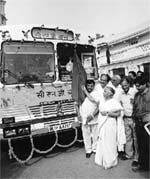 april 1, 2001 , the date set by the Supreme Court ( sc ) for the Delhi Transport Corporation ( dtc ) to convert its entire bus fleet to compressed natural gas ( cng ), is also All Fool's Day. And, going by the present state of affairs, it may well turn out to be so for dtc .

Faced with the challenge of reducing particulate matter in Delhi, in July 1998, the apex court ordered buses more than eight years old to be converted to run on cng or other "clean fuels" by April 1, 2000 and the entire bus fleet by April 2001. The court also directed the Delhi government to increase the number of buses from the present 7,000 (including private operators) to 10,000 by April 1, 2001. Accordingly, as confirmed by V K Bhatia, deputy chief general manager, dtc , about 1,848 eight-year-old dtc buses will have to be converted to cng by April 2000. In addition to this, some 1,030 more privately-run buses will also be eight-year-old by March 31, 2000, according to reliable sources (see table: Numbers game ).

The sc directive applies to both dtc and privately-owned buses in Delhi. Says Bhure Lal, chairperson, Environmental Pollution (prevention & control) Authority, "Not only the dtc but privately-operated buses also will have to shift to cng . In fact, the government should make shifting to cng or other clean fuels conditional to giving licenses to these private operators." But private operators have no clue about the order (see box: What's the truth? ).

So far, dtc has done little in terms of framing an action plan for its implementation. With the deadline approaching, the target seems to be getting increasingly unachievable. Delhi chief minister Sheila Dikshit has already started seeking more time. "We are neither confident nor sure whether we will be able to supply over 1,800 cng buses (more than eight years old) by March 31, 2000. We may even have to approach the Court at a later stage," she told the media recently.

In fact, dtc has already filed an affidavit in the sc seeking not just an extension of the deadline but also modification of the court orders. It has requested the court to interpret the order on "clean fuels" to include improved diesel buses, which means the court should allow dtc to procure Euro I-compliant diesel buses for which it had already placed an order in October 1998. Out of the 400 buses ordered, 35 have already been delivered.

The industry grapevine has it that the diesel lobby is pressurising dtc to get the proposal to sell diesel buses reviewed as an interim measure till the conversion to cng is completed at a much later date, says a government official on conditions of anonymity. In fact, dtc has submitted a five-year "Augmentation cum Conversion" plan for the court's approval, which says it does not have sufficient funds to pay for the required number of conversion kits. Also, according to a dtc affidavit, a gradual phase-in would be a better option keeping in mind the needs of the commuter and development of infrastructural facilities.

According to the proposed plan, dtc would augment its own fleet from the present 3,122 to 5,000 by March 31, 2004. Of them, 2,614 would be cng buses, while 1,500 would be running on any "clean fuel". Effectively, there will be 4,114 buses running on clean fuel while 886 will run on diesel. Among these diesel buses, 633 would be Euro I-compliant while the remaining 253 would be the regular dtc buses. "When the Supreme Court has allowed diesel cars to ply if they meet Euro I norms, then why not our buses?" asks Bhatia. dtc has also asked the court to exempt these buses from conversion to cng .

Bhatia believes plying Euro I diesel buses is a very attractive option when compared to cng . "The initial cost is low, the operation cost is low, it is a proven technology and the infrastruc ture is in place," says Bhatia. It's another matter that the city cannot afford any more diesel vehicles, which could add to the carcinogenic particulate load in Delhi. There is another fact which seems to have eluded the dtc officials -- when diesel is used to ply even the most technologically sound vehicle, the particulate matter emitted only becomes smaller and thus more harmful as it can then penetrate deeper into the lungs.

Further, dtc has told the Court that just in case more environment-friendly options like battery-operated buses, hybrid vehicles, electric trolley buses and microprocessor-based diesel engines come along by March 2001, it does not want to be stuck with cng buses. Therefore, dtc is "keeping its options open" as far as clean fuels are concerned. But how can dtc , which is facing problems with the introduction of just one technology, cope with a range of other technologies? dtc has also mentioned in its affidavit that it is exploring the possibility of converting the 1,800 buses to run on propane and have sought an exemption from converting these buses to cng . But will dtc , which says it cannot bear the burden of providing conversion kits to the 5,000-odd buses it expects to operate by 2001, be able to afford the new, cleaner technology ?

Besides, the Delhi government is still without the requisite framework for introducing a new fuel technology. Emission norms for cng vehicles and fuel quality, safety norms for vehicles and parameters for trial runs are yet to be laid out. Spokespersons for transnational companies, speaking on condition of anonymity, say advance information on these parameters are very important to design buses for the Delhi market. But Central Pollution Control Board chairperson D K Biswas says: " cng is not an established automotive fuel, so we have not set standards. When it ( cng ) is used freely, we will set standards." In the absence of any clear benchmarks for both the engine and the fuel, there is a lot of uncertainty among manufacturers.

The dedicated cng engine from Ashok Leyland has a naturally aspirated engine with closed loop electronic control system. This engine sucks in air without the help of any other mechanism as opposed to supercharging which uses a compressor to take in more air in the cylinder for better combustion. When supercharging is done with the help of a turbine, the process is called turbocharging. According to Peter Ahlvik of Ecotraffic Sweden, turbocharging using a closed loop electronic control system in cng vehicles gives the best emission results.

An aspirated engine naturally emits more pollutants than turbocharged engines, says H B Mathur, a former professor at the Indian Institute of Technology, New Delhi. In a naturally aspirated cng engine, there is the probability of higher emission of oxides of nitrogen ( no x ), he says, adding, "Turbocharging is usually done in vehicles with higher horsepower. In India, high horsepower vehicles are few as compared to Europe or America, therefore, turbocharging is not so common in India. However, emission norms for cng engines are important to promote the state of the art technology and control escalation in any unwanted emissions like no x ."

Phasing in of cng involves both conversion of the old bus fleet to cng mode and the purchase of new engines. With just nine months to go, dtc is yet to convert a single bus to cng mode. As late as July 26, 1999, dtc floated a fresh tender seeking bidders for conversion of existing diesel engines to cng engines. "Once all approvals are in place and the road trial is done, conversion will not take much time," contends Bhatia.

Ashok Leyland has agreed to convert 500 buses to cng and the rest are to be converted by other companies, including Delhi-based Rare Technologies. But many companies have categorically stated that they will not convert buses more than 4-5 years old. There is an age bar on commercial vehicles in Delhi. Hence, there is no point in converting buses more than eight years old when they will be junked as soon as they turn 15. However, there are no clear dtc guidelines on this.

dtc 's approach gets worse when it comes to buying cng buses. Till date, it has placed an order for only 20 buses -- divided equally between telco and Ashok Leyland. While the latter has delivered five chassis of which one was inaugurated on June 24 this year, only one telco cng bus has hit the road till now (see box: A smooth ride ).

dtc insists the Court should give them more time as manufacturers will not be able to provide the cng buses within the deadline. It has listed its problems as limited availability of cng kits, inadequacy of cng stations and also some initial technical hitches. But on the basis of feedback from all parties concerned -- the manufacturers of buses and suppliers of cng ( Gas Authority of India Ltd) -- these excuses do not hold good. Bhure Lal has also confirmed that these problems have been sorted out (see interview: " dtc has no option but to implement the Court orders..." ).

Down To Earth investigations revealed that as early as December 1998, both telco and Ashok Leyland had written to dtc informing them that if allowed a lead time of 16-20 weeks, they would be able to deliver 50-40 dedicated cng chassis respectively every month provided a formal order is placed on time. Both the companies are still waiting for that order to materialise.

dtc has also questioned the wisdom of making such a huge investment on a technology that is still "under observation". Says Bhatia, " cng is a proven technology only as far as cars are concerned." What the corporation probably does not know is that currently there are more than one million vehicles running on natural gas in the world.

When asked whether the reason for requesting the Court for more time was because the corporation had been lax in implementing its order, Bhatia says: "We are a public service organisation and we are here to improve facilities for the people. If the court feels we have been lax in implementing the order, it can appoint an agency like the Environmental Pollution (prevention & control) Authority. They can assess our earnestness to perform." Public service organisation or not, the public will surely get to know by April 2000.