Ecotourism on the wing

Uttarakhand strikes a balance between conservation and employment by institutionalising birdwatching camps, says Ghazala Shahabuddin,who attended one such camp as trainer

Ecotourism on the wing 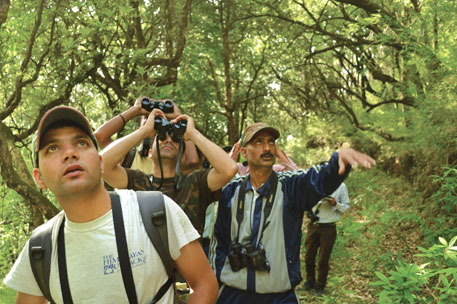 THE GOVERNMENT machinery had started whirring and the excitement was infectious. Preparations were under way for yet another birdwatching camp under the aegis of the Ecotourism Wing of Uttarakhand Forest Department. The camp was being organised at Mahesh Khan Reserve Forest near Bhowali. Earlier in the week, unexpected rains had washed the vegetation clean. Forests all around were lush and inviting, and the birdlife, abundant.

Reaching at the camp as a resource person a day earlier, I observed young people—forest guards, professional nature guides, tourism personnel, students and photographers—gathering from remote places in the Himalayan state. They greeted friends, colleagues and acquaintances from previous camps and discussed exciting bird sightings and work opportunities. As the day wore on, more and more bookings were requested on the phone. The number bulged to 38, leaving all of us squeezed for space in dormitories and cottages in the camping area. The camp was free for all participants, making it accessible to poor people.

The programme is the brainchild of forest officer Rajiv Bhartari. In 1994, birdwatching camps were held in parts of Corbett Tiger Reserve, when Bhartari, the erstwhile deputy director of the reserve, invited birdwatchers from Delhi, people from nearby villages, professional guides and forest guards for popularising bird-based tourism. The success of these camps led to the formal initiation of the Uttarakhand Birdwatching Programme in April 2012. Since then, there has been one camp almost every month in different locations, including Kedarnath, Binsar, Sankri, Dodital, Pangot, Corbett and Dhanolti. The camp at Mahesh Khan was 21st in the series.

The primary purpose of these camps is to train local people as nature guides who can then be associated with tourist facilities, resorts and homestays. The larger aim is to demonstrate the possibility of nature-based tourism, including birdwatching and trekking, as one of the viable livelihood avenues for the people of Uttarakhand, a state of unsurpassed natural beauty and biodiversity. Increased numbers of tourists bring in additional livelihood opportunities for people through village-based homestays, taxi services and restaurants in the hills. Besides, promoting birdwatching as a hobby among city-based tourists helps instill ecological consciousness among them. 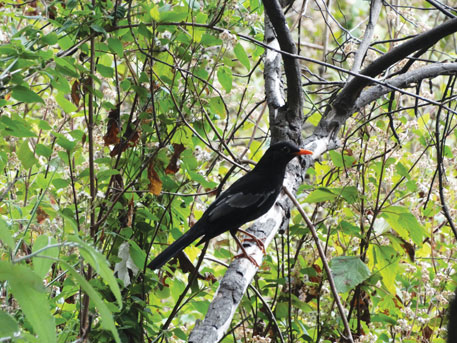 Camp participants are trained in the science of birdwatching, exposed to skills such as identification of bird calls, photography, nature-guiding and importantly, the ethics of nature-based tourism. Lectures, slideshows and freewheeling discussions on related issues add to the energy and effectiveness of these camps.

Since 2012, these camps have trained 440 people, including 86 professional guides, 192 forest guards, 59 hoteliers and 37 students. Additionally, in February 2014, the first ever Uttarakhand Bird Festival was organised at Asan Conservation Reserve near Dehradun, which was attended by 1,200 people. Large numbers of school and college students, tourism professionals, guides, amateur photographers and foresters attended the bird-walks, workshops, exhibitions and cultural programmes organised during the unique event. It also turned out to be an important networking opportunity for professional birders, tourism professionals and guides and exposed fresh recruits to the pleasures of birdwatching. This testifies to the growing popularity of birdwatching both as a hobby and a profession.

The success of the Bird Festival has now encouraged the Ecotourism Wing to organise the festival every year in the different locations so that more and more birding sites can be brought into the limelight and local enterprises can be encouraged. Every birdwatching camp has its own unique ambience and biological thrills. The one at Mahesh Khan was no different. Located at about one-and-a-half hour’s drive from Kathgodam railway station, the reserve forest harbours dense baanj oak (Quercus leucotrichophora) and pine (Pinus roxburghii) forests that are typical of altitudes between 1,700 m and 2,200 m. 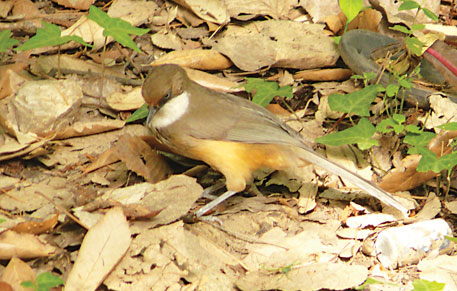 Baanj oak forest, an endangered and vulnerable forest, has been fragmented and degradated due to infrastructure development, land-use change, overextraction and unsustainable tourism. Yet it harbours many rare and habitat-restricted bird species such as the white-browed shrike babbler and white-throated laughing thrush, the maroon oriole, blue-winged minla, black-faced warbler, mountain bulbul, rufous-bellied niltava, striated laughing thrush, tickell’s thrush and collared owlet. The highlight of the camp was spotting the brown wood owl, which is a cryptic species and is rarely seen. The campers sighted another rare bird—the golden birdwing butterfly. These species require high-quality oak forest to survive. Their sightings indicate that the Mahesh Khan forest offers good habitat to birds.

Most of the people participating in the programme were from remote villages and work with rural tourism enterprises. The camp offered them exposure to the diverse set of people who had come to the camp either as trainers or speakers. There were Pratap Singh, an ornithologist and forest officer, specialising in bird calls; Mohit Agarwal, owner of Uttarakhand’s first birding lodge at Pangot; Deepak Rawat, managing director of Kumaon Mandal Vikas Nigam and Sujit Banerjee, chair of World Tourism and Travel Council. I used my experience to encourage observation of bird behaviours, such as courtship, cooperative hunting, nesting, feeding and territoriality, rather than simply creating lists of birds. There were workshop sessions devoted to the practice, ethics and best practices of nature guiding. 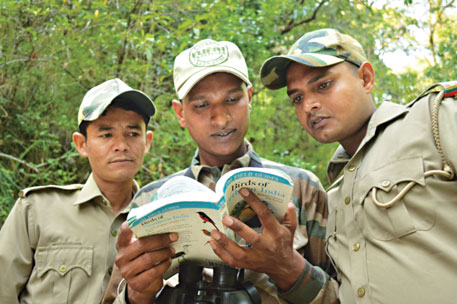 Such gatherings often bring in serendipitous learning and possibilities. Rawat of Kumaon Mandal Vikas Nigam, which has 48 resorts all over Kumaon, announced a new scheme to begin guided bird-walks at every resort. This is likely to bring in immense employment opportunities for well-trained local guides during the next few years.

Bhartari had realised early on that biodiversity conservation in the hills can be successful only with the synergistic involvement of rural people, forest department and tourism enterprises. He carved out a niche for ecotourism over the years through creating a separate budget for nature-based tourism and a large constituency of local people who look forward to the training opportunities afforded by the camps.

Now the programme faces a set of second-generation problems. Says Bhartari, “The new challenge in expanding the camps is creating a sustainable source of financing. At present, the expenses are met through small grants from the Ecotourism Wing. Additional financing is also required to provide binoculars and field guides to all local guides who have attained a certain degree of proficiency. Without such basic equipment, the skills would be lost somewhere along the way. We also wish to encourage more women to take up guiding as a profession.”

Other administrative hurdles are creating a formal licensing system so that qualified guides in established resorts are given access to forest reserves and sanctuaries for taking tourists on treks. There is also a need to reinforce ethical, practical and scientific skills among the guides to help improve their quality. 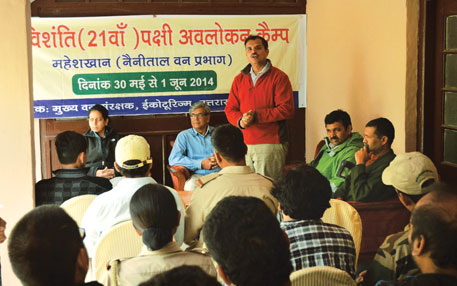 Expansion of rural tourism has also brought its own set of problems, which includes solid waste management, energy wastage and water conservation. The problems will aggravate with more tourists from cities visiting remote areas. The Ecotourism Wing has just begun tackling these issues and is developing a comprehensive policy on this with the help of environmentally conscious tourism enterprises.

In the quest for expanding bird-based tourism, the Ecotourism Wing has had the unstinting support of Uttarakhand-based NGOs, government and tourism enterprises, including Titli Trust, WWF, Wildlife Institute of India, Uttarakhand Council for Science and Technology, Jungle Lore Bird Lodge, Nature Science Initiative.

Several individual birdwatchers from cities also willingly spare time for training, event organisation and publication of educational materials for the camps. The Uttarakhand Forest Department has the policy of encouraging wildlife researchers who can study birds and other organisms and create a body of knowledge on the ecosystems located all along the altitudinal gradient from subtropical forests to the alpine ecosystems. Such knowledge can further feed into tourism and educational activities and provide material for books and pamphlets to popularise nature.

Being the first state in India to institutionalise bird-based tourism, Uttarakhand truly has something to be proud about.