Despite heavy deployment of police, Veerappan has remained elusive. The Special Task Force used the ugliest tactics to track him down, but failed 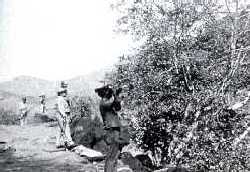 an elephant poacher-turned-sandalwood smuggler, Veerappan has used his intimate knowledge of the territory and his influence and terror among the locals to avoid capture. Over the years he has extracted a heavy price from the state of Karnataka. Crores of rupees have been spent, and 32 police personnel and 10 forest officers have lost their lives, apart from 77 locals.

Seen as a sort of hero by villagers and tribals of the area, he hasn't spared even them when he thought it was necessary. Suspected police informers and competitors have been ruthlessly eliminated, as have police parties. Even police stations were not safe: he attacked the Ramapura police station in May 1992.

Initially operating in a 6,000 sq km area that encompassed thickly wooded forests of the two states, Veerappan had increased his area of operation by another 2,000 sq km. Police estimates that he has killed about 2,000 elephants and has smuggled sandalwood worth around Rs 100 crore out of the jungles. While this claim is disputed by many, most agree that this killer's reign must end. "If a man has amassed Rs 100 crore, why should he live the life of desperado? Iwould imagine that he would buy himself a new identity and live a comfortable life,"opines Rajgopal.

"Serious efforts to nab Veerappan began in May 1990, with the formation of the stf , after he had ambushed a police party and killed three police sub-inspectors on the Gopinatham-Hogenekal road," says T Madiyal, the current additional director-general police (law & order), Karnataka.

Madiyal had been chief of the Karnataka stf between June 1991 and December 1992. The stf has its headquarters at Mahadeshwara Malai Hills (M M Hills), which is in Kollegal taluka . Veerappan's village, Gopinatham, is around 45 km from M M Hills.


By the time the stf was set up, Veerappan had already killed one regional forest officer, four forest watchers, three members of the public, at least seven other poachers and three sub-inspectors. The stf was involved in a number of raids on Veerappan's hideouts, and seized elephant tusks and sandalwood. They also 'arrested' a number of his gang members. The last claim is disputed by people in the area, who say that many of these arrests and 'encounters' were fake, and innocent villagers were killed to make the police records look respectable.

The stf operations peaked in the 1993-95 period, when Walter Devaram and S M Biduri headed the stf in Tamil Nadu and Karnataka, respectively. Five companies of the Border Security Force were also sent into the jungles to assist stf in apprehending the brigand. Nothing worked. "The stf used a counter-terror tactic on the villagers. On the one hand, the villagers were scared of Veerappan's wrath, and on the other, the police were terrorising them, booking even suspects under the Terrorist and Disruptive Activities Act ( tada )," says V Jayaprakash, Nakkheeran reporter at Hosur. According to him, there were several instances of rape as well in this period.

He adds that Veerappan was aware of police excesses and often killed policemen who were supposed to be involved in these excesses, thereby adding to the legion of supporters among the local people. Jayaprakash has interviewed several villagers who are on record on film. Since the revelations of the tape are startling, Jayaprakash has been lying low, fearing repercussions.

But how has Veerappan evaded arrest despite such heavy deployment of forces? T Madiyal refutes charges that the stf has been incompetent. "Veerappan has been in the forests since his childhood. He doesn't need the logistic support that a fully-equipped force such as the stf needs. He doesn't stay at one place more than once, and he knows all the forest tracks and routes. There have been some instances in the past when he has had a close shave with the stf . But, realistically speaking, only a chance encounter would be successful."


While admitting that Veerappan's information network is far superior to that of the police, Madiyal says that Veerappan terror amongst villagers in the area has prevented the police from getting information about him. "These forests have hamlets of 6-8 huts. Even if the villagers choose to inform the police, it would take a few days to reach the police. Veerappan would be gone by the time our forces reached the spot. And later, he would take out his wrath on the entire settlement if necessary."

This is partially true. In 1993-94, at the height of the stf operations against Veerappan, he decapitated two in Nullur village. He had suspected them to be police informers. This village is less than 6 km from the large stf camp at Naal Road.

But people like Rajgopal point out that the terror tactics were used more by the police. "Police atrocities (see box: Inquiries of a citizen ) far exceeded what Veerappan did. While he targeted suspected informers, the police used an almost scorched earth approach," he says.

"Veerappan has harmed the forests and its wildlife to a very large extent," states Madiyal. "When a poacher is credited with having killed over 2,000 tuskers, you can well imagine the damage he has caused." Ironically, Veerappan's presence in the forests has saved it to a certain extent from the consequences of mining. In Kollegal taluka , Mysore district, the government has suspended granite mining, after Veerappan's gang attacked one mine depot and took away the explosives. These he used against the stf , and with deadly effect. Granite from this area is considered to be of an extremely high quality.

While Baig admits that "the strategy adopted was probably not proper," he refuses to comment on the alleged stf excesses in the villages and hamlets of the area. The period 1993-94 saw the stf on maximum offensive. Reports of large-scale detention under tada , a counter-terror tactic adopted by the stf , and killing locals in false encounters were reported to be the order of the day. "These are only allegations," insists Baig. When reminded that Nullur village, some 60-65 km from Kollegal (see map: The badlands ) had been abandoned by terrified villagers after the alleged atrocities by the stf at their peak, Baig responded by saying that 'no such village' had been abandoned.

B K Dikshit, deputy conservator of forests, Kollegal division, insists that the recent hostage drama did not have an adverse effect on the working of his people. "It is not likely that Veerappan can afford to antagonise the average villager beyond a point. He depends on them for his rations, protection and also information. If he upsets them by constantly terrorising them, he would lose his support base and alienate himself," states Dikshit.

According to Dikshit, those under possible threat are senior-level forest officers, who are posted to the area for a limited duration and most often are not from the area. "They have to keep their movements secret," he says. Though Dikshit says that this does not undermine their efficacy, it is hard to imagine how the forest department officers can carry out their regular work under such circumstances.

Director-General of Karnataka police, T Srinivasulu, did not wish to comment on the issue. Other senior officers at the Karnataka police headquarters in Bangalore said that it is not surprising that a brigand can get away for so long. "Look at the dacoit gangs in Uttar Pradesh and the Chambal. They too had evaded the police for 20-30 years. And here, our men were in a jungle area, alien territory for them." They add that the Veerappan phenomenon is a media creation.

"Humbug," says a Mysore-based journalist, who has been covering the issue for a long time. "No other criminal, be it a smuggler, poacher or dacoit, has been such a persistent thorn in the flesh for the police. His deeds or misdeeds haven't been created by anyone but himself. What prompts the police to react in such a manner, is their inability to get him."

"While it is certainly not impossible to catch a fugitive in the forests, it is extremely difficult," says Dikshit. "Veerappan and his men are from these hills. At least two generations of their forefathers have roamed these forests and they have grown here. They belong to the 50,000-odd settlers in Kollegal division, and can mingle and mix with them," he adds. M K Srivastava, currently deputy inspector-general of police (planning research and special units), Karnataka, who had headed the Karnataka stf for a year, from June 1996 to May 1997, agrees.

The more adventurous police officers are of the opinion that this exercise started off on the wrong note. "We have this penchant for grandeur and make a big deal of whatever we do. Instead of having such a large force announced to the world, we should have had a small, carefully selected band that would seek out Veerappan and flush him out of the forests." Another is of the opinion that the government could have placed a price on Veerappan's head. "That may have induced a gang member to act on his own, to claim the reward."


Alexander says that Veerappan has probably reached the end of his tether, and cannot continue the life of a desperado for much longer. "Even locals have voiced dissatisfaction over the state of affairs. They realise that they are in almost a war zone because of Veerappan and would like this situation to end," he says.

In Nullur village, P G Thangavelu, a village youth with four charges under the tada , says that he for one, would be relieved when Veerappan surrenders, and the drama ends. "We have come under tremendous threat from two sides." But he thinks that Veerappan will not surrender, but will have to be brought down (see box: Victims of circumstance ).

Kalimuthu says that there is conclusive evidence that the man is suffering from asthma and some other persistent ailments. "Even if he continues to evade us, that cannot be for too long. He will fall some day."

However, Rajgopal disagrees with these theories. According to him, Veerappan wanted to surrender in 1993, and was willing to serve a 20-year sentence then. "But Walter Devaram, who was heading the tn stf , wanted to kill Veerappan and turned down the offer," says Rajgopal.