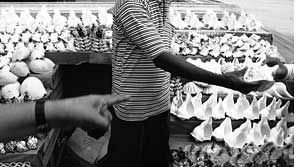 Walking down a beach in Kanyakumari we noticed a stall cobbled together with tables of various heights. A man was calling out loud, trying to interest us in his wares. Sea shells. Journalists on an environmental course, we had taken a little time off to enjoy the beach. A shell seemed a quaint memento to take back home. Some of us decided to stop by. Only to be stopped by Deepak Samuel. A marine biologist, Deepak, had accompanied us to the beach. He whispered some of the shells were protected under the wildlife protection act. We wanted to know which ones were. But he didnt want us to make our actions obvious we might alert the hawker.

Seeing he had a determined lot to contend with, Deepak picked four different species. Even as he was explaining there are several schedules giving different levels of protection to animals, a journalist among us argued they were shells, not animals.The question seemed a little impertinent considering just a few hours ago Deepak had given us a talk on gastropods molluscs which snuggle in a shell which they themselves secrete. We had seen how a crab had been living in an empty gastropod shell.

But there was still a disconnect between the animal and the clean, shiny shell. A discussion ensued where Deepak and his colleague, Patterson Edward, explained how shells are in fact the animals skeleton. The shell is made of calcium carbonate with patterns and shapes unique to the species. Usually, they are twisted to the left or right. When the shells are collected, they more often than not have the animal living in them. So the creature is killed, the shell cleaned and sold to tourists. The shells are treated with acidsusually hydrochloric acid of varying concentrationto remove the fibres on its inner surface. Some also boil the animal to kill it and remove the soft body parts.

Many of us were not convinced yet. Buying one shell wasnt going to make a difference; and in any case, the animal was dead and gone. The shells were beautiful. Thats when Deepak drew us into a talk about wildlife trade. Its all about supply and demand as long as people are willing to buy shells there will always be people ready to collect and sell shells. The hawker we buy from will no doubt tell his fisher contacts which species are being bought by tourists and so they will look to collect more of those species. We later met a fishermen who told us that a left-handed conch, where the opening is on the left side, can fetch even Rs 1 lakh.

Some of us still bought shells but not before checking with the marine biologist if they were protected species. We just wanted to avoid trouble possession of schedule shells could land one in prison for a maximum of seven years. Nevertheless one of us did get into a spot of trouble; he had radioactive sand with him. The security at Tuticorin airport were suspicious of the little packets of sand he had in his luggage. Perhaps, they mistook it for drugs.

He had bought a variety of shells and a couple of packets of sand from Kanyakumari. They let him go after he explained it was just a souvenir.