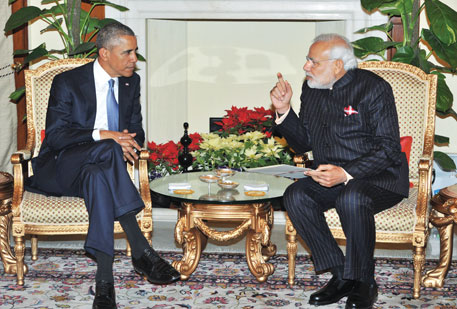 THE CIVIL nuclear energy cooperation agreement between India and the US, announced on January 25, was hailed as the highlight of the US President Barack Obama’s recently concluded visit. Although former prime minister of India Manmohan Singh and then US president George Bush had signed a landmark civilian nuclear deal in 2008, the two countries could not do business because the US did not agree to subject its companies to India’s liability laws in case of an accident. It also insisted on keeping a tab on nuclear materials supplied. The new agreement has taken care of US concerns but compromised those of India.

After the 2008 deal, India passed the Civil Liability for Nuclear Damage Act (CLNDA), 2010, which held suppliers liable for compensation in case of any accident caused by faulty equipment and gave the operator (the government) the right to sue them. This is the law which nuclear fuel suppliers, especially from the US and France, have been fiercely opposed to.

To come out of the logjam, India has now offered to set up Indian Nuclear Insurance Pool of Rs 1,500 crore. This would indemnify suppliers and ensure that American companies enter the market without being held liable for compensation. The Government of India and national insurance companies will contribute Rs 750 crore each to the pool. General Insurance Corporation of India (GIC), a 100 per cent government-owned company, has been made the administrator of the pool. It is trying to approach private bankers to garner the money. It is also planning to issue insurance-linked bonds to tap new funding sources. When contacted, Y Ramulu, deputy general manager of GIC, said the company was also trying to arrange for the Rs 750 crore the Government of India was supposed to provide. But he did not say why was GIC doing so.

What the government is contemplating is a serious deviation from CLNDA, says E A S Sarma, former secretary, Government of India. Instead of holding a company responsible for an accident, the government is taking the liability on itself. A sovereign guarantee or an insurance cover by a state-owned statutory insurance company or a bond cover provided by a state-owned financial institution would be equivalent to the state bearing that liability, said Sarma in a letter on January 24 to Finance Minister Arun Jaitely. This is exactly what CLNDA had tried to avoid. Since the Government of India or its companies will be the insurer and the operator of the nuclear power plants, the liability in case of an accident will be, in effect, borne by the Indian taxpayer, says Jaideep Prabhu of Cambridge Judge Business School, University of Cambridge, who writes on nuclear energy. This government decision also violates the polluter pays principle emphasised several times by the Supreme Court, adds Sarma.

In an announcement on February 8, the Ministry of External Affairs tried to assuage fears about the government giving up the right to sue the supplier. The announcement said that even after the new agreement, “It is open for the operator and the supplier to agree on the terms of their contract relying on the applicable law.” But this still is a deviation from CLNDA because Section 17 of the Act clearly gives the government the right to sue.

Apart from taking the burden of liability on itself, the government decision has another problem—the figure of Rs 1,500 crore is a gross underestimation of the damages a nuclear accident can have. Section 6 of CLNDA had put the compensation cap at $300 million (over Rs 1,800 crore). But this figure, which too was an underestimation, was calculated before the March 2011 Fukushima nuclear accident in Japan. A study has put the monetary impact of the Fukushima disaster at 11.08 trillion yen (over Rs 22 trillion). This study was done by Kenichi Oshima, professor of environmental economics at Ritsumeikan University, and Masafumi Yokemoto, professor of environmental policy at the University of Osaka, both in Japan. They calculated costs based on information disclosed by the Japanese government and Tokyo Electric Power, the operator of the plant.

“Given these figures, a pool of Rs 1,500 crore is insignificant,” says M V Ramana, a scientist at the Nuclear Futures Laboratory and Program on Science and Global Security, Woodrow Wilson School of Public and International Affairs, Princeton University. In the BP oil spill disaster, the US government received a compensation of $20 billion (over Rs 120,000 crore) from the oil giant.

The policy situation in Japan is similar to India’s. It does not have a supplier liability law. Therefore, despite reports by experts and the Japanese government saying that the disaster was caused due to design flaws in reactors, the Japanese taxpayer has paid the price. General Electric (GE), the US company that designed and constructed the nuclear site, has not paid anything. GE is one of the companies interested in doing nuclear business in India and was reluctant because of the liability law. Experts say the hesitation on the part of such companies to accept liability on account of design deficiency raises doubts over the safety features they will provide to reactors.

It is being argued that the Indian government is following the Canadian example on nuclear liability laws. But the liability provided in Canada’s Nuclear Liability and Compensation Act, passed on November 7, 2014, is much higher and increases with the passage of time. The Act provides for an increase in liability from Canadian $650 million (about Rs 3,200 crore) if a nuclear accident occurs within one year of the Act coming into force and Canadian $1 billion (about Rs 5,000 crore) if the incident arises after the third year. In India, the operator’s liability is fixed at Rs 1,500 crore.

Other than the miniscule compensation, the announcements made by the government suggest it is willing to give up the right to sue a US supplier for damages. However, it is to be seen how this assurance stands in Indian courts because it violates the Indian Contract Act (1872).

Experts say the government’s decision to invest in nuclear power is illogical because solar and wind energy options are better, cheaper and safe. According to a report by think-tank Bridge to India, electricity from these sources would cost Rs 8 and Rs 4.5 per unit respectively while that from the nuclear reactors will cost Rs 12. Ramana sums up the issue when he says, “Though the existing law is to protect civilians, it appears the government is more interested in protecting multinational corporations.”