The Indian auto industry has got stuck with obsolete engines. It needs a jump-start 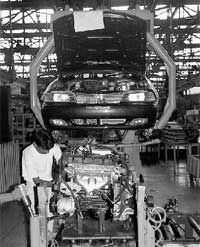 It's the core issue and it's also one part of the vehicle the auto sector refuses to think about or invest in -- the engine. No wonder grp found the engines in most vehicles, across all three segments, falling far behind the best available. grp searched hard, analysing numerous characteristics of the engines rated but could not find the Indian automakers passing the test on any count. What grp did notice was the automotive industry's sleight of hand -- they prefer to make cosmetic changes for visible and immediate results, spend on introducing snazzier models and just meet the emission norms rather than strike at the heart of the problem.

The simple reason for this is not a shortage of money but a lack of commitment towards improving engine technology. The companies are unwilling to invest in the engine, as they are able to get away by investing in things like pollution control devices. And there is little indigenous research and development, either by the industry or the government for the sector to depend upon. The consequences for the industry are the poor grp report card they have to show to their customers (see graph: Poor performance... )

The general conclusion that an average vehicle owner can draw from the grp rating is that the engine he revs up is technologically a decade behind the best. And it is not only the owner who suffers. While he may not enjoy the zip in his drive the entire society ends up coughing and wheezing because the auto sector will not do its due and go for the best -- increased pollution is the price the country pays for the sector's follies.
One need take only a single look at the engine design of various vehicles studied during the rating and compare their performance on numerous parameters to realise that the West has outmanoeuvred the Indian auto sector by a mile (see box: Global vs local) .

Considering how important it is, one would believe that at least on this count the industry would try to keep up with the world leaders. That is not the story though. Today, the best compression ratio achieved across the world is 10.5 for petrol vehicles and 16 for diesel. However, the Indian auto sector lags behind -- the average compression ratio of petrol passenger car remains stuck at 9.0 and that of diesel cars at a high of 21.5. The industry is aware that though the figure may look as a minor difference to the uninitiated, the difference is large enough to establish a technology differential of a decade. The story of multiutility vehicles too is the same. The high average compression ratio of 21.7 recorded in the segment is today considered obsolete.And this is not the only parameter where the engines that drive Indian vehicles end up losing the race. Consider the case of the two-wheeler segment. It is flooded with models using two-stroke engine technology, whereas the debate about four-stroke engines being better than two-stroke engines is considered dead today. The four-stroke engine, may be an expensive proposition but is definitely less polluting.

Better than both, the two-stroke and the four-stroke fossil-fuel-based vehicles, are the electric driven ones. But, despite the fact that electric vehicles have zero tail-pipe emissions, they are a rare sight on Indian roads. The only electric vehicle on road is the three-wheeler produced by the Scooters India Limited, which uses electric drive. While across the West automobile industry is experimenting to cross the Rubicon of fossil fuel- paradigm, the Indian industry continues to struggle to get its two-wheeler fleet on to four stroke (see: Changing gears on p47) and its four-wheelers on to just the next best possible (though obsolete) alternatives.

While some fault may lie with multinational players who refuse to bring the best to the country, deluging it with the discards of the West (see: Taking India for a ride on p49), the Indian giants too are to blame. Little investment is made to modify or develop technology that can suit the Indian conditions (see box: Whither research ).

If the automobile sector wishes to redeem itself and make a better show during the grp review two years later, it has a lot of catching up to do. Increased public disclosure about the policies and technologies by social audits such as grp are bound to raise the awareness to the levels where the industry will truly have to be accountable to the people it earns its millions from.