Exploring the spirit of Indian science

Two interesting congresses to be held soon will focus on indigenous science and technology. Another programme, launched recently in the Capital, is taking scientific concepts to the people and aims to promote awareness of scientific issues

Exploring the spirit of Indian science 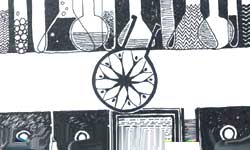 SOME interesting programmes on indigenous science and technology are lined up in the coming months in various parts of the country.

The Bharat Jan Vigyan Jatha-92, inaugurated in New Delhi on Gandhi Jayanti (Oct 2), will continue till National Science Day, February 28. The objective is to involve voluntary groups, social organisations, educational institutions and individuals in mass actions to promote national awareness of scientific issues. Its specific themes will relate to health, water, environment, superstition and the scientific temper and appropriate technology for domestic, industrial, agricultural and other applications.

In November, the Swadeshi Science Expo-92 will be held in Thiruvananthapuram. It has been planned as a response to criticism that though the country has pursued an independent science-and-technology policy, it has yet to achieve economic or scientific self-reliance. The organisers strongly support the view that India should develop technologies and make its industry more competitive so it can solve natural problems by using indigenous technology and research.

The Second Swadeshi Science Congress, to be held simultaneously with Expo, is being organised with these objectives in mind. Scientists, technologists, researchers and students are expected to make presentations and about 300 delegates from various research institutions are expected to participate in the deliberations.

An exhibition organised at the congress will highlight the progress of science and technology in independent India and the scientific aspects of rural development. There will also be an exposition of the country's scientific heritage, in which leading public-sector undertakings and research institutions will exhibit their research projects, technologies and products. Traditional artisans from various states will display their skills.

A Congress on the Traditional Sciences and Technologies of India is being organised by the Patriotic and Pupil-oriented Science and Technology Foundation (PPST Foundation) in Madras, in collaboration with the Centre for Technology Alternatives for Rural Areas of the Indian Institute of Technology in Bombay. The congress, to be held at IIT, Bombay, from May 27 to May 31, will be the first of its kind. Several agencies and individuals from all over the country are expected to participate.

C N Krishnan, director of the PPST Foundation, says the congress will project only a cross-section of the country's traditional science and technology, because the scope of the theme would otherwise be much too vast. It will highlight those areas of traditional science and technology that are thriving, that are stagnating and that would be of immense use to the country if they could be introduced.

The congress aims to increase interaction among those involved in modern science and technology so that optimum use is made of both. The congress is expected to enhance the value of these disciplines in the popular mind and encourage the government's active patronage.