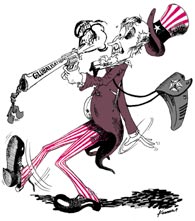 Picturesque Santa Monica, located in California and known for its palm tree-lined boulevards, has of late been dug up by ungainly drilling rigs. At one level, the intensive boring operations are seeking to trace potential carcinogen methyl tertiary butyl ether (mtbe) that has seeped from underground petrol storage tanks into the us state's aquifers. At another, they are gnawing at the very foundation of nafta (the North American Free Trade Agreement).

The mtbe controversy has snowballed into a full-blown legal battle between the us and Canadian company Methanex Corporation. The latter has sued the state of California contending that the ban on the pollutant has hurt its business. Several countries have been keeping close watch on the case since its outcome is likely to determine how the emerging global investment regime will affect the autonomy of regional and local governments to legislate against polluting businesses.

In this regard, the recent preliminary judgement of the three-member nafta trade tribunal has done little to allay fears. Critics allege that even as the decision may have thwarted Methanex -- the Vancouver-based methanol manufacturer -- it has left the door ajar for a flurry of fresh cases challenging the sovereign right to control polluting activities and protect natural resources from exploitation.
In several states across the us, mtbe is blended with petrol to improve fuel combustion. The California administration found traces of mtbe in the groundwater in 1997, and asked the University of California to investigate the effects of the fuel additive on health. Finding it to be a potential carcinogen, the state moved to prohibit its use. In December 1999, state governor Gray Davis ordered the phasing out of mtbe by December 31, 2002. The oxidant was to be replaced with ethanol, more than 70 per cent of which is supplied by California-based Archer Daniels Midland Company.

The decision impacted Methanex -- till then the main supplier of methanol for producing mtbe-- the hardest. Consequently, the company appealed to the nafta tribunal seeking redress. It put forward the following arguments against the ban: one, that the order lacked substantive fairness; two, that mtbe was only a symptom and not the cause of the problem (leaking tanks and poor maintenance were to blame) and three, that it was too draconian a measure to protect any legitimate public interest. Methanex pleaded for more than us $1 billion as compensation. Its justification: the us had failed to treat the company fairly and equitably (as provided by article 1005 of nafta). The company also claimed that the move would bring the business of Methanex-us to a grinding halt, forcing it to shut down its plant.

In an amended claim in 2000, Methanex levelled a veiled allegation that Davis had sought to favour the California-based ethanol industry which had made political donations to his campaign.

The us government then went on the offensive. It put forth several arguments in support of its claim that the nafta tribunal had no jurisdiction to listen to the appeal. It sought to play on the phraseology of the nafta regulations. If it could be argued that the measures in question were not "related to" Methanex, the dispute would fall outside the purview of a nafta tribunal. The exact definition of 'related' is quite ambiguous, point out critics.

It is ironical that the us sought refuge in this technical loophole instead of taking a stand with an ethical underpinning. The country argued that Methanex was not a directly affected party as the company merely supplied a component of the fuel additive. The tribunal dismissed all but this argument, concurring that there was no "legally significant connection" between the measures taken and the investor affected. But it ruled that a fresh plea by Methanex, based solely on evidence alleging that the decision to ban mtbe was intentionally discriminatory, could be still be admitted.

Significantly, the tribunal is yet to touch upon the crux of the issue -- whether to compensate Methanex or not.
The question of primacy of environmental and social concerns over business interest has also remained unanswered in the dispute. In fact, some critics feel the issue has been sidestepped.

Lori Wallach, director of Public Citizen's Global Trade Watch, a us-based liberal non-governmental organisation (ngo), says: "While the tribunal did not award Methanex the compensation it demanded, it also failed to uphold California's right to safeguard its water." Wallach adds: "We have predicted for a year that the panel would throw out the case in the name of political expediency to prevent it from boomeranging against nafta."

The Methanex case has become a rallying point for all those protesting the Free Trade Area of the Americas (ftaa) -- the world's largest trading bloc, slated to be finalised by 2005. ftaa would incorporate 34 countries and stretch from Prudhoe Bay in Alaska to Patagonia in Argentina. Business interests have deemed finalisation of the pact a necessity for us President George W Bush. The Methanex case actually made Bush's task of securing special trade negotiation powers from the senate that much tougher. These are essential for him to steamroll provincial and regional considerations while inking the pact.

Like many other environmentalists, Wallach believes that "the panel succumbed to political pressure (from the Bush administration) and sent a wrong signal by not disposing of the entire case". The activists ' perception is that the narrow technical basis on which the case was decided is especially alarming. "The panel's preliminary ruling implies that if Methanex had produced mtbe itself, it may already have won this outrageous case," says Wallach.

Wallach cautions that while the us may have fended off Methanex on one pretext or the other, under ftaa it would be tough for developing nations to keep large businesses off their natural resources. Mexico was the first developing nation to pay dearly for protecting its environment against business interests (see box: At the receiving end). "Could a developing country stand up to a timber giant wanting to plunder the rain forest?" asks Mary Bottari, also of Public Citizen's Global Trade Watch. "The mere threat of a vast damage award could make poorer nations give up even before the fight begins."

Stephen Canner, vice-president of the us Council on International Business, reflects the industry's view: "(nafta provides that) if an asset or investment is appropriated, a government has to foot the bill." Segundo Mercado-Llorens, a Washington-based labour lobbyist, however, says: "No one thought this provision would be used to invalidate our environmental laws." David Schorr, director of World Wide Fund for Nature's Sustainable Commerce Programme, feels that the industry is turning the polluter-pays principle on its head. "Methanex and other investors claim that nafta requires governments to pay polluters not to pollute," observes Schorr.

What has also irked civil society groups is the fact that tribunal meetings are being shielded from public gaze. They are modelled after private commercial arbitrations with no avenues for the public to participate, they lament. "Serious questions of public policy and constitutional law are being decided in secret," says David Waskow, trade director at Friends of the Earth, a us-based ngo. "These nafta provisions are heavily slanted in favour of multinational corporations, while shutting out ordinary citizens and local communities," adds Waskow. Sadly, the case that is redrawing the frontlines in the battle against globalisation is being fought behind closed doors,.

Controversies similar to the one in which two developed nations are embroiled today could grip several developing countries in the future if a global multilateral agreement on investments comes into force.