Several voluntary agencies are working to provide greater control over natural resource use. 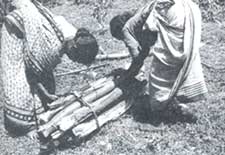 WOMEN are the worst victims of environmental degradation. A number of voluntary organisations now realise the crucial linkages between women and the environment and that only by empowering rural women so they have greater control over natural resources can they have better control of their own lives.

THE WOMEN of Chipko fame, who hugged trees to prevent them from being axed, are now implementing afforestation and development work through mahila mangal dals (MMDs), which have been set up by the Dasholi Gram Swarajya Mandal in UP's Chamoli district. An MMD consists of a woman member from each village household and it is expected to gradually take control of the village's community lands. The MMD protects these lands by formulating and enforcing strict forest protection laws, by planting trees and by regulating the distribution of fodder and wood to each family for domestic use.

IN THE tribal belt of West Bengal's Bankura district, the landless survived by migrating to neighbouring areas to work as daily-wage labourers. In 1980, the Centre for Women's Development Studies, New Delhi, launched an International Labour Organisation-funded project aimed at organising mahila samitis (women's societies) that would attempt to create employment opportunities through reclamation of wastelands donated by private landowners.

The women reclaimed such land by planting arjuna (myrtle) and asan (laurel) trees, which also allowed them to rear tussore silkworms. Other profitable activities include processing tussore cocoons, livestock rearing and manufacturing sal leaf-cups and plates with polythene lining. The group's objective from the very outset has been to increase the role of women in the development process, through collective action.

The experience of the People's Education and Development Organisation (PEDO) in Bicchiwara block of Dungarpur district, Rajasthan, is that any work of environmental regeneration involving women has to address the problem of their disadvantaged social position and gender-based social and property relationships.

In this predominantly Bhil tribal area, the subsistence economy based on rainfed agriculture on terraced hills is on the verge of collapse due to deforestation. Chandrika Sharma and Madhu Sarin of PEDO started work with the women by promoting chulhas (stoves) and weaving looms and training them as chulha mistris (stove repairers). The drought years of 1985-87 brought home to the women and to PEDO the need for a broad programme involving the planting of fuel trees and fodder and fruit plants to regenerate degraded private and common lands.

SARTHI (Social Action with Rural and Tribal Inhabitants of India) reports broadly similar experiences in working with poor, rural women in the backward Panchmahals district of Gujarat. Starting in 1983 with an improved chulha project, SARTHI volunteers moved on to developing private and common wastelands. Today, SARTHI is working on 118 ha of revenue and common grazing land in nine villages through nine women's groups involving 250 members.