Amid murder of an activist, 4,000 missing ponds and 195 FIRs on encroachments in East Kolkata Wetlands, West Bengal mulls a wetland policy 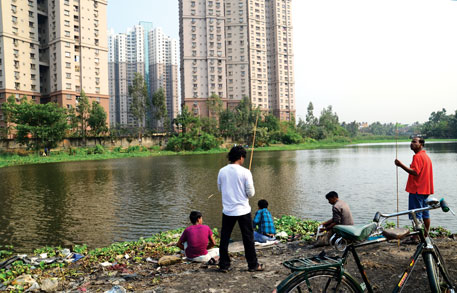 The composure on Pratima Dutta’s face defies what she has endured. Rummaging through a pile of photographs, she takes out one where a girl is walking through a lane submerged in rainwater mixed with sewage. The photograph was taken a few years ago by Pratima’s husband Tapan Dutta near their house. Tapan had meticulously collected evidence of how a consortium of contractors, Bengal Anmol South City Infrastructure Ltd, was illegally filling a 280-hectare (ha) wetland near Kolkata. Without the Joypur Beel, as the wetland is locally known, the low-lying habitations in Bali will face further submergence, Tapan made people understand. He gathered them, formed Bali-Jagacha Jalabhumi Bachao committee and filed a petition in the Calcutta High Court in 2009. Tapan was offered money and a flat to withdraw the case, but he refused. On May 6, 2011, Tapan was shot nine times. With his death, the petitioners fell silent except Pratima.

On January 14, 2013, the court, in its final judgement, allowed construction to continue in the wetland, despite findings by government bodies that the work being carried out is illegal. “It is a big project... cannot be stopped,” it said.

In 2011, following the court’s instructions, the West Bengal Pollution Control Board (WBPCB) filed an inspection report. The report states: “The entire area (Joypur Beel) appears to be low lying marshland with abundant aquatic vegetation… . The site has been exclusively filled with fly ash.” A high power committee, constituted by the high court, that visited the site in 2012 said, “The wetland has been serving major ecological functions for more than 100 years… as a natural reservoir of flood water and recharge (ing) the groundwater.” The district land and land reforms department had converted the land status of the project area from wetland on which any construction is illegal to agricultural land where construction can be done. The project is yet to take mandatory clearance from the State Environment Impact Assessment Authority or a consent to establish from the pollution control board, said the committee which was formed following a 2011 petition filed against encroachment on wetlands in the state. 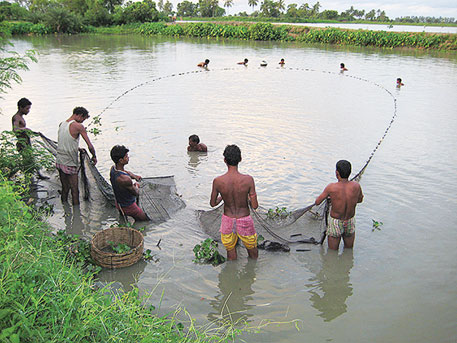 Although the high court has given its final verdict, Pratima has a long battle ahead. In the criminal case of her husband’s murder, she has moved high court, seeking a CBI inquiry. The state CID failed to investigate because of involvement of a state Cabinet minister among others, alleges Pratima who, along with her young daughters, lives under constant threats.

South City Infrastructure, a partner in the construction on Joypur Beel, is not new to encroaching on wetlands. Starting 2003, it constructed two 40 storey towers by filling 0.4 ha of Bikramgarh Jheel in the heart of Kolkata.

Witnessing the increase in encroachments, NGO Vasundhara approached WBPCB in January 2006. Three months later, WBPCB formed an independent committee to recommend corrective measures. The committee said two of the four towers be demolished and held IAS officers and WBPCB’s chief engineers responsible for giving permission to fill the wetland. The recommendations, however, were not implemented because of “considerable delay”. Over the years, Bikramgarh Jheel has reduced from six ha to three. “South City paved the way for more encroachment,” says Arjan Basu Roy of Nature Mates. The NGO has reclaimed portions of Bikramgarh Jheel with excavators. Ironically, South City builders and flat owners pitched in with funds.

Owing to encroachments, half of the city’s ponds have disappeared, points out Mohit Roy of Vasundhara and author of Old Mirrors: Traditional Ponds of Kolkata. In 2006, the National Atlas and Thematic Mapping Organization published a list of 8,736 ponds within the Kolkata municipal area. “But while mapping on Google earth, I could locate only 4,500 ponds,” says Roy.

South City Infrastructure did not give any response on the issue.

The 12,500 ha East Kolkata Wetlands (EKW) is the only Ramsar site (implying a wetland of international importance) in the state. Managed by statutory body East Kolkata Wetland Management Authority (EKWMA), EKW acts as the city’s kidneys. It consists of 250 sewage-fed fisheries and processes nearly 750 million litres of sewage daily. The treated water is used in aquaculture to produce 15,000 tonnes of fish per year and 150 tonnes of vegetables per day. “The key ecosystem service is provided by an interplay of wastewater, sunshine, algae, fish and the creative intervention of farmers.... as a result of this intervention pathogens within the wastewater get destroyed... the nutrients are entrapped by the algae in presence of abundant sunshine, and finally treated water is released to irrigate paddy fields,” writes Dhrubajyoti Ghosh in his book Ecology and Traditional Wetland practice: lessons from wastewater utilisation in the East Calcutta Wetlands. Ghosh is the former chief environment officer of West Bengal and an expert on wetlands. 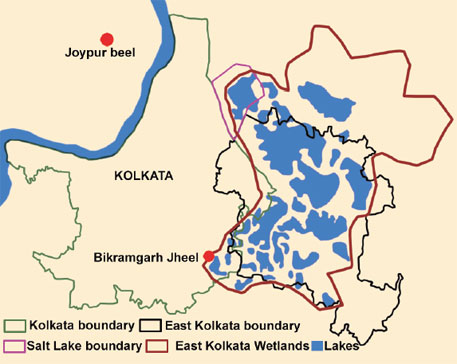 Despite their pivotal role, the wetlands are facing crisis. Since EKWMA’s inception in 2006, the authority has filed 195 FIRs and 25 stop-work notices against illegal land conversion and encroachments. On many occasions, the field staff was severely beaten during site inspection, says Bonani Kakkar, NGO member of EKWMA. The encroachments include educational institutes like Bengal Institute of Technology and Heritage Institute.

In August last year, EKWMA filed an FIR on a real estate project, Sabujayan, which is selling 100 plots in 8 ha. “Everyone wants a waterfront house with greenery. The real estate industry is providing exactly that at a steep price; the folly being there will neither be water nor any greenery left in a few years,” says a senior officer in the state environment department requesting anonymity.

The Salt Lake municipality and the New Town Kolkata Development Authority, meanwhile, are dumping solid waste in EKW after EKWMA turned down a request for a dumping facility last year. “Without political will, laws are ineffective in stopping the rapidity and rabidity with which wetlands are disappearing,” says Ghosh. It was during his tenure that EKW was notified under the Ramsar Convention. Sadly, says Ghosh, the Ramsar Convention has wide gaps, especially when it comes to monitoring infrastructure. For instance, EKWMA has only 16 staff members—all on contract—headed by an IFS officer. The mobility of the staff members is restricted as they only visit the field with police personnel.

When NGO Forum for Human, Legal and Ecological rights filed a petition against encroachment at the high court in 2011, it resulted in the constitution of the high-power committee to suggest remedial measures. “We wanted the court to act as wetlands were destroyed across West Bengal despite legal provisions. Tapan’s death was a wake up call,” says Kunal Guha Roy, general secretary of the NGO. Within weeks of its formation, the committee received 27 complaints. It visited Joypur Beel and other wetlands in April last year and submitted recommendations to the state chief secretary in August. 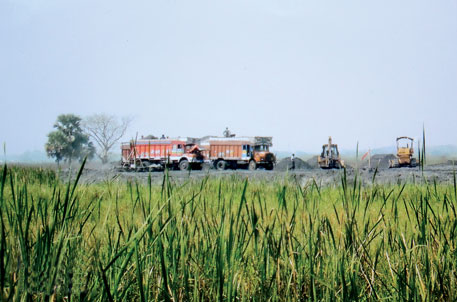 The recommendations, which are yet to be made public, include formation of a state-level management authority for wetland and other waterbodies, since the existing Acts and rules relating to wetland protection vest with different departments. As the records of wetlands are held by multiple authorities (land and land reforms department, fisheries department and municipal authorities), the committee recommends that the state environment department be charged with the assessment of status of any waterbody in case of any inconsistency in the records held by different departments.

Among its other recommendations are a “monthly action taken report” against filling of wetlands from district authorities to be sent to the state-level authority, and preparing a detailed inventory of wetland and waterbodies in every district. In accordance with the Inland fisheries Act, all wetlands illegally filled up in the last five years are to be restored, suggests the high-power committee. In spirit of the Forest Rights Act of 2006, the committee recommends legal entitlements to those dependent on the waterbodies.

A draft state wetlands policy on similar lines was submitted to the state government in July 2012. But nothing has moved since then.

Guha Roy puts it succinctly: “West Bengal was an industrial cemetery for decades and now, real estate has emerged as the frontier sector. There is no political will to unsettle this cash cow.”