State is trying to get farmers to budget water 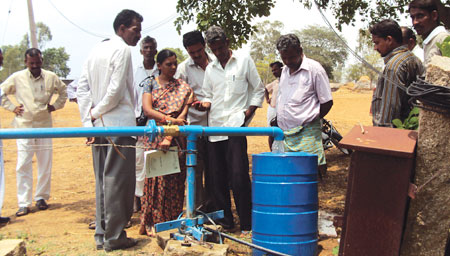 The million-odd users of groundwater in Andhra Pradesh need a new form of regulation, everybody agrees. The system based on permits—under WALTA—only adds to the transaction cost of farmers. The fact is there is a desperation to dig and then dig deeper.

There is no estimation how much the farmers—private entrepreneurs—of the state have invested into building the irrigation system. This investment is critical for farmers, but they must also ensure its sustainability. The state is beginning to look for new answers to the groundwater challenge: how can it involve the farmers—the individual decision makers—in taking better and informed decisions about this collective wealth, which is not easily seen or estimated?

In 1996, work began through the Dutch government-funded Andhra Pradesh wells project, which focused on funding farmers to drill borewells. The project linked the wells to building tanks in the village, promoting recharge. In 2004, the Food and Agriculture Organization (FAO)-funded Andhra Pradesh Farmer-Managed Groundwater System was launched. It looked at training farmers on understanding groundwater regimes and exploring how this learning could influence communities to change their use of groundwater by switching crops. In 2008, a World Bank-funded project started in collaboration with the groundwater department, with a tank component called AP Community Based Tank Management programme and a small component on groundwater called Participatory Groundwater Management.

T N Reddy of MANAGE, a non-profit in Hyderabad involved with the FAOfunded project, said it is important to get farmers to take note of the common water system. According to him, the FAO project was also aimed at explaining to farmers the seasonal changes and distribution of groundwater so that they estimate and use it accordingly. “But the project was limited in its spread and did not have the desired impact,” he said. His evaluation is that in the 600-odd villages covered under the project, roughly half the farmers changed their cropping patterns to less water-consuming crops. “There is a long way to go before we can improve groundwater levels across the state,” said Reddy. Groundwater irrigation is linked to what farmers can earn from crops. “You cannot expect farmers to shift crops or reduce their water consumption without providing alternatives or giving them market support,” said Palla Narendra of the Tata Institute of Social Sciences in Hyderabad.

In addition, the state is making investments under the Centre’s employment programme, NREGS. Between 2009 and 2010 the government undertook 850,000 works, of which 75 per cent were categorised under water conservation. These works included desilting of tanks, soil moisture conservation and construction of water harvesting structures. This investment should have improved groundwater regimes. But there is little evidence of that.

The problem is the lack of data. No government department takes charge of looking at the impact of the public works on the water system. C Suvarna, special commissioner in the state rural development department, explained, “Groundwater is a difficult issue. The state government has projects going on all over the state. But groundwater levels are falling. The departments involved with regulation, management or policymaking seem to be working piecemeal.”

The ongoing World Bank-funded project of the irrigation department requires the community to identify borewells that fall within the command area of the village’s biggest tank and record the groundwater level over a period of time. Under this project, spread mostly in dry and droughtaffected areas of the state, some 315 tanks were selected in 13 of the total 23 districts. These tanks fall under the 161 over exploited and critical groundwater basins in the state. Till July 2010, farmers in 20 per cent of the villages were discussing crop water budgeting after monitoring their groundwater for two years. “The actual change in cropping patterns has not yet been seen. But with debate, farmers’ awareness increases. This is the first step to the big change,” said Eswara Reddy, capacity building expert with the project.

The idea is catching on in Yavapur village in Medak district, some 100 km from the state capital. Here the project started in 2008 and villagers now record water levels every 15 days in the four borewells in the command area of the village tank. The department has provided people with equipment, including a groundwater gauge. The deal is they will measure and record data in registers kept at the panchayat office.

In this water-starved region, villagers grew paddy and sugarcane during monsoon, and maize in winter. Farmers explained things were changing fast and that water table was falling. Borewells were drying up or giving less water each season. The Peddachevru tank, the village pride, with a catchment of 68 ha and irrigating 87 ha had gone dry this year—the first time in their recorded memory. The groundwater level in the village was already between 76 and 91 metres.

Under the project, the village has mapped its water systems: the village with 409 households has some 600 functional bores. In addition, it has three big water tanks and many small tanks, which are used for irrigation and recharge of groundwater.

P Laxma Reddy, president of the village water association, believes people will shift to crops that require less water. “Since we started recording groundwater we know how much water we are consuming. We can now calculate how much water and power we need to grow a particular crop,” he said. According to him, if paddy requires 50 litres of water, sugarcane needs 30 litres and maize 15 litres. Now based on this rough estimation, budgeting has to be done.

But as yet, people in the village seem unconvinced. The groundwater monitoring is showing an overall decline— some 0.5 metres over the last season—in the four monitored wells. People say this is because of poor rainfall last year. As yet, the declining water levels have not deterred them from digging for more liquid gold—in just last year, Yavapur has dug another 50 borewells, of which they struck gold in 10.