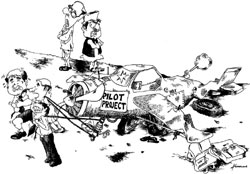 It has all the elements of a slugfest among eminent personalities in the public sphere. It would have made great entertainment; only it has to do with education. Science education, actually, in village schools with poor facilities.

In an August 8 order, Amita Sharma, secretary (elementary education) to the government of Madhya Pradesh (mp), directed collectors of 15 districts of the state that a uniform curriculum, textbooks and examination system would be followed across the state. It said that if any schools wished to use the Hoshangabad Science Teaching Programme (hstp), it would be supplementary to the main curriculum notified by the state government. This brought to an end a 30-year-old partnership involving the state government, non-governmental organisations and well-known academics in a programme that was to create an alternative to the learn-by-rote approach to science education. hstp explains science through experiments, observations and analyses, rather than mugging up books and concepts that children may not have understood even. (For a background on the hstp see box: For those who came in late ).

It was the culmination of events set into motion in December 2001, when member of the legislative assembly from Itarasi, Sitasharan Sharma of the Bharatiya Janata Party (bjp), complained to the district planning committee (dpc) of Hoshangabad, hstp's birthplace, that the programme be discontinued. He reasoned, among other things, that the programme had no link with the way students were taught before or after classes six to eight.

On February 7, 2002, the committee recommended that the state government close the programme in the district. The minister chairing the meeting declared the decision was unanimous. But things weren't that simple. Nine of the 12 members of the dpc wrote to the collector of Hoshangabad, also the secretary of the committee, to review the decision, points out Eklavya, the ngo created to run hstp in 1982. The review meeting was held on May 9, chaired by another minister. But the nine members who had asked for the review were not willing to put their money where their mouth was. The dpc reiterated its earlier decision and left the matter to the chief minister as a government review of the programme was underway.

On July 3, the secretary of elementary education sent an order to the Hoshangabad collector, with copies marked to collectors of 13 other districts that had schools running hstp. It said that schools in Hoshangabad would employ standard teaching methods used across the state. Schools were free to use hstp as long as it was supplementary to the main curriculum. Eklavya representatives say government was so high-handed that it didn't bother to inform them of the decision, and they found out only on July 11. The government says its decision is based on a transparent review. This point onwards, everything is controversial.
Eklavya's response was almost immediate. It urged the chief minister, Digvijay Singh, to withdraw the order and base his decision on an in-depth and independent academic review. The organisation started writing to its large network of academics and activists, organised a press conference and later a dharna to protest the decision. Eminent scientists, educationists and technocrats -- Yash Pal, M S Swaminathan, to name two -- have been writing to the mp government to reconsider the decision.

News stories and opinion pieces in the media have brought the matter well out of the state. Voices from the left have claimed that the Congress government in mp is playing into the hands of the Hindutva right wing's agenda of saffronisation of education. They also allege that the move is a strike at the very heart of secularism in India and the development of scientific temper among students.

The mp administration, on its part, has pulled no stops in questioning the legitimacy of Eklavya's criticism of a decision that has come out of a decentralised democratic set-up. What has particularly drawn the ire of several scientists is the way the administration has described Eklavya as a tenant (because the organisation is working in government schools). Representatives of Eklavya feel hurt by the way the government didn't consult or even inform them of its decision, especially in view of the 30-year partnership. Here are some of the reasons the government has put out explaining its decision:
• The administration's review of the programme showed that children studying through hstp did not fare all that well in critical exams like the 10th standard board exam. Their results in science were average.

• There is a reason for parental anxiety about children having to adapt to the examination system and standard textbooks after three years of hstp-style instructions.

• The request for discontinuing hstp came from a local, district-level body of elected representatives. In a decentralised system of governance, the state government had to take the local body seriously when it requested that its schools have the same curriculum as schools in the rest of state.

• There should be a common set of textbooks across the public schooling system for children who have to undergo a common evaluation.

• The government offered the following to Eklavya: to inculcate the best elements of hstp in the main curriculum; to assist the state council of educational research and training; to train teachers in science education and for development of resource support materials.

Eklavya and its resource persons have come up with elaborate critiques of the government's arguments. Vinod Raina, former associate director of Eklavya, says there is no point in evaluating the educational impact of an experiment-based system of instruction through exams that rely entirely on the child's ability to memorise, not necessarily comprehend, lessons: "A review of hstp should take into account the difference in pedagogical approaches."

Raina has written a lot of rejoinders to the government arguments. "If the government is so concerned about the local institutions, why did it not consult the dpcs of the 13 other districts that had not complained about hstp?" he asks. In fact, Raina is critical of the way mp government has gone about the decentralisation drive, saying that the government is casting aspersions on the legitimacy of organisations like Eklavya to gain legitimacy for its own programmes.

Why then did Eklavya not attempt to engage local institutions of governance, like the panchayats, in hstp? Raina says involving panchayats would have required getting into the polarised local politics between the Congress and the bjp.

Anil Sadgopal, one of the founders of hstp and now the dean of University of Delhi's department of education, acknowledges that the people running the programme failed to engage the local polity: "At the time we began work in 1972, there was no emphasis on decentralisation. In fact, centralisation was the buzzword." Since the educationists were in touch with the top echelons of the bureaucracy, they didn't realise the need to engage local politicians, he says.

He says there is no way an hstp-like education can be imparted as 'supplementary' to a curriculum that revolves around learning by rote: "You are talking about two entirely different modes of instruction; two different ways of looking at the world. If you want education to be contextual and reflective of the diversity of the world, you cannot have national and state educational research councils writing books for the entire country." He is looking forward to a meeting with the chief minister.