Natural dyes, now popular in the West, are yet to make it big in the Indian market, reports R V Singh
(Read full article) 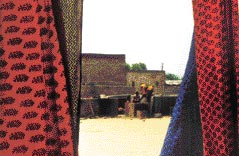 The Bandi river in Rajasthan is dying. Flowing through various villages of Rohet tehsil in Pali district, its water has a reddish hue like red rum. It can no longer be used for irrigation or drinking. "Even animals do not drink this water," says Gangadhan Charan, a resident of Gadhawara village. The area is known for its small scale textile industry, which mainly uses chemical dyes.

Not far, in the metropolitan city of Delhi, Pasha is a lively, young working woman. Like her friends, she wears cool, trendy clothes and favours a couple of retail outlets, known for their naturally dyed handloom garments. "I do not want chemicals against my skin. If I can use natural colours for celebrating Holi, why not in my clothes?" she asks.

Surprisingly, while a few people in cities are moving towards natural, villagers are straying away from tradition in their sartorial preference. "Clothes dyed with chemical colours became popular as they promised a low price and colour fastness," informs Ram Kishore Derawala, owner of a traditional dyeing and printing workshop in Bagru village. Derawala supplies clothes and dress materials dyed with natural colours to the handloom outlet that Pasha and her friends frequent.

"Our market has shifted from villages to cities as people from towns and cities like our clothes," he adds. Derawala, who has been in the traditional dyeing business for decades, believes that natural colours are the future.


Natural dyes are colourants, with application in textile, paper printing inks, food, drugs, cosmetics and paint industries. Small quantities of these dyes are used for colouring leather, shoe polish, wood, cane and candles. However, in India the textile industry alone consumes nearly 80 per cent of natural and synthetic dyes.

Natural dyes, mainly used on textiles, are extracted from plants, animals and minerals. Also known as vegetable dyes, these are made from various plant roots, leaves, tree bark, flowers and fruit rind. The rind of pomegranate yields a golden yellow colour, indigo leaves are used to obtain a deep Prussian blue. "There are nearly 500 plant species in India that yield colour," informs M L Gulrajani, professor in the department of textile technology at the Indian Institute of Technology (iit), New Delhi. Even animal residues like the secretions of insects like the cochineal, kermes and Kerria lucca or lac insect or the urine of a cow are commonly used in natural dyes.

Interestingly, earliest evidence of the use of natural dyes dates back to more than 5000 years old with madder (Rubia cordifolia) dye cloth found in the Indus river valley at Mohenjodaro (see box: Mad about madder). "But dyes may be older still, as few examples of early textiles have survived in India due to climate and burial customs," says V P Kapoor of National Botanical Research Institute (nbri), Lucknow. Ancient Indians knew about mordants or addition of metallic salts that increased dye fastness and textile trade flourished.

India's supremacy in natural dyes was challenged in 1856 with the manufacture of the first synthetic dye stuff 'mauve'. But as it faded easily, it did not become popular. In 1868, two German chemists Carl Graebe and Carl Liebermann, produced alizarin or synthetic madder. This was the first synthetic substitute for a vegetable dye. By 1880, the colouring matter present in madder and indigo, the most important natural dyes, was synthesised and marketed successfully in Germany.

However, the major breakthrough in synthetic dyes came with the German chemist, Peter Grier's discovery of the diazo reaction. This was a chemical reaction between aromatic salts, containing a double bond of nitrogen, with an alkaline solution of an aromatic compound, which yielded a brightly coloured, red or orange dye.

The azo group of synthetic dyes, based on the diazo reaction, proved most versatile. These dyes promised bright colours, colour fastness and the ability to dye synthetic and natural fibres directly without addition of a mordant. Synthetic dyes were mainly manufactured in Germany until the First World War.

With vigorous development in the technology of printing, manufacture of dyes metamorphosed into a big industry. Today, there are 3000 azo dyes in use worldwide, accounting for more than 50 per cent of the commercial dye market.

Unfortunately, there is no sure way to distinguish between natural and synthetic dyes except by laboratory analysis. Skilled dyers judge fabric fading and bleeding. "But this method is often fallible," comments Gulrajani.

Synthetic dyes soon left the traditional market far behind. "The global consumption of natural dyes is around 10,000 tonnes, which is just one per cent of total synthetic dye production," Kapoor informs.

"In Bihar, known for its Madhubani paintings, who has the time and patience to extract lamp black or soot when black poster paint is available off the shelf?" he asks.

Chemical dyes were also cheaper than natural ones. For instance, in India, it costs a farmer Rs 600 to grow and process one kilogramme of indigo for which he is paid Rs 800. Synthetic German indigo is available at Rs 600 per kg. "The price differential in natural dyes tempts dyers to choose chemical colours, without adequate knowledge of its aftereffects," says Derawala.


Research has shown that with sweat and friction, some carcinogenic aromatic amines in synthetic dyes can get absorbed through the skin. Ironically, Germany that discovered azo dyes, became the first country to ban the import of certain azo dyes in 1996. The popularity of azo dyes had destroyed the traditional dye market in India. Now Germany wanted to promote traditional colours. The circle was complete.

The ban order clearly stated, "Articles that regularly come into contact with human body must not be dyed with specific azo dye stuffs, known or suspected to release harmful amines, which are allergic, carcinogenic or poisonous." This meant an import ban on 120 to 150 out of more than 3000 azo dyes. These specific dyes were based on diazo-benzidines and benzidine derivatives, suspected to be a major cause of cancer. Other countries including Netherlands and Austria also followed suit with the ban. Even the Indian Environment ministry prohibited handling of these specific azo dyes stating that these were 'cancer causing and detrimental to human health'.

Chemical dyes are cheaper to manufacture, but prove expensive. Dyeing is a water intensive process. It is difficult to dispose the wastewater containing residual dye. According to Peter Hauser, professor, college of textiles, North Carolina State University, 'a textile manufacturer who produces 500,000 kg of dyed knit fabric a month will discharge 50 million litres of water along with 370,000 kg of solid waste. One kilogramme of dye requires 20 litres of water.' Chemical effluent treatment has prohibitive costs.

Disposal of wastewater from natural dyes, more expensive to manufacture, is not a problem. "We just throw the water used for making the dye into the fields. It has organic content and is safe for our fields," Derawalla informs.