Famines in India are a nightmare of the past

A WHO study notes that While India has achieved impressive levels in food production, equitable distribution is still a distant dream. Chronic hunger still persists, but severe,nutrition-related diseases have almost disappeared.

Famines in India are a nightmare of the past 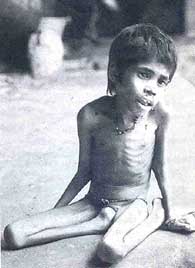 INDIA has shown commendable achievements in health and nutrition in the past 40 years and C Gopalan, former"director-general of the Indian Council of Medical Research, considers the "most outstanding achievement" to be the virtual banishment of large-scale famine.

In a study recently released by the World Health Organisation (WHO), entitled Nutrition in Developmental Transition in Southeast Asia" Qydpalan notes the Bengal famine of 1943 was the country's last great famine. The muchpublicised Bihar famine of the 1960s, he contends, was "a famine that never was" because the government implemented employment generation and food supply programmes. Another achievement, he says, is that foodgrain production has been kept above the massive population growth and per capita availability of cereals has increased from 346.47 gin per dey in 1965 to 424.52 gm. in 1988.

Nutritional deficiency diseases such as beriberi, pellagra and kwashiorkor have either disappeared or been reduced considerably in incidence. Better nutrition and health care have pushed up Indian life expectancy; in fact, the -figure for women is now better than that for men. Between 1965 and 1989, male life expectancy moved up from 46 to 58 and One achie female life expectancy from 44 to 59.

Another distressing Seetere has been the decline in jowar, baira, still end up with a staggering estimate of more than 215 million hungry people," Gopalan says.

Gopalan asserts environmental change is steadily becoming an important cause of nutritional deficiency. Water resources, for instance, are under severe pressure because though the demand for drinking water is increasing, water resources are getting polluted.

Gopalan is especially concerned that a decline in fisheries is "looming large in several countries of the region because of several practices and technologies that have become a part of the development process." His concern is because fish is a cheap source of nutrition for poor communities living in river basins and along coasts.

Embankments prevent young fish 'from entering -small ponds and wetlands, and dams prevent the migration of fish species, leading to their decline. Severe damage also is being caused to fisheries by toxic industrial effluents, with the most notable metallic pollutants in India, Indonesia, Bangladesh and Jhailand being mercury, lead, cadmi m, copper, zinc and chromium. Human waste and untreated sewage and pesticides used extensively in modern agriculture damage fisheries even more.

An anomaly noted by Gopalan is that lathyrism - spastic paralysis of lower limbs - which used to be seen often in Madhya Pradesh because of excessive consumption of the pulse, kesri do] (Lathyrus sativus), is not reporte 'd as often now. The credit, however, does not go to doctors but to "market forces" because, according to Gopalan, it is more profitable to export the pulse outside the state so it can be used to adultarate more expensive pulses.

Gopalan suggests nutrition goals should be set to meet the challenges of the next few decades and these must include the elimination of three major, nutrition-related health problems - goitre, hypovitaminosis and iron-deficiencyanaemia. The nutri- tion of mothers and children should be improved so as to reduce by 50 per cent the incidence of low birthweight deliveries and to minimise the extent of growth retardation in children under five. Gopalan, finally, stresses the need to curtail the dietary excess'es of the affluent, which result in obesity, degenerative disease and cancer.