Fanning the flame of science

At a recent convention held in the Capital, the Bhartiya Jan Gyan Vigyan Jatha took stock of the ways to popularise science among the common people

Fanning the flame of science 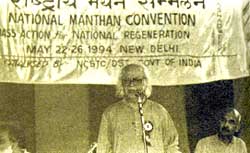 IT IS through very unscientific songs and plays on subjects close to the quotidian concerns of the villagers that the mission that the Bhartiya Jan Gyan Vigyan Jatha (BJGVJ) started met with success. The thespians took into account matters that were close to the hearts of villagers -- agriculture, forests, water management, health and environment. The movement BJGVJ that was launched in 1992 by the National Council of Science and Technology Communication, a division of the Department of Science and Technology, has come a long way. It was time to take stock at the national convention held in New Delhi from 22 to 26 May.

"The mission of BJGVJ is a dream," says Yashpal, chairperson of the Jatha and former chairperson of the University Grants Commission, "It was born out of a desire to share with the people what we have learnt from our scientific institutions." The way to this knowledge, he feels, is through mass participation: "The change must come from below."

But mood of the convention was not so enthusiastic. Delegates from the 350 district organising committees of the Jatha conveyed a feeling of cautious enthusiasm. Says K Papparao, a 45-year-old village schoolmaster from Andhra Pradesh, "We are tired of the developmental projects launched by the state. It is the people who know what is best for them." Papparao says that the Jatha has adopted over 100 villages in the Khamman district, where volunteers have tried tackling problems of pollution and hygiene. "Although the programmes are appreciated by the people, for most it's just entertainment. But every little counts."
Papparao is not alone in his apinion. According to Biswajit Choudhury, a 28-year-old schoolmaster from Nalbari in Assam, "There are 12 local organising committees in Nalbari and we have held a number of exhibitions in villages on pollution and hygiene." Biswajit found the villagers to be very enthusiastic and there were several instances of people approaching the organisers to hold similar programmes in their villages. The high point of their activities was a healthy baby contest. "It is the first time that such a contest has been held in Assam," he claims proudly. Biswajit feels that "the Jatha has made its presence felt and if the people continue to support us, we can do a lot more." His confidence stems from the fact that financial support from the government was minimal and the "people contributed whenever we asked them". S K Singh, a social worker from Allahabad, was more restrained: "Movements like the BJGVJ are appreciated by the people, but frustration among the volunteers can set in soon." However, Singh is enthusiastic about the changes that the Jatha has been able to implement during a mass mobilisation phase. "The dedication of the volunteers paid off and we were able to construct 2 kilometres of kuchcha,/I> road in the Suhas-Owari village in Allahabad district," he claims. Several delegates felt that as long as "the people in the villages have faith in us, funds will never be a problem". Says C Sadasiva, teacher at a college in Delhi, "BJGVJ has always been a loosely structured organisation. We have more faith in the organising committees at the district and local levels."