The Netherlands' position as an agricultural superpower stands threatened... unless it shifts to eco-friendlier organic cultivation 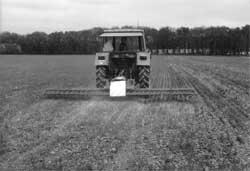 how has a tiny country like the Netherlands managed to become the world's third largest exporter of agricultural products? The answer to this also explains the ecological crisis Dutch agriculture confronts today: the intensive use of fertilisers and pesticides. Even though estimates drawn by the Centre for Energy-Saving and Clean Technology in Delft point out that 104,000 farms are causing environmental damages to the tune of us $2.6-4.2 billion per year, what appears more impressive is the us $22 billion-per-year turnover produced by Dutch farmers. The contamination of the soil and drinking water by chemical pesticides; the occurrence of acid rain due to ammonia emissions or the high levels of energy consumed by conventional Dutch agriculture are hardly accounted for as costs.

But why should these figures be highlighted at all? Because agriculture in the Netherlands is a picture of that inequity which exists between conventional and organic farmers. Yes, the alternative to pumping the soil with artificial inputs is organic agriculture. But the economics of this alternative is not as attractive because not using chemical pesticides and fertilisers not only means lesser environmental damage but also lower production per hectare and greater labour costs for weeding. This makes, for instance, organically-grown potatoes more expensive than traditionally-grown ones and puts both the organic farmer and the buyer at a financial disadvantage. The result: there are but 606 organic farms (a mere 0.6 per cent of the total number of farms) with a market share of less than one per cent of the total food sales.

A multi-pronged effort is on to popularise the concept in the Netherlands. The two main organisations seeking to obliterate the unfair competition between mainstream and organic farming are Biologica and the Platform for Organic Agriculture and Food (poaf). While the former is working on the promotion and streamlining of the organic food market, the latter is a pressure group striving for more favourable governmental policies.

The ministry of agriculture is also working on a promotion policy. Its action plan has earmarked us $30 million for the promotion of organic agriculture. Part of the amount shall be spent on accelerating the sale of organic products in supermarkets. Till date, 75 per cent of these products have been sold through health food shops. The high profile image of these outlets has been the reason why most Dutch have stuck to buying 'their' vegetables in their 'own' supermarkets.

The ministry is also planning to raise subsidies for farmers willing to shift from conventional to organic farming. Those opting to change over would badly need these subsidies as only after two years of doing so would a farmer get the eko-quality label for her or his produce - a mark that assures the consumer of a product's eco-friendliness and procures for the cultivator a higher price.

But these policy measures have not really impressed the poaf and Nature and Environment (one of the Netherlands' largest environmental organisations). They feel that the government is acting at a snail's pace specially if one were to compare Dutch performance in the field with the track records of other European nations. In Austria, 10 per cent of the area is organically farmed (ten times as much as in 1990). In Denmark, 15 per cent of all dairy products sold are organically produced. The Danish government aims at a market share of 15-20 per cent for all organic products by the year 2000 and 20-40 per cent by 2010. Similar developments are also underway in Germany.

According to Marijke Brunt, of Nature and Environment, despite the action plan to bolster organic farming, traditional agriculture is still held in high esteem within the ministry. "The motto has always been to produce as much as possible with as little costs as possible," says Brunt. Philip Scheepers of the poaf agrees. He also feels that the gap between traditional and organic agriculture is bigger in his country than in any other as "Dutch consumers have been spoilt with cheap food". More value seems to be attached to good, healthy and tasty food in other nations because consumers there do not mind paying more for the same.

Scheepers feels that the need for strong governmental support to organic farming is much greater in the Netherlands than anywhere else as the use of chemical pesticides in the country is so massive (the highest level of use per hectare in Europe) that a significant reduction in the same would call for a very big change.Towards this end, poaf and Nature and Environment suggest among other things, a reduction or even abolition of value added tax on organic products.

But part of the responsibility for making a success of the concept rests on the market itself. Indeed, Biologica has been lobbying with Albert Heijn, the Netherlands' biggest supermarket chain. Albert Heijn now sells organic potatoes, carrots and onions and some branches have recently begun selling dairy products.

Meanwhile, several organic farmers are finding their own solutions. They are refusing the props offered by both the government and the major supermarket chains. Some are creating their own smallscale and regionally-oriented distribution methods. Organic food outlets have been mushrooming and now 15 Dutch cities house markets run by these farmers themselves. For farmers and consumers, this has proved to be a financially attractive proposition as they now strike direct one-to-one deals. The farmer gets a higher price for the produce and the customer pays less than what he would for his organic shopping in a supermarket or a health food shop.

Another novel method of accessing these products would be subscribing to a weekly basket of organic fruits and vegetables or dairy products - as one would a newspaper - from the neighbourhood organic farmer. Such a system offers a more secure income for the farmer as the subscription rate is paid in advance. And to the consumer it offers a fresh, healthy and locally-grown alternative at a reasonable price each week. Many variations of this arrangement are in operation, including one in which consumers are shareholders in the farm and receive their part of the profit in the form of garden produce. Called 'community-supported agriculture' in the us, the system has become quite popular.

However, despite all these initiatives, the existing markets and subscriptions are insufficient to absorb the 35 per cent of Dutch farmers interested in switching over to organic agriculture. Drastic measures are called for. If something is not done fast, the country's position as an agricultural superpower stands threatened. Already, the pollution caused by Dutch agriculture has given it a bad image abroad, especially in Germany, which is the country's most important export market. If the growth of organic farming in the Netherlands lags behind, Dutch exports could face stiff competition from the progress abroad.

Nevertheless, organic agriculture definitely fares better in the Netherlands today than it did 15 years ago, when it was seen as something meant for idealistic amateurs. De Boerderij (The Farm), the country's largest mainstream agricultural weekly, now carries articles on organic farms more regularly. But surely, the most interesting development would be the catering of organic meals by the restaurant in the ministry of agriculture.