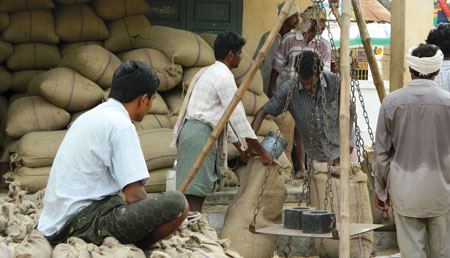 Achanta, a small village in Andhra Pradesh, hit the headlines in 1967 with a record rice yield in the kharif or monsoon crop season. It was the time of the Green Revolution. N Subba Rao, a farmer from the village, harvested three tonnes of paddy from just one kilogramme of seeds. Other farmers followed suit and the village became a model for intensified rice farming.

Achanta is in the spotlight again, this time for declaring a “crop holiday” ahead of the kharif season. Despite a bumper yield of paddy in the rabi or winter crop season this year, 3,500 farmers of the village have decided to stay away from paddy cultivation. “The decision is sad and harsh but we have no choice,” says Subba Rao, now in his seventies. “While the cost of cultivation is rising, we do not even get the minimum support price (MSP) for our grains. Besides, there is no storage space or buyers,” he says ruefully. The International Rice Research Institute felicitated him with the Outstanding Rice Farmer of the World in 1985.

Farmers in other villages in West and East Godavari districts, which fall in the fertile Godavari-Krishna delta and are known as the state’s rice bowl, have also declared a crop holiday. The sentiment is fast spreading across the state.

Farmers say the main reason for the unrest is they are not able to sell the bumper rabi harvest, which they grew despite heavy losses during the previous kharif season. Excessive and untimely rain had destroyed kharif crop in large tracts of the state last year. Small tenant farmers are the worst-hit. Since they are not eligible for government compensation for crop loss or bank credits, they grew the rabi crop with high-interest loans from moneylenders. “We reaped a good harvest but are not able to earn from it,” says G Ramachandra Rao of Sannavalli in East Godavari. The only way to reduce the loss is to not grow paddy this kharif, says Satti Lankanna, another farmer.

According to government statistics, the state produced 14 million tonnes of rice in the agricultural year of 2010-11. This is an increase of 32 per cent over the previous year. But FCI’s storage capacity for rice in the state is 3.6 million tonnes. By mid-June, millers, the Civil Supplies Corporation and paddy purchase centres of Indira Kranthi Patham, a women empowerment and poverty alleviation scheme, had procured only 7.5 million tonnes of paddy.

Even during the last kharif and rabi seasons, the warehouses were full and the government did not procure paddy from most. “Farmers are now left with about 4.5 million tonnes of paddy unpurchased,” says Yerneni Nagendranath of Rythanga Samakhya, a federation of farmers’ organisations. Farmers had been urging the state and Central governments to make space for the new rabi arrivals since August last year. But nobody bothered to listen, he adds.

The result is paddy remains stacked in open fields in several villages. Many schools are also functioning as storage houses. With the onset of monsoon, farmers are selling paddy at a throwaway price—one-third of MSP or even less.

Analysts and farmers’ groups say the problem lies in the state’s procurement system and the way MSP is calculated. Other states procure paddy directly from farmers and give it to millers for processing, while Andhra Pradesh buys through millers, who hand over 75 per cent of the procured paddy to FCI after processing it. They are allowed to sell the remaining 25 per cent in the open market. FCI reimburses them and pays for the processing and transport costs, after millers produce documents showing they have paid MSP to farmers. “Millers never pay MSP to farmers,” says Chella Lakshmana Rao, a small farmer of East Godavari. They often prepare false documents and bribe officials to get them approved. They make double profit by buying paddy at a lower price and selling the by-products like broken rice, bran and husk, he adds. 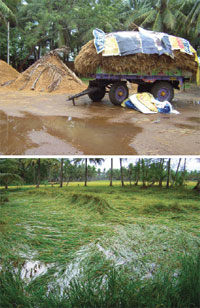 Besides, MSP, which aims to avoid distress sale and protect farmers from exploitation, fails to protect them from growing inflation. The Commission for Agricultural Costs and Prices, which fixes MSP every year never considers inflation, increase in cost of cultivation, cost of living and the management and transport expenses, says Nagendranath. The cost of cultivation has doubled from Rs 10,000 in 2005 to Rs 20,000 an acre (0.4 ha) in 2010 due to increase in the cost of fertilisers, pesticides, seeds and labour, he adds. But there is no corresponding increase in MSP. In 2008-09, MSP for paddy was Rs 850 per 100 kg. It was marginally hiked to Rs 1,030 in 2010.

In 2006, the Commission on Farmers Welfare, headed by agriculture scientist M S Swaminathan, recommended MSP should be 50 per cent over the cost of cultivation. The Centre is yet to accept the recommendation.

Farmer activists also criticise the state’s anti-poverty scheme that provides rice at Rs 2 a kg. After launching the scheme in 2007-08, the government restricted the price of fine rice at Rs 20 a kg and restricted inter-state grain movement to stabilise the open market prices. The price of Sona Masuri, a popular variety has since declined from Rs 1,250-1,500 a bag to Rs 600-750. “The government is subsidising rice at our cost,” says Nukala Naidu, farmer of East Godavari.

Since warehouses are full and there is no space for new procurement, big farmers and leaders of both the ruling and opposition parties demand the Centre should allow Andhra farmers to export at least 2.5 million tonnes each of Sona Masuri and other superfine varieties. P Chengal Reddy, chairperson of Confederation of Indian Farmers’ Associations, says this will help farmers get a better price for their produce just the way Punjab and Haryana farmers get by exporting basmati varieties as well as Pusa 1121, a non-basmati variety. But the Centre recently allowed Andhra farmers to export only 0.1 million tonne of Sona Masuri. This has sparked discontent among farmers who say the Centre favours North Indian farmers. K V Thomas, the Union minister of state for food and civil supplies, says large-scale export of food grains cannot be permitted as the country would need 70 million tonnes of grains when the National Food Security Act gets implemented.

But is export a solution for the farm crisis in the state? No, say agricultural experts like G V Ramanjaneyalu of the Centre for Sustainable Agriculture, Hyderabad. That benefits only millers and traders. Madhya Pradesh has 60 per cent of the cultivated area under soya bean and it exports almost the entire produce. But it has not benefitted the farmers, he explains.

Shunning of paddy cultivation this kharif by increasing number of farmers has caused a political divide. Bharatiya Kisan Sangh, a Sangh Parivar organisation, and several opposition parties have extended support to the farmers’ decision. CPI(M)-affiliated All India Kisan Sabha says the move is useless.

The government in the second week of June lifted restrictions on the inter-state grain movement and promised to procure the entire produce directly from farmers. The Centre has also increased the MSP for paddy by Rs 80.