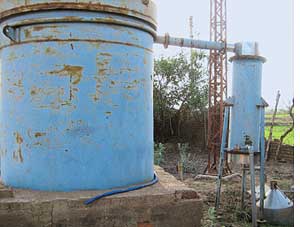 This summer if you use a prickly heat powder manufactured by Emami think of Agricon Agropreneurs Limited. The Raipur-based public limited company supplies mentha, a common ingredient in many beauty products, to the cosmetic major. Set up two years ago, Agricon has given farmers much-needed clout in their dealings with cosmetic companies.

The company counts 1,600 farmers' families in three Chhattisgarh districts, Mahasamund, Raipur and Durg, as its shareholders. Agricon has set up distillation units in the four districts, where mentha oil is extracted and sold to cosmetic companies.

A farmer has to pay a minimum of Rs 300 to become a shareholder. Agricon provides initial inputs like seeds, experts on it rolls guide the farmers, and the company has roped in Emami to sponsor two distillation units in Mahasamund. Two other units operated by Agricon at Raipur and Durg were partially funded by the National Horticultural Mission.


The distillation unit at Khamaria village in Mahasamund district is located on farmer Arun Chandrakar's 5.6 hectare (ha) tract. Chandrakar and a few other farmers were trained by Agricon experts to run this biomass-fuelled unit.

Meticulous account is kept of the oil extracted from each farmer's produce and the producer is paid accordingly. A farmer gets Rs 125 for a kg of the herb, which yield about a litre and a quarter of oil. The oil is then taken to Agricon's collection centre in Raipur and sold to cosmetic majors. "We tie up with companies to ensure that farmers get good returns," says Rajneesh Awasthi, an Agricon director.

Seventy five per cent of the profit is divided amongst farmers, while Agricon retains 25 per cent to distribute as bonus at the end of the year.

Mentha grows between January and June along with the summer paddy. After that the field is cleared for rabi paddy, Chhattisgarh's main crop. "Experts guide the farmers in planting mentha in a way that it does not disturb the original cropping pattern," says Sanket Thakur, an Agricon director. The guidance is important because the success of mentha has led many farmers to increase the area under the herb. Chandrakar, for example, had planted mentha in less than a hectare last season, but has increased the area under the herb to 2 ha.


Agricon plans to diversify. "Middlemen profit most from paddy sale. It's important that farmers mill the rice themselves. So we are trying to set up a mini rice mill in Mahasamund district by next year," Thakur and Awasthi say. The company is not new to running mills. In 2007, it helped farmers in Mahasamund mill kodo kutki, a local millet variety. The farmers used to sell this nutritious millet for Rs 14-15 per kg. But after they began to clean it and mill it, it fetched them Rs 30-40 per kg.

Agricon launched kodo kutki as a health food at a fair in Raipur last year. "It was a great hit," says Thakur.

The company has its share of problems though. Labour is the biggest. "Mentha is a labour-intensive crop. Twenty labourers are required to water, weed and harvest mentha on a one acre tract for two days. We have lost labourers to the National Rural Employment Guarantee Scheme," says Chandrakar. "We might lose a lot of our crops if we spray weedicide. The mentha leaves would get burnt," he says.

Water too is a problem. Farmers lost mentha crop in almost 20 ha due to water shortage. "But monetarily the losses were not very huge since farmers did not have to spend any money on seeds," Awasthi says.

Farmers are also concerned over the support price set by cosmetic companies. Awasthi, however, says that the company negotiates the price of mentha oil with Emami and other big buyers based on the previous year's production.

"This is only our second year in business. Last year some crops were destroyed, so support prices were low, Agricon representatives say. In 2007, the support price was Rs 300 per litre, it's now set at Rs 350 per litre, they say.