Small farmers protesting the monopoly of multinationals over the world's food resources take to the streets in Bangalore. 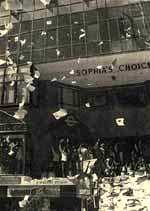 THE RECENT attack on the Cargill Seeds India Pvt Ltd office in Bangalore, by members of the Karnataka Rajya Raitha Sangha (KRRS), is evidence of the growing awareness among Indian farmers about "gene thefts" by multinational corporations (MNCs) of the genetic resources of the Third World.

More such attacks can be expected if a proposal by Arthur Dunkel, secretary general of the General Agreement on Tariffs and Trade (GATT), is passed. As developing countries form the richest source of plant and animal genetic material in the world, such patenting would give seed MNCs a monopoly over the world's food resources.

The Cargill attack was triggered by a publicity blitz initiated by a non-government organisation called Gene Campaign, which contends that hybridisation and patenting of plants and animals would lead to further enslavement of the farmers in the developing world and to the erosion of biodiversity. The NGO activists said the farmers would be reduced to depending on private companies for their seed requirements. As a consequence, be even "forced to sell their land" if the government accepted the Dunkel recommendations and allowed foreign patenting of India's plants and animals.

The central question now is who should benefit from a particular kind of seed: the farmer who has cultivated crops from the seed or the MNC that has modified the seed into a high-yielding one?

MNCs stand to gain tremendously if they can monopolise genetic resources. Most of them already produce pesticides and fertilisers in addition to high-yielding varieties (HYV) of seeds, and if the full potential of HYV seeds is to be realised, all three must be used together. For example, Hoechst, a German MNC that manufactures pesticides in several developing countries, has a seed division, which gathers different kinds of seeds from various developing countries and converts them into HYVs. These are then resold to the countries of origin along with pesticides and fertilisers. Once India signs the Dunkel draft, the MNCs will get a hold over India's crop patterns and agriculture.

Large farmers in India have already taken to this method of crop production. KRRS, however, draws most of its support from the small farmers who will be the worst-affected if the MNCs move in. The lack of support from the large farmers has not deterred KRRS president M D Nanjundaswamy from drawing up a statewide agitation plan against Cargill. "We give the Cargill company one month to close its plant in Bellary," says Nanjundaswamy, who is also a member of the state legislative assembly.

Cargill has just set up a Rs 7-crore plant near Bellary in Karnataka, which will develop hybrid seeds of sunflower, maize, sorghum and pearl millet. The company hopes to meet a quarter of India's demands for sunflower seeds through the Bellary plant. Senior Cargill personnel are perplexed by the farmers' attack and contend the company has teamed up with 3,000 farmers in Karnataka for the production of sunflower seeds. Cargill managing director John Hamilton says, "We do not know why we were singled out for attack."

Meanwhile, other seed companies in Bangalore, including Pioneer, Indo-American Hybrid Seeds and Godrej are seeking police protection to pre-empt possible attacks on their plants by the irate farmers. The Indo-American Chamber of Commerce, the US embassy and businessmen have all denounced the attack as a "dastardly act".

But Nanjundaswamy is undaunted and talks now of going on a "seed satyagraha" if India accepts the Dunkel proposals. Leaders of several farmers' organisations and agriculture experts -- Mahendra Tikait of the Bharatiya Kisan Union, Ajmer Singh Lakhowal of the Bharatiya Kisan Union (Punjab), M S Swaminathan, Bhanupratap Singh, S K Sinha of the Indian Council for Agricultural Research and Nanjundaswamy -- are now planning to meet and thrash out a plan of action against the adoption of the Dunkel Draft.