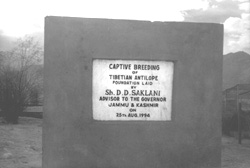 Breeding of wild animals in India has been unsuccessful, point out several wildlife conservationists. However, several similar ventures have succeeded in other parts of the world. While China has successfully bred musk deer, India has failed to do so despite three breeding farms (see box: Musk deer: smell of failure ). Even if the breeding efforts succeeded, it would not have been possible to sell the extracted musk as the Wildlife (Amendment) Act, 1991, prohibits this, a forester points out. The point is that China made the required technological and financial investments, which were ignored in India -- an area that requires political and scientific will. Can the chiru can be bred in captivity? The question cannot be answered till an effort is made to find the answer, scientifically.

An effort was initiated in 1994 to breed the chiru in captivity when the Tibetan Antelope Breeding Farm was set up in Leh, Ladakh.At that time, j & k was under governors' rule . "The interest died as soon as the governor's rule ended," says Abdul Rauf Zargar, wildlife warden in Leh. Peerzada Gulam Ahmad Shah, j & k's minister of forests and wildlife, was not aware of this farm when Down To Earth interviewed him. The officials of the department, too, are blissfully unaware of the farm. "I have not heard of a breeding farm," said R D Tiwari, chief wildlife warden and chief conservator of forest, j & k . Pandit of the department of industries and commerce says captive breeding would require a huge amount of investment and financial support from the Union government, although no serious study has been done on the amount required. "What do they discuss in all their meetings when they know so little?" asks Punjabi.

A survey team, sent to Ladakh in 1995 by mef , reported that it "did not find any evidence of the existence of a breeding farm of the Tibetan antelope in Ladakh." The survey team comprised wildlife scientists, officials and traders who visited the Changtang region of Ladakh to study the chiru. There are strong opinions about this survey in Ladakh. "The team spent Rs 1.5 lakh on the survey, but came up with such a haphazard report," says Abdul Rouf Zargar, wildlife warden in Leh. "We didn't get any response from the mef , nor did we hear anything about the report," says Ranjit Talwar of traffic -India, a member of the survey team who hasn't heard of the breeding farm. When approached for comment, S C Sharma, additional inspector general with mef , said the team was sent to find out the state of the chiru and they did "what they were supposed to do." So, what exactly did they do? An official of Indo-Tibetan Border Police, who was stationed in the area where the survey was carried out, says conducting research by helicopter was a blunder: "The antelopes are shy animals. They ran away at the sound of the chopper."


"In India, if anyone were to talk about the chiru it is Angchuk," says Zargar. Tsering Angchuk is the range officer at the wildlife department in Leh and perhaps the only one to have conducted a thorough survey on the animal and its habitat for captive breeding. During his days as the range officer of Nubra district, he and six departmental staff went to the Daulat Baig Oldi, the chiru's habitat in eastern Ladakh in 1995 to survey the habitat. Their approach was more down to earth: they travelled on foot and ponies for eight to nine days. Angchuk relates his experience: "This area lies at the silk route and it is possible that the shed wool were collected from the bushes many years ago. "

His intention was to bring the antelopes, one or two couples, to the farm. "This mission would have been possible only with the help of the army as helicopters were required to transfer the animals, he adds. No doubt, he stated that it would require a lot of investment: But how are we to know about their survival and adaptability in Ladakh unless we try it out practically." He had mentioned the possibility of breeding the chiru in his initial survey report. Khurshid Hussain Malik, retired director of the department of animal husbandry, discusses the possibility of breeding the antelope: "A chiru can give around 250 grammes of wool a year. They should be reared and genetically upgraded to give up to 700-800 grammes without disturbing the quality." Grahame Webb, director of the Wildlife Management Institute, Australia, feels that captive breeding is not complete without gaining benefits from it by later harvesting it: "Captive breeding does not have the conservation value of wild harvest, because you can do captive breeding anywhere, with none of the rewards going back to the wild populations or habitats. Not so with ranching or wild harvest. If the wild population or habitat disappears, so do the economic benefits."

William Bleisch, researcher at the Hong Kong-based China Exploration and Research Society, says chiru are capable of giving birth every year, starting from the age of three. He mentions that this makes up for the limited number of losses each year. He argues that though numerous offspring die before they reach adulthood, it is still possible that if there are 70,000 chiru left in the world, more than 6,000 adults can be removed each year without causing the population to decline. The researcher also mentions that several attempts have been made to raise the chiru in captivity outside India, but most have failed. "The problem is not known. There is great interest in this lucrative possibility. Captive rearing of chiru has about as much to do with conservation of wild chiru as raising domestic yaks or chicken has to do with conservation of wild yak and jungle fowl."

The issue is clearly one of the government deciding if it wants an amicable solution to the problem. Romulus Whitaker, the renowned reptile expert who is forced to eat crocodile eggs as the government won't let him sell crocodile skin, says: "There may really be a problem with (breeding) the chiru. Take the failed efforts of the musk deer. But crocodile breeding was thought to be an extremely difficult proposition in the beginning. It was only when they tried did they realise that crocodiles were scaly rabbits (when it came to breeding). Making an effort is the only way to know how difficult it is to breed the chiru." But even if someone decides to do with the chiru what Whitaker did with crocodiles, poor people would not benefit from selling animal products till government lets them.