Feed it to the earthworm

That is what Lata Srikhande, a Pune housewife, did to solve her domestic waste disposal problems. Now her neighbourhood is following suit

Feed it to the earthworm 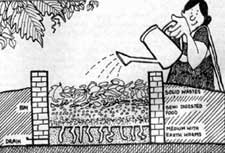 EARTHWORMS may hold the key to the problem of disposing urban waste. For the last 18 months, Lata Srikhande, honorary secretary of the Save Pune Citizen's Society, has been disposing of all her domestic organic waste, from banana peels to egg shells, in her roof-top garden which is rich in earthworms.

Overflowing municipal garbage dumps outside her flat on Pune's Kanchangulli are what prompted Srikhande to act. It was obvious that the municipal garbage collectors were too overworked to do a good job of keeping the dumps clean. The problem was compounded by ragpickers who rummaged through the pit for any recyclable waste and left a trail of garbage on the sidewalk.

After carefully studying what the ragpickers collected, Srikhande decided that their job could be made a lot easier if garbage was sorted at its source. As she puts it, "It was my intention to make it easier for them so that they leave our surroundings cleaner."

Her family did not quite take to the idea at first, but it was not long before they were convinced about the efficacy of sorting out household rubbish. Now, each member of the family religiously separates dry materials like glass and paper from fruit and vegetable wastes and puts them in two bins. The first bin is for the ragpickers, the other for the worms.

It was Uday Bhawalkar of the Bhawalkar Earthworm Research Institute who introduced Srikhande to the idea of using earthworms for garbage disposal. According to him, an "earthworm is a bio-machine and has an important role to play in solid waste management". He has started a solid waste management plant in Pune where he recycles not only organic waste, but also industrial, canteen and slaughter wastes.

There are others who have been inspired by this concept. M R Bhiday, who once taught physics at Pune University, explains that anything from cattle dung to plant and crop residues to city garbage should be fed to earthworms. In fact, that is what he does at his experimental farm near Pune.

Srikhande was at first sceptical about the abilities of the earthworm. "That earthworms could take care of any organic waste problem by consuming it and turning it into compost seemed unbelievable," she says. But her eagerness to find a solution to the overflowing garbage pits made her go ahead with her experiment.

The process turned out to be simpler and more successful than she had imagined. After feeding her garden pit with 2 kgs of vermicompost, all she had to do was put all the waste matter in the pit. Since the day she started rearing earthworms, all the organic wastes from her house has been put there. In fact, biodegradable wastes are clearly visible throughout the pit and she replaces them once they are entirely consumed. She waters the soil occasionally.

Those who have sensitive noses, or get that creepy-crawly feeling because of the earthworms, can rest assured. This form of solid waste disposal is totally safe and clean. Indeed, Srikhande's successful experiment testifies to the fact that the method has other benefits too.

Being a keen gardener, Srikhande discovered that earthworms can look after her garden very efficiently. She has stopped using any form of fertiliser or pesticide since 1982. The soil of her garden is soft and smooth in texture. More importantly, the plants she grows are healthy, the vegetables succulent.

Srikhande has taken the message of her solid waste disposal method to the rest of the community and Kanchangulli is now a busy street when it comes to waste recycling. "Feed it to the earthworm" seems to be the new slogan.

For instance, residents of the Panchadvi Housing Society, a little way from Srikhande's flat, today throw their wastes into small pits in the society complex. An estimated 200 households are presently recycling garbage in their gardens through earthworms.

Srikhande has started campaigning in a nearby school, Abhinav Vidyalaya. She believes "educating children is the most effective way of educating society because students go home and tell their families what they are taught."

Besides, through the Pune Citizens' Forum, Srikhande has campaigned at the municipality level for a concrete waste disposal policy utilising earthworms. She has even managed to convince the municipal corporation to try the method on an experimental basis.

Of course, knowing the lethargic attitude of municipal authorities, Srikhande does not think much will come out of the experiment. But this has not stopped her. Though her roof-top garden has become quite a talking point, Srikhande is modest about her achievements, saying that she is only doing "my little bit".

Over a hundred years ago, Charles Darwin professed his faith in the earthworm when he wrote, "It may be doubted whether there are many other animals which played so important a part in the history of the world, as have these lowly organised creatures (worms)." Srikhande agrees totally with him.