Fencing in territory, fencing out inequality

... the Adivasi woman is no longer a silent observer of the issues bothering her for ages

Fencing in territory, fencing out inequality 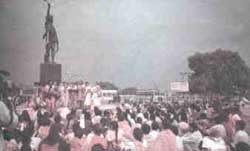 WITH the Bejing World Conference of Women, 1995, taking off on September 4, different parts of India saw a flood of meetings, conferences and seminars. The Adivasi women's conference in Rourkela, Orissa was held from June 18- 20, 1995. The conference was mainly organised by groups working in the Adivasi areas of eastern India with a perspective to develop a common understanding on the condition of the Adivasi women.

Participating groups hailed mainly from Orissa, West Bengal, Madhya Pradesh and Bihar. The Indian coordinating unit (cu) designated for the Bejing conference, which facilitated the process of building up a common understanding of different women's issues in India over the past 2 years, also participated in the conference.

Preeti Oza of the cu says, "The need to initiate discussions on tribal women's issues came up in all our meetings and forums because Adivasi women's concerns are different from those of the men of their own community as also from other women." Four groups - FARR (Friends Association for Rural Action) from Orissa, the Chhattisgarh Mahila Jagruti Sanghatana from Madhya Pradesh, Sanlaap from West Bengal and Prerna Bharti from Bihar came together to discuss issues.

FARR was given the responsibility to act as a secretariat to the conference. The tentative lists of concern were made in preparatory meetings and a general consensus We reached on the Adivasi women - development, their control natural resources and forests, their health and perspectives on traditional cultural systems.

The conference took off with different groups introducing their areas of work. The successful struggle against liquor initiated be women in Kalahandi, Orissa. inspired women from other state, to tackle similar social ills. Solidarity shown by the womer towards an Orissa group involved in the struggle for attaining control over minor forest producc against the State Minor Forest Monopoly Purchase Board.

strengthened their resolve to fight for justice. The women raised their concerns over fuelwood and fodder scarcity and the time spent in collecting these scarce resources. Several participant, expressed anxiety over the Centre's proposed forest bill and resolved to fight against it. Says a participant, "The proposed forest bill is anti-people. If passed, the government can stop our entry into small patches of the remaining degraded forests. We have to oppose it."

On the closing day of the conference, all participants pledged themselves to implement the resolutions finally adopted by the conference:

• Land titles for government distributed land should include names of Adivasi women.

• Land titles for private lands should jointly be in the names of the husband and the wife.

• Government -leased hill lands for farm forestry purpose should be in the names of Adivasi women.

• Local women should have the right to collect fodder from the village grazing land. • Adivasis, and especially the women, should have control over the sale of minor forest produce (MFP).

• Brewing and selling of all country and foreign liquor should be stopped.

• Policies must be adopted for the equal treatment of women, and violence perpetrated by traditional customs should be stopped.

• Local educational institutions should have textbooks in the mother-tongue of the indigenous community.

• The development of traditional medicine should be encouraged.

• Women should not be shown as objects in advertising mediums.

Group discussions brought out different perceptions and understandings on various issues in the conference. While discussing 'violence', the groups adopted a general consensus against the practice of dowry. Regarding women's control over forest produce, it was debated whether the control should be exercised over government forests, or village forests. It was decided that the resolution demanding the control over forest produce should be limited to village forests.

Although almost all the resolutions were unaDimously approved, a resolution demanding "equal rights of boys and girls in parental property" was opposed by a few. Silomi from Bihar opposed it on the ground that "Adivasi land could go to an non-Adivasi, if the Adivasi woman married outside the community", adding that "such cases were increasing". Kalyani ofPrerna Bharti said, "Resolutions on the issues of rights over jungle and banning of liquor are Adivasi women's concerns. Their impacts have been felt, understood and discussed by most Adivasi women present in the conference."

The success of the conference Jay in Carving out an emotional space by the participants for each other, facilitating dialogues despite major differences. Finally, the participants dispersed with a sense of solidarity, resolving to meet consistently over the coming year for formulating more action plans. The conference's resolutions are expected to come up in the Beijing women's conference as was decided.