Industrial units in Bharuch polluted the Amlakhadi river. Now, it is payback time 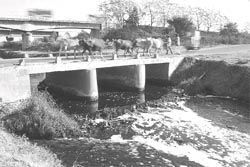 It has been a long struggle for the people living in the villages of Sajod, Pungam, Matiad and Haripura in Bharuch district of Gujarat. The Amlakhadi river -- which was one of the sources of water for these villages -- has today become an effluent channel.

For several years, more than 1,500 industrial units in Jhagadia, Ankleshwar, Panoli, Vilayat and Dahej of Bharuch district have been discharging effluents into the Amlakhadi. The river meets the Narmada river near Bharuch. More than half of them are chemical units that manufacture dyes, paints, fertilisers, pharmaceuticals, industrial chemicals, paper and pesticides.

The 1994-95 annual report of the Gujarat Pollution Control Board (gpcb) says that the chemical oxygen demand (cod) level in the Amlakhadi river is 11,007 milligramme /litre (mg/l) when the prescribed gpcb level is only 250 mg/l. Even the biological oxygen demand (bod), which stands at 442 mg/l, far exceeds the gpcb limit of 30 mg/l. Moreover, a study conducted by environment pressure group, Greenpeace, has found toxic metals such as lead, mercury, chromium and zinc in the effluents released into the Amlakhadi. During monsoon, the effluents sometimes overflow and destroy the farmlands.

For many years the villagers have been protesting against the poisoning of the river. In December 1996, the Centre for Environment, Science and Community (cescom), a Vadodara-based non-governmental organisation (ngos), helped the villagers bring the struggle onto the negotiation table with the government. "We held a series of discussions with the district collector, officials from the Gujarat Industrial Development Corporation (gidc) and representatives from the industries. Later it was decided that no new units would be allowed in the Jhagadia Industrial Estate, except the existing four units unless an effluents pipeline was laid down for Ankleshwar, Panoli and Jhagadia estates. This pipeline was supposed to take effluents from these estates directly into the sea," says Ashok Rathi, secretary, cescom.

But when the gidc allowed more industries to come up in Jhagadia even before the pipeline was laid, Jayesh Patel, a member of Narmada Pradushan Nivaran Samiti, an organisation associated with cescom, filed a public interest litigation (pil) in the Gujarat high court. The Ankleshwar Industrial Association (aia) estimates that its members generate between 250-270 million litres per day (mld) of effluents. Of this 58 per cent is generated from the manufacture of dyes and dye intermediates; 10 per cent from drugs and pharmaceuticals; and five per cent from inorganic chemicals, says a 1996 Central Pollution Control Board report.

However, many industrial units claim to have installed effluent treatment plants. There is a common effluent treatment plant (cetp), backed by United Phosphorus Limited (upl) which has nearly 192 members. The cetp has a capacity to treat around 1,000 cubic metres of effluents per day or 1 mld. The industrial units are also planning a 55-km long pipeline project that will discharge effluents from Ankleshwar, Panoli and Jagadia into the sea. This pipeline will take the effluents 14 km inside the sea.

"The high court had passed an interim order two years ago asking the industrial units to stop dumping effluents. However, the units have not stopped dumping," says Rathi. "After this judgement, no new industry will be allowed in the area to discharge effluents in Amlakhadi until the gpcb develops norms in compliance with Section 17-1-K of the Water (Prevention and Control of Pollution) Act of 1974, as laid down by the court," adds Rathi.

"We had brought to the notice of the high court that the Water Act section 17-1-(K) allows consent to be given only subject to tolerance limits of the stream where discharge is to be made ," he says . Thus the decision of the high court upholding the stand taken by GIDC in not allowing any other industry to discharge effluent before the pipeline is commissioned remained in force during full period of litigation , Rathi adds.